Recently, I watched The Man Who Saw Frankenstein Cry, a swiftly-paced documentary on ham-fisted yet sincere monster-loving actor/writer/director Paul Naschy's life and career, with plenty of comment on the prolific King of Spanish Horror Cinema from the likes of his wife and brood, as well as director-turned-commentator John Landis, Mick Garris, the unflappable Jack Taylor (a somnolent chap who squeezed many cult/exploitation/horror film roles in between international vacations), Living Dead at the Manchester Morgue director Jorge Grau, and many more, plus behind-the-scenes photos and footage, film clips, etc. Highly recommended to the Naschy fan and general Eurotrash scholars.

I've also recently caught the Brian Clemens' Thriller episode, "Screamer," featuring Legend of Hell House and The Innocents actress Pamela Franklin as an imperiled American (!) in backwoods Britain (sadly, the winsome Franklin suppressed her lovely British accent for the part and was saddled with an unflattering 'do). Clemens was known for his clever scripting of The Avengers and sundry twilight-era Hammer horrors but his 1970s UK Thriller anthology show, which I've never previously seen, has taken plenty of heat over the years. Clemens previously co-wrote and produced the suspenseful original version of And Soon the Darkness, which also starred Franklin. 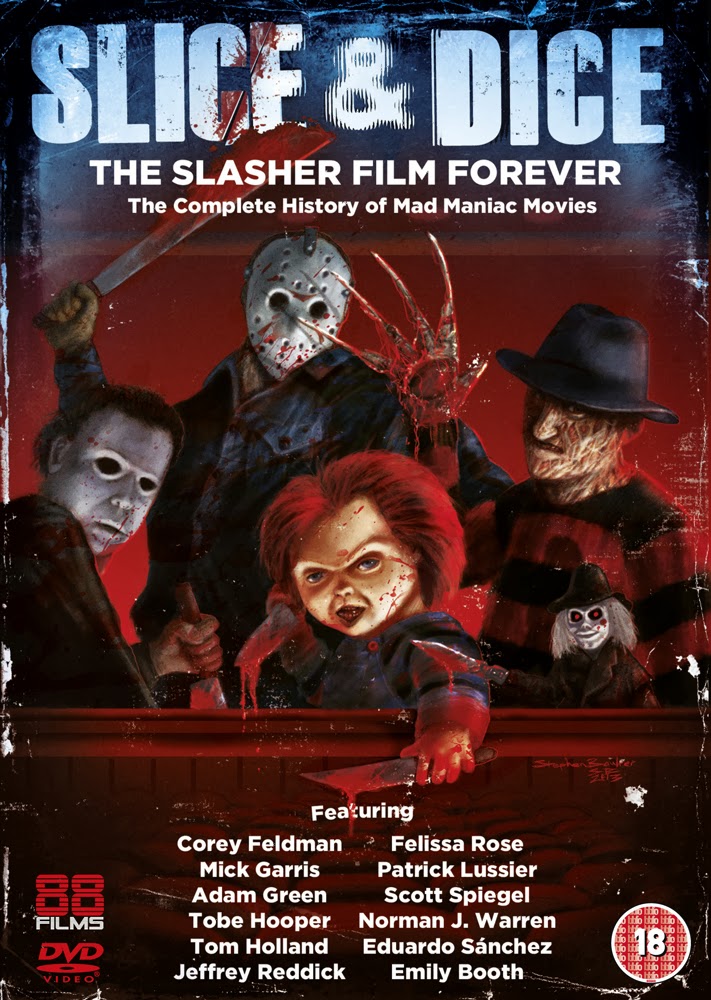 I've seen Slice and Dice, a clip-packed documentary about slasher films which included footage from Michele Soavi's Stagefright, Mario Bava's Bay of Blood and the black-gloved, straight razor-filled giallos that flooded the market between them. The production runs through the expected slasher-film antecedents: Psycho, Peeping Tom, the Italian gialli titles and Black Christmas, then gleefully plunges into the genre proper. I've also watched From Romero To Rome, another British doc charting the influence of the original Night of the Living Dead, the rise of Spanish zombies with Tombs of the Blind Dead and Living Dead at the Manchester Morgue (though they neglected the numerous Iberian Paul Naschy movies that involved traditional or Romeroesque zombies), and the effect of Dawn of the Dead and Lucio Fulci's Zombie Flesh Eaters on the genre; a good sampling of subsequent Italian movies, including Fulci's increasingly surreal oeuvre, are addressed by, among others, writer and cinema scholar Kim Newman.

I've watched Rewind This!, one of several documentaries dedicated to the rise and fall of the video market, which also includes the perspective of the Japanese as well as, included in the DVD's "special features," bits on the British Video Nasty debacle. This production should be pure nostalgia for many who read the Horror discussion lists (the psychological narcotic of nostalgia is a topic that turns up in those special feature segments as well). Rewind This! dedicates a lot of its running time to the horror and exploitation market, with veteran huckster Charles Band and others chiming in; the makers of the documentary acknowledge that the horror/exploitation market may not be the only points of interest for the retro-video fans but they are some of the most visible.

I borrowed, rented and traded videotapes through the 1980s and much of the '90s and only began purchasing them new late in that decade, at a time when the writing on their wall was "Goodbye obsolete format, signed, DVD." During the first decade of the 21st century, I began picking among flea market vendors for a few videotape-only rarities and even ordered  VHS titles from online vendors, for those films not yet on DVD....
Posted by Todd Mason at 2/18/2014 11:30:00 PM

Concerning VHS tapes, all my friends have thrown away their tapes and video players. I'm one of the few that still buys and plays video tapes, usually because the film is not on dvd. I see you also still play video tapes. I didn't know there was anyone else!

Jeff does or did, and I do at times...though I have so much stacked up on my dvr that I often don't get to my dvds/bluray dvds quickly...it's pretty sad what still isn't available on dvd, at least "legitimately"...

I still have a few hundred VHS tapes, along with a couple of hundred Laser Discs but I can;t pretend I've played them much of late ... The Brian Clemens series, made on tape in the studio as was the custom in the UK at the time (the 35mm THE AVENGERS and the action adventure shows from ITC like THE SAINT being a real exception) can be a bit slow at times and not all are good but there are some real gems there too and the cast lists are amazing. Beware of the US syndication versions which were horribly re-edited to pad them out for a longer time-slot. The title sequence should have the distinctive 'fish-eye lens' loons and last under 60 seconds - if it's longer than that it's the syndication version and you may as well switch it off! I wrote about the show in a bit more detail here: http://www.screenonline.org.uk/tv/id/1396589/index.html

I'll have to check to see if this YT video is the bloated US offer, or the original. It's an odd running time, either way...thanks for the pointers! (My brother still has a set of 12" laserdiscs and a player, as well.)(My cousin is the only person I know to have bought the insane RCA stylus video system, some thirty-plus years ago, now.)

Just checked the YT here, which does have a rather 'filmised' look which is not original to the show:

And it is the UK broadcast version - the 70-minute running time is more or less correct actually. In the UK at the time the slots were less rigid and many of the episodes are between 65 and 72 minutes for a 75 to 85 minute slot.

I quite enjoy the style myself but I completely understand why this might not be everyone's cup of tea :)