In 2006,  Earl Kemp decided to post the assorted contents of his original SaFari Annual amateur press association (APA) publication, essentially subtitled Who Killed Science Fiction?, under which title it won the 1961 Hugo award for best fanzine, despite most of the membership of even the relatively small 1961 WorldCon not having much of an opportunity to read the publication. Like most APA magazines (APAzines), it had been mostly distributed to fellow members of its APA, the Spectator Amateur Press Society or SAPS, one of the more impressive of the APAs in the sf/fantasy fan/convention/fanzine community.  Since this first anniversary issue of SaFari was also a report on answers to a brief survey to writers and fans, of essentially How and If SF Was Killed and, if so, how might that be rectified, copies were distributed to those who had answered the survey, as well. And, as Earl Kemp notes in his annotations from an aborted 1980 reprint and expansion, and presentation of the 1980, 1960 and more content (including comments from elsewhere about the publication) as part of Kemp's online fanzine eI, he wanted to win a Hugo for something. And so he did.

From Kemp's 1960 introduction:
For well over two years I had heard far too many people decrying the death of magazine science fiction, and like Bob Leman [later a notable writer of horror fiction], mourning the lack of critical soul-searching from within the field.

How shall I go about it? I determined first that I would restrict this critical colossus to the magazine field only and decided on five specific points of enquiry, which were:
1) Do you feel that magazine science fiction is dead?
2) Do you feel that any single person, action, incident, etc., is responsible for the present situation? If not, what is responsible?
3) What can we do to correct it?
4) Should we look to the original paperback as a point of salvation?
5) What additional remarks, pertinent to the study, would you like to contribute?

The responses to these questions, discretely and collectively depending on the answerer, were the heart of the eventual issue.

Why was there such a sense of a murdered science fiction in the air, that as many agreed with the premise behind the questions, even if only partially...and that so many editors in the magazine field responded? Well...relatively briefly: In the late 1940s, in the relatively flush years in the US after WW2 and increasingly flush years in science fiction circles particularly, the fiction magazines at the core of the fandom-engaged field were on an uptick in sales and quality, even as more and more sf was being published in book form and in the general-interest magazines of the era, such as The Saturday Evening Post and Collier's. The war and its aftermath didn't force a new sobriety nor maturity on popular culture as a whole, but certainly greater sophistication was suddenly likely to be appreciated, and the new technology sweeping into the culture and its implications for the future meshed with the desire in the sf magazines generally to achieve at least the kind of sophistication demonstrated by the crime-fiction magazines or the better western titles...and so they did. Thrilling Wonder Stories and particularly its younger stablemate Startling Stories moved away from the more juvenile aspects of pulp sf throughout the latter 1940s and began publishing such challenging work as "The Lovers" by Philip Jose Farmer and "What's It Like Out There?" by Edmond Hamilton; Astounding Science Fiction, though unfortunately allowing L. Ron Hubbard to gain his first wide exposure for Dianetics (among other "fringe science"--though Amazing also was a booster of UFOria and similar crackpottery), also continued to feature sophisticated, often engineer-friendly writing; Ziff-Davis's Amazing Stories and Fantastic Adventures, consistently the most juvenile of the more prominent pulps under editor Ray Palmer, were turned over to Howard Browne, who fitfully upgraded them with genuinely good stories mixed in with the usual pseudonymous notional adventure tales, while Palmer went on to found Other Worlds and Imagination, both also somewhat better than his work at ZD; founded in 1952, Browne's Fantastic was both more sophisticated than the other ZD fiction magazines and initially hugely successful. Planet Stories, the first great home of Ray Bradbury's sf as well as the space opera of the brilliant Leigh Brackett and many others, upgraded with the efforts of assistant editor Jerome Bixby and company; the legendary Weird Tales continued to offer good work, up till folding in 1954, and Donald Wollheim finally had a budget and publisher support with the Avon Fantasy Reader, founded 1947 and arguably a periodical book rather than a magazine per se, but still very much like a magazine, and a good one (the similar Avon Science Fiction Reader soon followed, and the two titles would be merged briefly after Wollheim left Avon for Ace). The Magazine of Fantasy, after several years of planning, finally launched as a similar companion to Ellery Queen's Mystery Magazine and American Mercury in 1949, and added "and Science Fiction" to its title with the second issue. Even as F&SF mixed in a number of reprinted stories in each issue, as did EQMM, the reprint magazines Famous Fantastic Mysteries and Fantastic Novels continued offering a few notable original stories, such as Robert Bloch's "The Man Who Collected Poe." Other new magazines started to pop up, some as impressive as Damon Knight's Worlds Beyond Science-Fantasy, featuring Jack Vance's The Dying Earth, and some as minor as the semi-professional Fantasy Book...which nonetheless managed to publish, in an issue with a short ghost story collaboration by Isaac Asimov and Frederik Pohl and a story from fellow future bestselling novelist Alfred Coppel, an item called "Scanners Live in Vain" by someone calling himself "Cordwainer Smith." A few pulp sf titles that had been suspended in the face of WW2 paper restrictions, such Super Science Stories and Future Fiction, were revived (and Future and its stablemates would feature some impressively innovative work on a tiny budget throughout the decade)...and an Italian publisher of romance comics, doing well in most of the rest of Europe, tried breaking into the US market, and to round out their portfolio let their advisor H. L. Gold try, among other things, an sf magazine called Galaxy...not exclusively devoted to satirical sf, but that was the way to play it, and an instant success, suddenly passing Amazing, Astounding and Startling to become the best-selling sf magazine, and one of the best-selling fiction magazines of any stripe. That simply, of course, accelerated the flood of imitations from other publishers, some not bad (Fantastic Universe, or the first magazine called Science Fiction Adventures--all of three of which have been not bad!), some terrible (Vortex Science Fiction, and the first issues of If, edited by Paul Fairman and resembling nothing so much as the dullest issues of the Ray Palmer Amazing, despite even a very minor Theodore Sturgeon story in the mix).

And all these magazines were paying, some very well for the time indeed. And even the low-paying "salvage markets" both needed copy and were there to offer extra income to sf writers who would have to simply toss multiply-rejected stories into a drawer or fireplace previously. It had been noted by several writers who worked in that period that one could, for the first time, make a career from writing sf (without being the author of a bestselling novel or several, such as Aldous Huxley, Philip Wylie or C. S. Lewis).

Meanwhile, as noted above, a number of publishers were starting or vastly expanding their sf book lines as the 1950s began; Ballantine Books particularly was willing to pay well for original work, and for serials and collections of shorter work from the magazines, and others (including Lion Books and Fawcett) would to one degree or another follow suit. 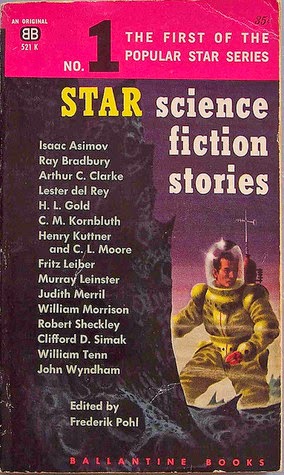 And while most of the sf films being made in the 1950s were pretty dire, a few weren't, and a few of those were even loosely or closely based on fiction from the magazines, including The Day the Earth Stood Still and The Thing (from Another World).  Television was even more unlikely to feature too much of adult interest, at least in the US, but there were odd exceptions (Richard Matheson had at least one story adapted for Studio 57 by the end of the decade, and, early on, several sf writers made some decent money scripting the kids' show Captain Video). More sophisticated was some of the dramatic anthology work on network radio in the early '50s, most notably Dimension X and its continuation X Minus 1, which mostly adapted sf stories from the magazines rather well and with professionalism.

And some writers and other creative people would look to sf, as Alfred Bester and others have noted, as a means for making coded statements about current events in the most repressed years of Sen. Joseph McCarthy's ranting and the clumsy inquests of the House Un-American Activities Committee. All this, and at least some critical attention being paid to sf from "outside" as well as "inside" the writers/fandom community all contributed to a sense of great optimism and some considerable artistic achievement by the mid 1950s...but also a contraction of the market, for various reasons, by the end of the 1950s, and the reasons are certainly discussed directly and indirectly in the Kemp compendium. Amusingly, some of the prime movers of the renaissance, to the degree that there has been (at least several partial ones over the decades) are among the contributors, or are multiply cited...Cele Goldsmith/Lalli at Ziff-Davis's Fantastic and Amazing, Avram Davidson, soon to become editor of F&SF, and Frederik Pohl at the Galaxy magazine group among the prime movers in the US, and Ted Carnell helping overcome the slump through his work in his UK magazines Science Fantasy and New Worlds (and, briefly, one of the Science Fiction Adventures mentioned above).

Seems to me I've seen that cover illi before but have not had the pleasure of reading any of the contents of this, though I have heard of it. Looking forward to the "more later" when and if.

It strikes me that When and If would make a good name for a blog.

Richard--the hot link in the first line of my text leads directly to the posting of the augmented WHO KILLED SF? Glad you're enticed...and, yes, not the worst blog title...

Wonderful and informing - thank you Todd - and I just love you referring to Hubbard's 'Diabetics' - made my afternoon - hope it wasn;t due to your slightly impaired typing skills, it'#s a beaut! :)

Thank you, Sergio, for all the benisons...but it was indeed a typo (possibly one driven by spell-correct that I didn't see till you pointed it out). Kate Bornstein referred to Diuretics similarly, I think it was...(Apple definitely spell-"corrected" KB's name the first time I tried this comment...)