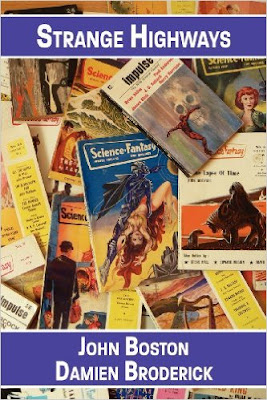 Science Fantasy was the primary British magazine devoted to fantasy, science fiction and the arguably hybrid form of science-fantasy at mid-century, the companion to the slightly longer-lived and more famous (and/or infamous) New Worlds, as well as to the short-lived Science Fiction Adventures magazine (one of a handful of magazines to have that title over the years, this one originally the UK edition of the second US magazine of that title). Strange Highways is John Boston's issue by issue run through the magazine and its fiction, editorials, critical writing, covers, illustration and design, and even its advertising, in a manner not altogether different if more exhaustive than my own adventures in magazine reviewing on this blog, and similar to those of Paul Fraser (among others) on his, as edited and occasionally expanded or footnoted by Damien Broderick. It's one of the smaller ironies of this labor of love, a casual rather than dryly academic look at the magazine's content, that it has been assembled by an American ("John Boston" is about as Yankee as a name can be without having "Knickerbocker" mixed in somehow) and an expatriate Australian living in Texas, but perhaps this isn't as improbable as it might seem (or no more so than the book itself, or its similar companion 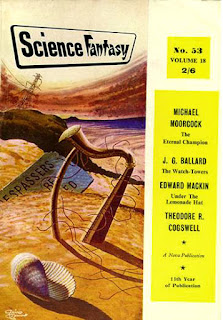 volumes on the years of New Worlds, and SF Adventures, before NW became a cause célèbre and a source of political harrumphing over its content while receiving Arts Council grants from the British government); Science Fantasy, despite no lack of mediocre and some worse fiction, was also the first home of the baroque fantasy fiction of Michael Moorcock (mostly published before he became New Worlds's editor), not a few of the key early stories by J. G. Ballard, Josephine Saxton and Brian Aldiss, and some fine adventure and historical fantasy by John Brunner and Thomas Burnett Swann, among a number of others, from all over the Anglophone world. Its editors included a number of the key figures among the editorial ranks of UK fantastic fiction: founding editor Walter Gillings had been a pioneer in professional sf magazine publishing in Great Britain, even if none of his projects were particularly financially hearty, and even this title was taken away from him for financial reasons by its publisher, so that New Worlds's E. J. "Ted" Carnell could serve as the sole magazine editor at cash-strapped Nova Publications; Carnell, the primary editor throughout most of its run; novelist and art collector Kyril Bonfiglioli, who took on apparently as few editorial duties as he possibly could after the magazines were sold to publishers Roberts and Vintner, who changed the format from digest-sized magazine to an often attractive paperback-book package; Keith Roberts, who was largely responsible, as art director as well, for that attractiveness; and Harry Harrison, briefly in from the US and back out on his way to live on the Continent again, with Roberts essentially stepping back in after his brief run...Harrison also one of the key American contributors to the magazine. 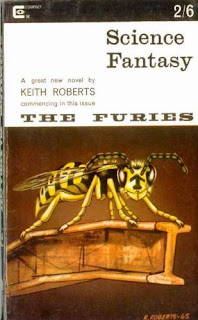 I'm surprised to find myself disagreeing strenuously with the assertion in Broderick's introduction that John Campbell's Unknown Fantasy Fiction magazine (1939-43) was the first great expression of science-fantasy fiction, given Campbell's famous predilection for "rationalized" fantasy, where rigorous rules were applied to the fantastic...when such predecessors as H. G. Wells (with his proviso that there be only "one miracle per story") and Thorne Smith had been adhering to similar notions rather prominently, and were models for much of what Campbell published in his magazine...which was, however, launched in part because Campbell wanted to be able to explore "fringe science" and paranoid philosophical points in fiction that might not so easily fit into his Astounding Science-Fiction magazine at that time...but that wasn't the only kind of fantasy Unknown published. Meanwhile, some of the most popular pulp fiction of the previous decades, such as the Mars and other stories of Edgar Rice Burroughs, as well as fantasies of lost civilizations and continents by writers such as Talbot Mundy and A. Conan Doyle, had already helped set some of the parameters of mixtures of sfnal speculation and fantasy coloration and romance; in the same year, 1939, Unknown was founded, such longer-lived magazines devoted in one degree or another to other flavors of science-fantasy, such as space opera and planetary romance stalwart Planet Stories, and frequent late-Burroughs (and imitators) market Fantastic Adventures, also made their debut. Such periodicals as Weird Tales and the various science fiction magazines had also published their share of science-fantasy, as had most of the adventure pulps, and such stories as F. Scott Fitzgerald's "The Diamond as Big as the Ritz" were in the same vein, often published by more affluent "slick" magazines and other markets (though the Fitzgerald was first published in the modestly-budgeted, influential The Smart Set, stablemate of the first issues of similarly influential crime-fiction pulp Black Mask). John Boston doesn't quite make any such sweeping claim, preferring to get on with the history and critique of the magazine itself, and, at obvious transition stages, listing some of the best fiction among that referred to so far...assessments that have allowed for three anthologies from Boston and Broderick so far, published by Surinam Turtle Press. This volume, while perhaps best not read straight through in one or three sittings unless one is deeply intrigued by the magazine and its time and place, is conveniently broken down into the several-issue essays in which it was originally published, as contributions to the FictionMags discussion list. While the anthologies might make for more engaging reading for general audiences, those who are vitally interested in the literature or even popular culture of the time, at very least, should find this volume (and its companions) valuable and amusing. 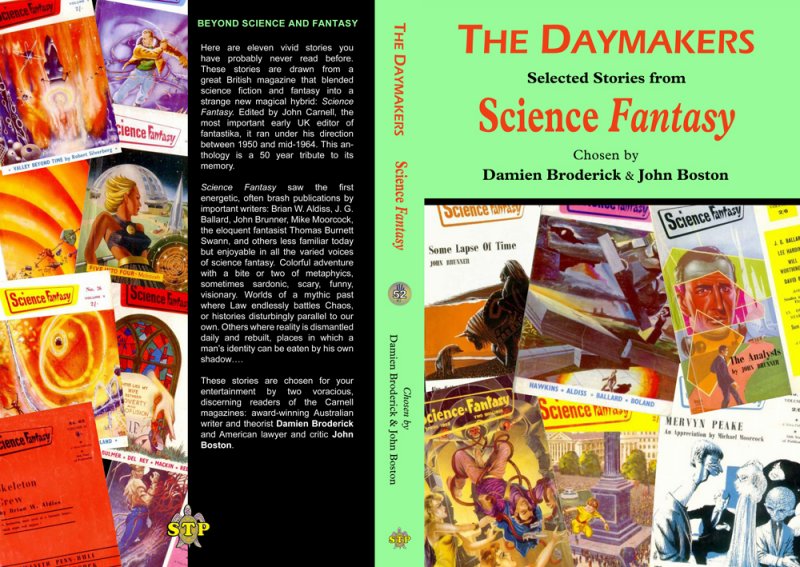 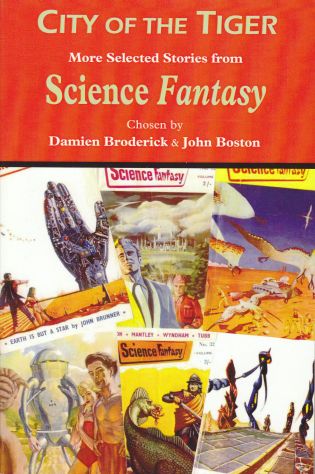 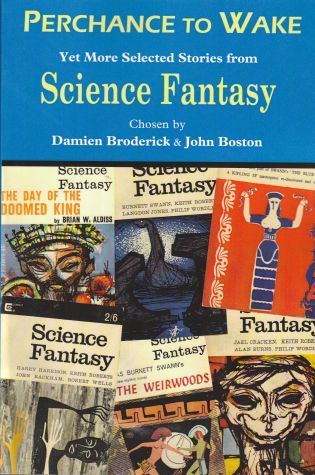 John Rackham, Bring Back a Life

Brian Aldiss, The Circulation of the Blood

J.G. Ballard, You and Me and the Continuum

I've had this book tempting me for awhile. I'll have to track down a copy. Nice review!

Thanks, George. You are damned near the perfect reader for it.

Todd – Thanks for this post. You referenced a lot of names I need to read.

Not an area I know but I always find books like this really enjoyable to dip in and out of, no matter how great my ignorance (in the hope, of course, that said ignorance might diminish by the end). Thanks for the terrific intro!

Elgin--and there are not a few others who are less well-remembered.

Sergio--you might even want to start with one of the anthologies (you, too, Elgin)...

I have all these books and they are valuable additions to my sets of NEW WORLDS and SCEINCE FANTASY. I wish we had more books like these covering some of the other great SF magazines. A tremendous job by John Boston and of course Damien Broderick.