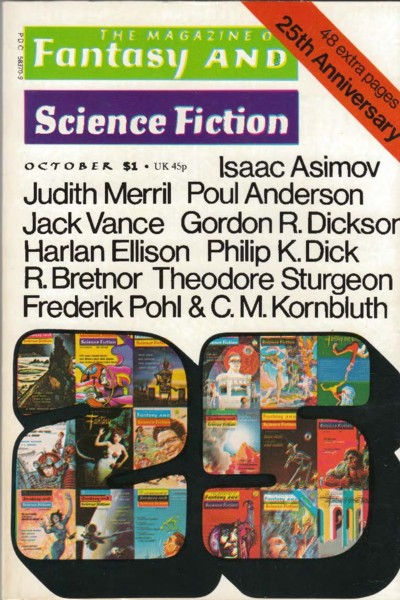 Aside from being magazines which shared the same rack spaces for almost three decades, and being the primary "openly" mixed fantasy and sf markets for short fiction in the US during most of those years (and with not a little interplay between their editorial staffs...for example, Ted White had served as assistant editor with Ed Ferman and Ferman's predecessor Avram Davidson at F&SF in the 1960s; White's Fantastic predecessor Barry Malzberg would co-edit with Ferman three impressive anthologies of new fiction, including the famously-tampered-with, by the publisher's editor in its first edition, Final Stage), one of the more obvious differences between The Magazine of Fantasy and Science Fiction and Fantastic Stories was in how they treated their anniversaries... F&SF was careful to note every anniversary with a special issue of one sort or another, while Fantastic all but resolutely ignored their anniversaries, at least officially (while Fantastic's older stablemate Amazing, perhaps because it was the first and oldest no-bones-about-it sf magazine in the world, was careful to mark at least the five-year increments with some sort of note). Even given the banner across the top of this issue of Fantastic, no mention is made anywhere in the issue that this marks 25 years of publication...but it did. 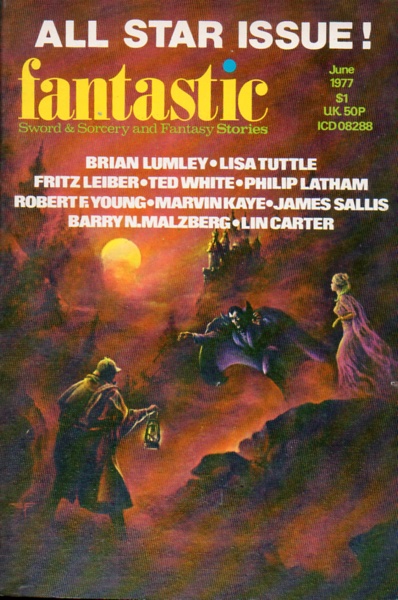 And it's somewhat telling to compare the lineups between the two issues...even given there was no official "special" status given to the Fantastic, the contributors are a not-atypical mix of relative up-and-comers (James Sallis, Lisa Tuttle, Brian Lumley), established writers as well-known for their work at Fantastic and Amazing as anything else (Ted White, Robert F. Young), notable veterans with long relations with the magazine (Barry Malzberg, Lin Carter), and rather older veterans making some relatively rare appearances in the magazine (Marvin Kaye, Robert S. Richardson as "Philip Latham")...and the legend, columnist Fritz Leiber. While the F&SF issue is filled with veteran writers, most at least verging on legendary status, and having long, close associations with the magazine; Gordon R. Dickson perhaps the least so...and perhaps more indulgence given to allow for the old friends to stop in, such as running an Asimov "Black Widowers" story with the weak justification that J. R. R. Tolkien was key to the unfantasticated mystery involved, and a prose-poem vignette by Judith Merril (given both magazines' reputation for fostering the work of women writers, if even more so under respective earlier editors Anthony Boucher and Cele Goldsmith Lalli, interesting how they here have one woman contributor each).

R. Bretnor's Papa Schimmelhorn story was the first in F&SF since the early 1950s, and only the second published since then, and as such, it's relatively easy to take, not quite as imbued with the clumsy "good-natured" "satirical" misogyny as the next two stories published in the sequence...the apparently irresistible aging, married lecher was still somewhat improbably magnetic to young women, while essentially spurning those of his own age (whether Bretnor suffered from Hefner Syndrome himself is a good question, particularly given the blatant attitudes toward women in the next two stories). However, Bretnor's extension of the basic schtick of Henry Kuttner's "Gallagher" stories, only with Schimmelhorn not so much needing to be drunk to invent as to allow his subconscious to take over to create the magic-science, is still capable to inspiring some humorous incidents, in this story set primarily in the time of Genghis Khan's conquering of most of the world known to him.

Also set in (albeit earlier) medieval times is probably the best-remembered story in the F&SF, the "posthumous collaboration" where Frederik Pohl completed a fragment from the papers of his old friend and writing partner C. M. Kornbluth, who'd died young in the late '50s...a story about a man with no sort of formal education, and of course before literacy was easily available to the peasantry, thinking in terms that anticipate science fiction and related speculation, but utterly unable to record them, or even share them with anyone who'd begin to understand...a story with built-in appeal to sf readers particularly back before social media could keep almost anyone from being less virtually lonely, at very least.

Jack Vance's "The Seventeen Virgins" was incorporated much later into the novel Cugel's Saga, the second Cugel novel and the third in the Dying Earth sequence of somewhat episodic novels, "fixed up" from linked short stories that were in part published separately before each novel was presented to the public. The Ellison story is probably the next-best-remembered story in the book, one of the more intensely personally ones he was writing in the '70s; the Dick story one of those collected in his last great selection of short fiction published during his lifetime, The Golden Man. The F&SF has no book review column for this issue, but the regular film (Baird Searles) and popular science (Asimov) columns, and Gahan Wilson's cartoon, are joined by a relatively rare editorial from Ferman.

In the Fantastic, the lead-off novella is the second of Marvin Kaye's "Incredible Umbrella" stories about the not quite hapless J. Adrian Fillmore, who with the magical bumbershoot finds himself passing through  various fictional "universes," often rather charmingly mixing characters from the likes of Dracula and the Sherlock Holmes stories. Modeled in part on the somewhat similar fantasies about Harold Shea by Fletcher Pratt and L. Sprague de Camp, they are a bit less subtle than their model at its best, but, like the Bretnor, the short novel makes for a reasonably diverting read. De Camp himself is profiled in this issue, in a pendant to the series of profiles of fantasy writers he himself had been contributing to Fantastic beginning in 1971, leading to, among other things, his somewhat controversial biographical and critical writing about H. P. Lovecraft and Robert E. Howard. Instead of the usual terrible Carter sword and sorcery story in the issue, Brian Lumley's brief, unreprinted series has its second entry; much more promising were the relatively early stories by Lisa Tuttle and James Sallis, and the well-populated if somewhat brief reviews by Fritz Leiber, often dealing with Lovecraftiana in one way or another (Leiber being one of the last as well as one of the most important writers to join the correspondents in the "Lovecraft Circle"); Ramsey Campbell was one of the great "discoveries" of Lovecraft's great acolyte, and publisher, August Derleth, and Frights one of the most important of the early all-original horror fiction anthologies from a non-specialty press in the US.
For today's books, and perhaps some more magazines and other sorts of literature, please see Patti Abbott's blog.

The oddly early 24th annish of Fantastic and the regularly scheduled F&SF  24th might've been Even Better, even given the unimpressive covers... 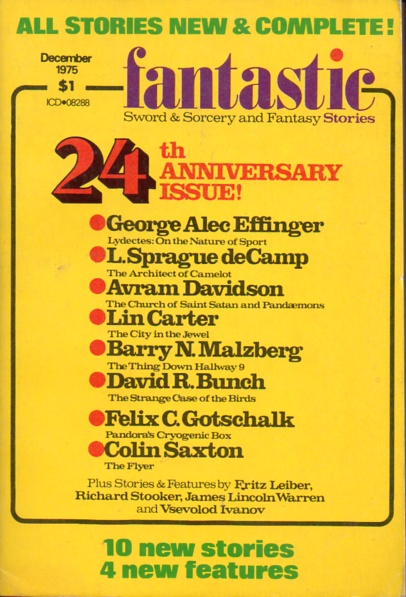 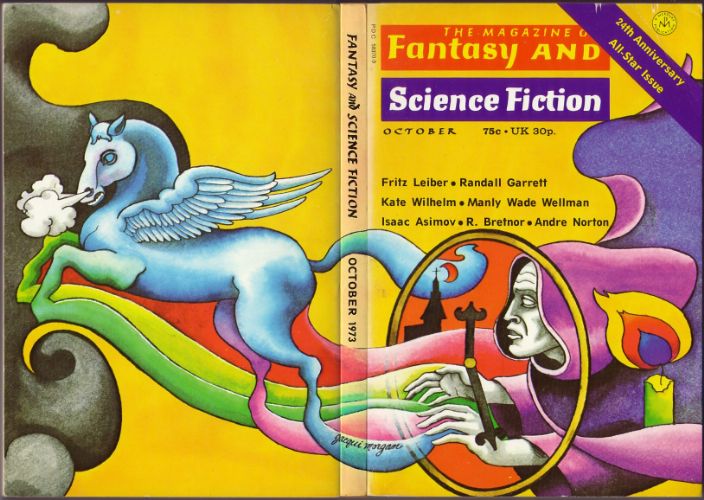 I was a big fan of FANTASTIC during the Sixties. But THE MAGAZINE OF FANTASTY & SF consistently published quality stories over the decades. And the Ed Ferman anthologies were top-notch.

FANTASTIC in the 1970s and '60s as well was always a mixed bag (as was F&SF), though both published a very impressive amount of excellent and good fiction, and no little brilliant. Cele Goldsmith Lalli and Ted White were pretty much on par as editors, I'd suggest, with White's lack of publisher support even more profound than Goldsmith Lalli's..."Ross"/Wrocz, Harrison and Malzberg between them, and Mavor after White, did what they could, and also managed to publish some impressive work. The librarian reference THE GUIDE TO PERIODICAL LITERATURE gave FANTASTIC a rave review ca. 1976, along with similar for F&SF...but everyone expected good things from F&SF (Gregory Feeley touches on this on FaceBook today). White's AMAZING got a more measured review, which I think (and I think White thought and thinks) is fair...AMAZING had rather more newsstand competition for sf stories than FANTASTIC did for fantasy stories, for most of their run. And FANTASTIC founding editor Howard Browne certainly hadn't been averse to publishing good fiction, nor was Paul Fairman, when they cared at all (and Fairman apparently let Goldsmith find what good stories she could in the slushpile as his assistant, such as Kate Wilhelm's first published story, and shoo them in among the pre-purchased yard-goods he had bought from his stable of good writers producing some good and mostly indifferent work on regular schedule).

Fairman's stable was famously Robert Silverberg, Harlan Ellison, Milton Lesser before he legally changed his name to Stephen Marlowe, and Randall Garrett, with Henry Slesar coming in big toward the end of Fairman's short term at Ziff-Davis...after a couple of years (of mostly writing his own fiction for other markets on ZD company time), he moved on to become the managing editor of ELLERY QUEEN'S MYSTERY MAGAZINE for a brief run, at BG Davis's new company, where fiction magazines still mattered...while the brilliant group who provided the bulk of AMAZING and FANTASTIC's fiction during Fairman's tenure knew they were to get it in Thursday, rather than worry too much about it being good. If it was good, fine...but mostly it should Not Cause Problems by being too challenging in any way, and should be readable...not that Fairman actually bothered to read it before turning it over for typesetting...

George's comments are spot-on. F&SF has been a consistent bright light in the field despite the obvious editorial changes over the years and FANTASTIC during the Lalli/White years was a publication I looked forward to every month.

Despite the misogyny, I have a far more positive reaction to the Papa Schimmelhorn stories than you. Different stroke, I guess.

All of them, Jerry? I didn't read the first, which was pretty good, for some years after coming across the rather weak "Papa Schimmelhorn's Yang" in a new 1978 issue and the virulently awful "The Ladies of Beetlegoose Nine" in a 1976 back issue I read early on and hope to re-examine soon...this one surprised me in the degree to which it indulged only a smidgen of actua hostility to women in comparison. I'll see what I make of "Ladies" now...

And, hey...George doesn't speak up for the White version...which, alas, was a bimonthly, then a quarterly in his term...ZD didn't give Goldsmith Lalli much more budget than Sol Cohen gave White, but at least they paid her a salary (versus what amounted to a stipend) and issued her magazines monthly...

The most remarkable thing about F&SF is how little the basic approach...to seek fiction in decent prose and attention to character as much as the story will allow, while still being (usually) fantastic...has changed from editor to editor.

Still good in the '80s...though Budrys's book columns were better in the '70s...eventual '80s editor Kristine Rusch is my least favored of F&SF editors, but her issues were still usually good, and she did seem to seek out or accept more horror fiction than Ferman had, so I had no problem with that.