Friday's (Not) Forgotten Books: Wise & Fraser: GREAT TALES OF TERROR AND THE SUPERNATURAL (1943); Healy & McComas: ADVENTURES IN TIME AND SPACE (1946) 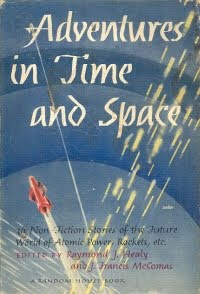 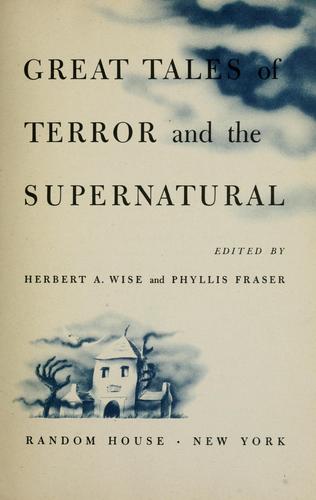 contents, courtesy of British Horror Anthology Hell...I don't believe the UK edition was different in content from the US original. See also this ISFDB page for a partial accounting, at least, of original publication sources.

Great Tales of Terror & the Supernatural edited by Herbert A. Wise & Phyllis Fraser 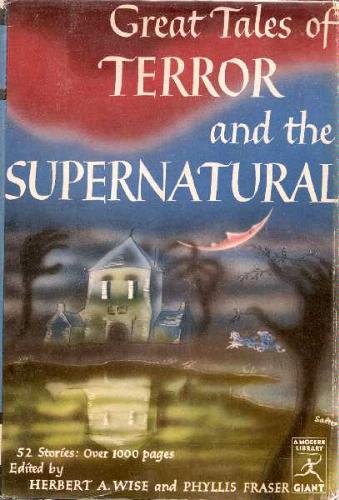 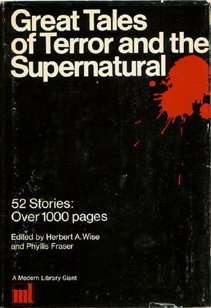 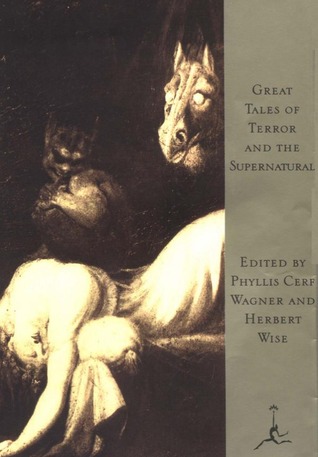 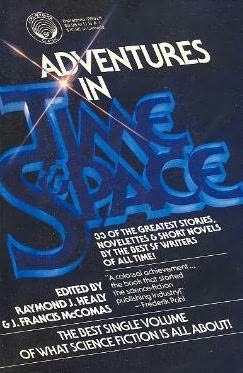 So, here are two anthologies Random House offered during the '40s, which helped establish canons in their respective fields, in part because both anthologies were kept in print consistently as part of the Modern Library or other Random House extensions. 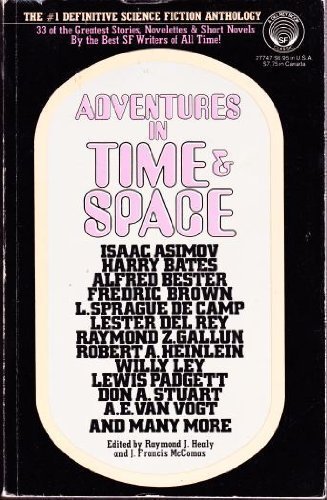 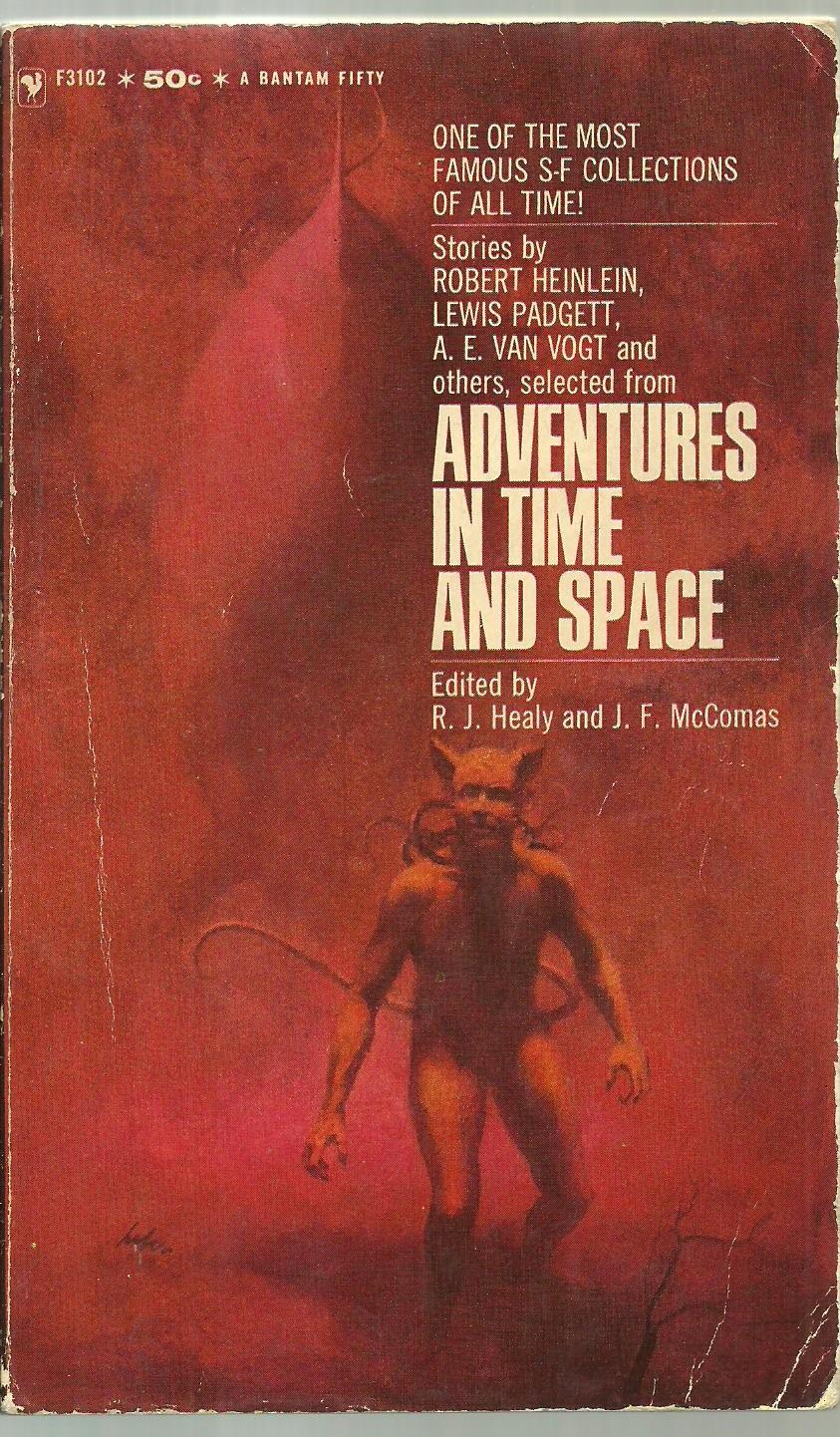 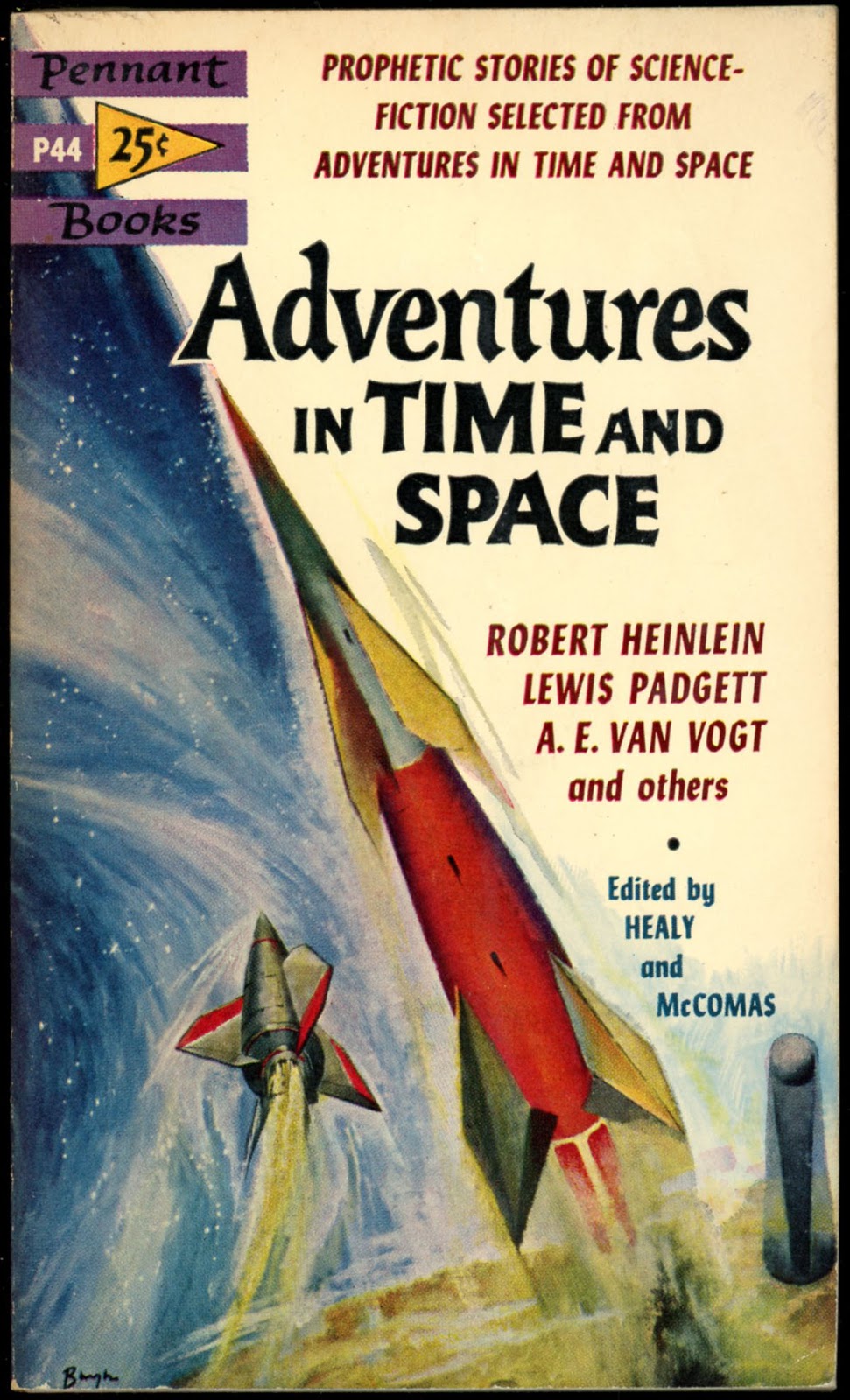 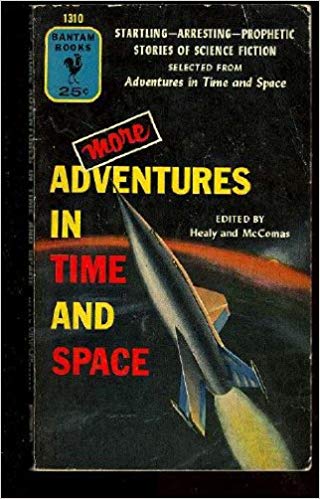 As I've been checking through a number of the major anthologies of suspense fiction over the decades, I didn’t till being reminded of it the other day recall how much of the Fraser & Wise volume is devoted to non-supernatural tales of menace, mostly though not entirely in the “Tales of Terror” grouping. It’s remarkable how many of these have become chestnuts…essentially all of them…and I have to wonder how many were already common coin in anthologies by the time this one was first issued in 1943. However, along with August Derleth and Donald Wandrei’s efforts at Arkham House, this book was probably the first great exposure H. P. Lovecraft received (along with some early paperbacks), as far as the larger reading public is concerned, and was almost certainly the first time Lovecraft and Hemingway were anthologized together (though Dashiell Hammett came close with his horror anthology Creeps by Night [1931]). Also notable, at least in the latter-day British TOC offered here, is the “outing” of Karen Blixen rather than credit of her story to her pseudonym, Isak Dinesen. Even by the time I read this anthology, in a library-sale copy of a 1970s Modern Library edition (with the tamest cover it would get, I suspect), most of the stories were familiar from other anthologies, but not all…to carry another W. W. Jacobs story, aside from “The Monkey’s Paw,” is a small gift in and of itself. Happily, the Modern Library still has this one in print, in the US.

The Healy & McComas wasn’t the first sf anthology from a major publisher in the US, what with Donald Wollheim’s and, just barely, Groff Conklin’s efforts preceding it, along with such mixed selections as Philip Strong’s, but Adventures was one of the most prominent and widely influential, again not least because Random House and eventually the Modern Library imprint were behind it, and Ballantine when purchased by the RH folks did paperback editions with overblown blurbs. As the annotated TOC suggests, John W. Campbell’s Astounding Science Fiction was almost ridiculously overrepresented, even given how much good material it had published and how important that magazine under that editor had been in the development of magazine sf in the late 1930s and ‘40s…however, one (1) story each from Planet Stories and Amazing and none from any other magazine (the Unknown essay reprint was the kind of borderline crackpottery that Campbell would pollute Astounding with in the 1950s onward, rather than a story, and very out of place here), and only one entry not from the magazines, don’t make this a particularly representative anthology of the time…and the absence of Theodore Sturgeon, Leigh Brackett, Hal Clement, Clifford Simak, and C. L. Moore (except to the extent that she had input on “The Twonky”) are all telling (and most might wonder where’s the Bradbury?), in a book that makes room for the Phillips article. But, nevertheless, as with Lovecraft in the other volume, this was among the first exposure many of these writers and much of this fiction had for the larger reading public, and much of it holds up well. Unfortunately, this volume hasn’t been reprinted in its Modern Library edition since the ‘80s. 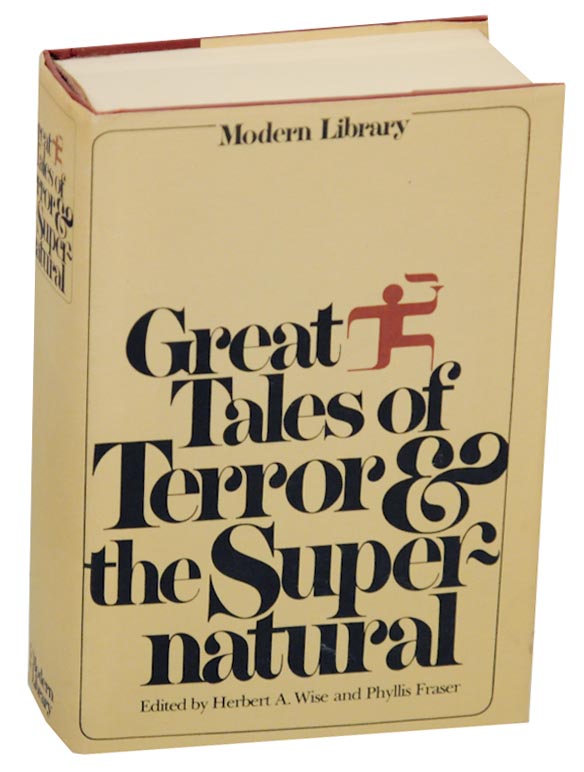 For more of today's selections, please see Patti Abbott's blog. Bill Crider's FFB item this week, in honor of Bouchercon in part, is a memorial volume edited by J. Francis McComas's widow Annette Peltz McComas, collecting from and documenting the birth of McComas's most lasting legacy, co-founding The Magazine of Fantasy and Science Fiction with Anthony Boucher...a very good book all but orphaned by its publisher at birth. 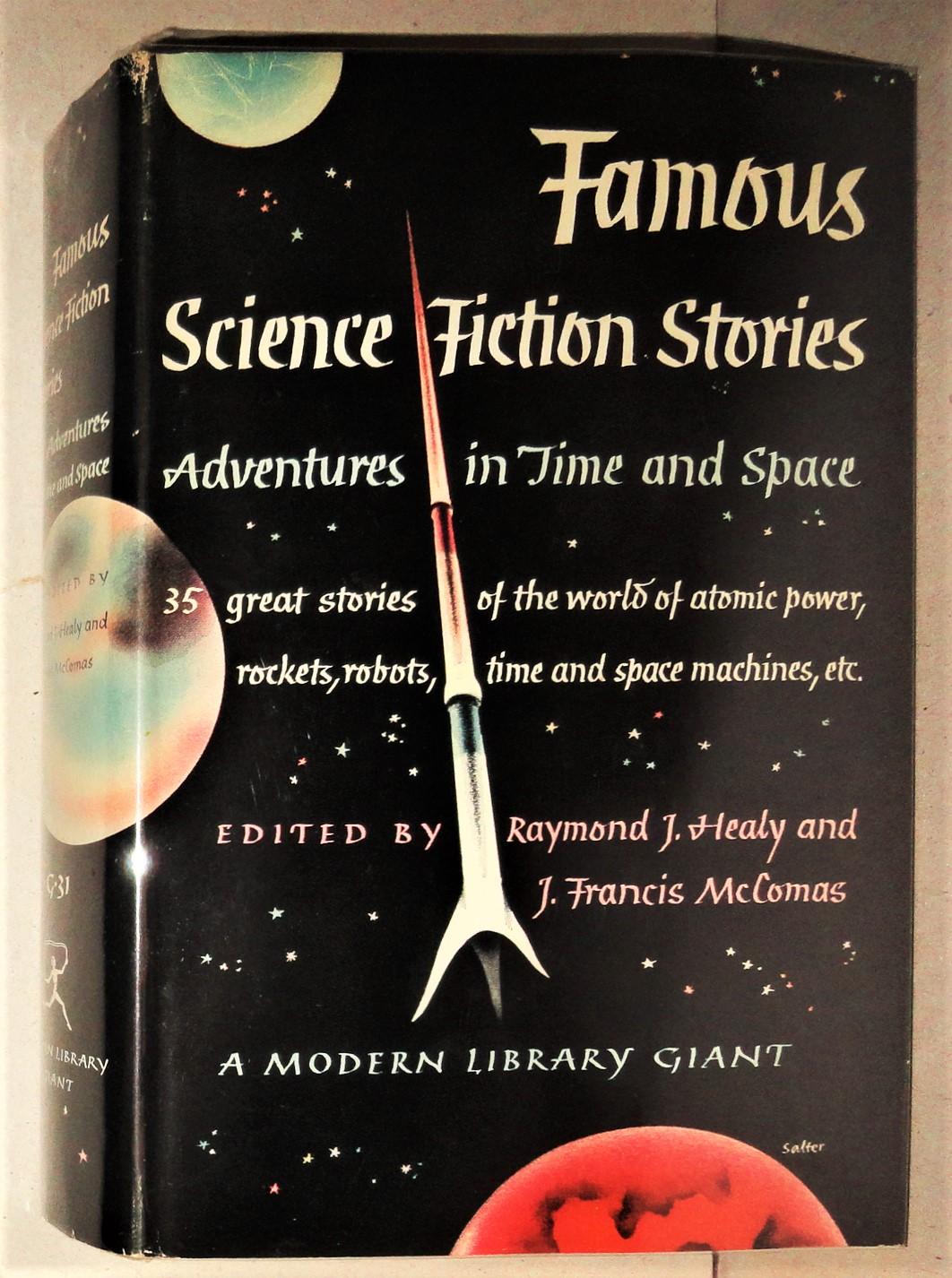 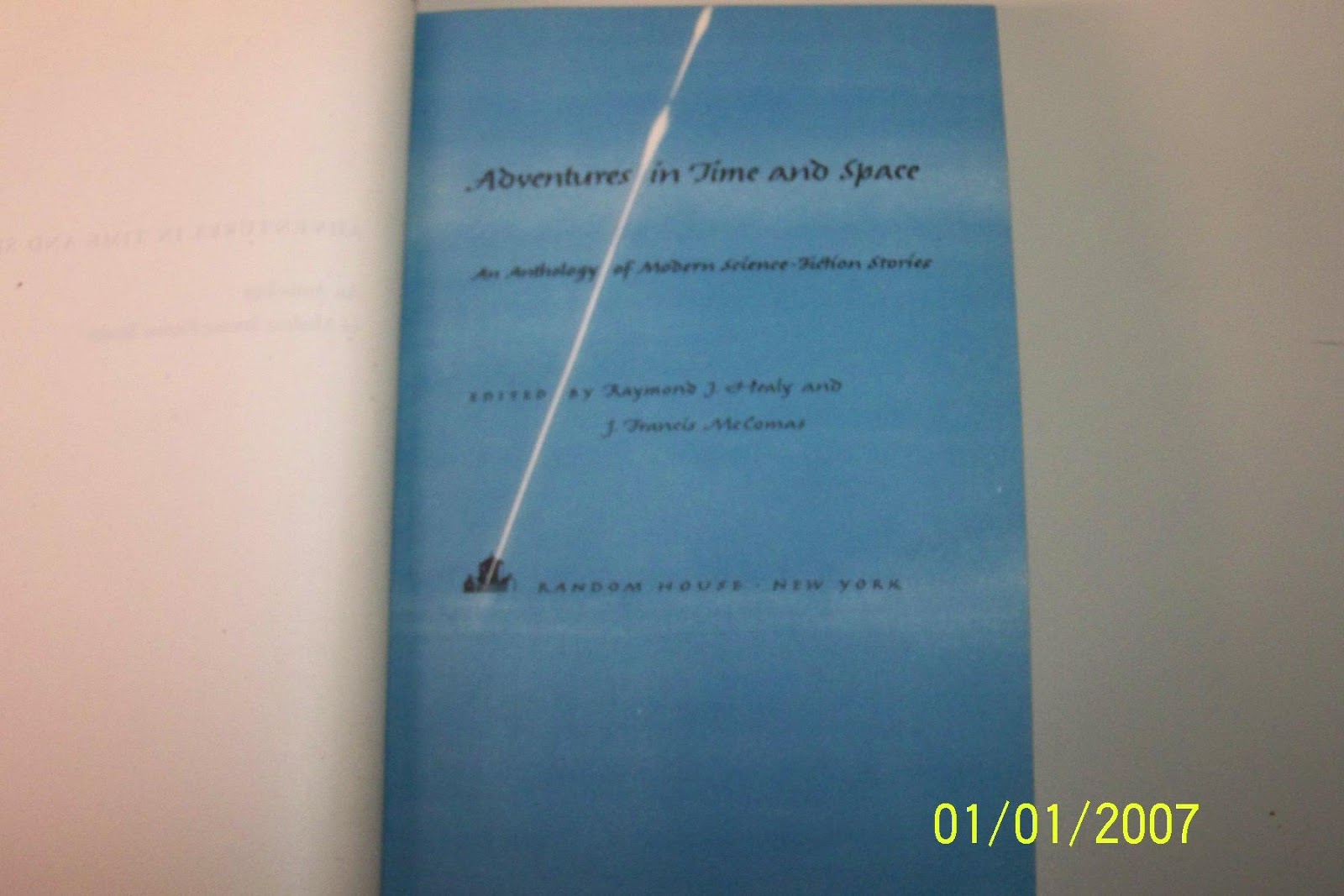 ADVENTURES IN TIME AND SPACE was the first SF anthology I'd read as a kid. After that, I was hooked!

When did your store flourish, Scott? Those that bridge fantastic and crime fiction often have some interesting nomenclature...DC's Moonstone Bookcellars was the first I was able to patronize regularly...

Oddly, George, one of the first I found on my own, not on my parents shelves, was Donald Wollheim's THE POCKET BOOK OF SCIENCE FICTION, which was probably the first "pure" sf antho from a non-specialist publisher...

I just bought one of these sorts of books at a book sale at my library. Too lazy to go downstairs to get the title. But something about classics of horror.

Well, as long as it's not a John Canning collection of "true ghost stories" rubbish (a common blight on my early library browsing, and remarkably viable as commercial ripoffs), you might be in good shape there. Though I'll be curious to know what it is when you pick it up again...

It's interesting how much canon gets shaped by fiat of publishing. If no one can get hold of Blake, he falls out of the public consciousness. I was intrigued by the decisions for inclusion in the Oxford big book of Gothic (oh,I know that's not the name) and made its introduction and definition of "Gothic" our interrogatory question for the semester when I was teaching that theme.

I'll have to take a look at that. Editorial fiat, the book's editor or editors overruled by the publisher's editor(s), the willingness of the publishers to keep the work in print (as you expand on my point...the Modern Library editions helped make both of these much more influential over decades than they might be otherwise...though I find it amusing and odd that I can't find images of the typography-only covers both sported in their 1970s ML editions).

Phil Stephensen-Payne, who hosts William Contento's online indices and does a few of his own, did this one for the Baldick:

--that IS a very eclectic approach to Gothicity...

Some editors go with the "big tent" theory of inclusion, Todd. They bring in as many stories with as many themes as possible to appeal to the largest audience. That Gothic collection is a good example of how wide the editor cast his net.

I strongly suspect that, as with Judith Merril in her more personal anthologies, he was trying to make several points, as well...hence Kate's finding it a useful challenge to her students.

Certainly Bradford Morrow has similarly been bruiting "the New Gothic" for some years...including in his magazine CONJUNCTIONS and the anthology by that name...rather like Jerome Charyn's "the New Mystery"...and various -punk movements, and their "adversaries"...all fun with a purpose, as HIGHLIGHTS magazine use to put it, and probably still does...

Todd - The store last about 7 years from 1997 or 1998 (I can never remember) until 2004 or 2005. Since I was an absentee co-owner I was not intimately involved in the day to day stuff. My primary functions were to work conventions and to find rare-ish books for resale in the shop. I think we were one of the best of our type of books and had many great writers in for signings and the like. Gone but not forgotten.

That does sound good. Sorry you had to close.

I have ADVENTURES IN TIME AND SPACE, the original edition, and though I haven't had it off the shelf in decades, I think of it as it's a fine anthology.

I agree. Just a bit too invested in ASTOUNDING, and not quite as representative of ASF or its best as it could be...it is good that it pulls a Ross Rocklynne story, among some other interesting choices.