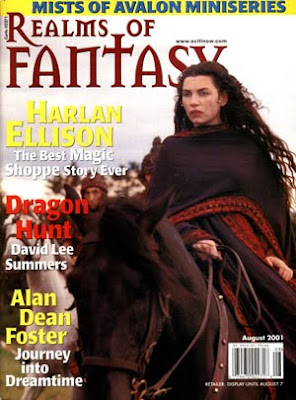 Realms of Fantasy, the second-most-popular of fantasy-fiction magazines in English over the last sixteen years, has been folded after a year's run as the product of Warren Lapine's Tir Na Nog Press, after fifteen years as a Sovereign Media publication, the staff announced today. It's up for sale for those who might want to take it on. (Lapine also incorrectly groups the still-extant Weird Tales in among the dead magazines he used to publish, but he's also shuttering his wife's romantic/horror-fiction magazine Dreams of Decadence.)

As its only editor, Shawna McCarthy, notes in part in her farewell message:

Back in 1993 (I think—it was so long ago), I wrote a letter to Carl Gnam, publisher of Science Fiction Age. I pointed out to him that fantasy outsold SF by a factor of three to one, and that he should really consider starting a sister fantasy magazine for SFA. I, of course, volunteered to helm it for him. I’d been missing my days at Asimov’s pretty much since the day I left, and I was eager to edit short fiction again. After several meetings, and dummy issues and draft direct mail letters, we finally launched Realms of Fantasy. Not the most inventive title, but as I’ve always said, I’m not great with titles, and I figured the more straightforward, the better. (The workers at my local Post Office were certain that it was an entirely different kind of fantasy magazine, but never mind that….)

(Oddly enough, I called Gnam, local in the DC area, to pitch him another magazine idea not too long after the founding of ROF...he assumed I was a creditor when he called back, which I took as a less than hopeful sign.)

It's a pity, given that Realms has always been at least a good magazine, and the longest sustained presence on the newsstands since the folding of Fantastic in 1980 of a magazine, along with The Magazine of Fantasy and Science Fiction,, making no bones about being a fantasy-fiction magazine. It had its share, and more, of awful covers (Gnam's magazines were given to them, these being among the better covers, particularly among the media-driven ones, but having Julianna Margulies on your cover makes actual ugliness difficult), but with often excellent portfolios of fantasy art within (Karen Haber did an excellent job of annotating and presumably organizing these over most of the magazine's run). A loss, and while I hope someone takes Lapine up on his offer to sell the magazine for a buck to anyone who wished to continue it, I'm not hopeful. 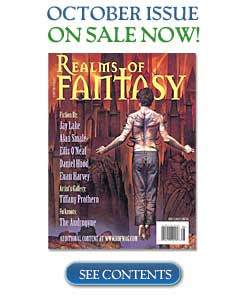 The last issue likely to be seen on newsstands, the current October 2010 issue...a PDF of the December issue's contents has been promised to subscribers.
Posted by Todd Mason at 10/18/2010 01:53:00 PM

Email ThisBlogThis!Share to TwitterShare to FacebookShare to Pinterest
Labels: Realms of Fantasy

Ugly covers are a killer that keep people away, though I wonder how many fantasy readers just spend their moola on books instead. However, if there were a mag that actually represented the kind of fantasy that people buy and reviewed same, I think it might do well enough. I'm no mogul so I'm likely wrong, but I never felt much of a desire to buy it -- and they certainly never published me. No, not my sole criteria for buying a magazine -- in fact it usually goes the other way. Wow, I say as I devour a magazine, I really want to appear in the pages of this one. I say that about very few now. There is just too much competition.

Sadly, most of the ugly covers weren't too different from conteporary ugly paperback and hardcover covers. REALMS was never as adventurous as FANTASTIC at the latter's best, but also never published anything as bad as, say, Lin Carter's Conan pastiches, as FANTASTIC did during Ted White's decade. It was a solid magazine, but not as exciting as it might've been. I should note that the illustrations for the stories were usually also excellent...only the covers were eyesores. I don't think that that was the best commercial decision at any level.

Today, none of the fiction magazines is published by a well-financed publisher with a lot of magazine marketing experience, including Penny Press with the former Dell group. So, as circulations tend to levitate between five and thirty-thousand copies sold, among all the best-selling titles, with the likes of TIN HOUSE and THE PARIS REVIEW and ZOETROPE ALL-STORY being within shouting distance of EQMM, ANALOG and F&SF in sales...F&SF in the '70s could reliably sell about 60K, ANALOG about 80-100K (being published as it was by Conde Nast didn't hurt, even if it was their lowest-circulation item by some distance), and EQMM was somewhere north of 100K...in part because Davis Publications were both experienced fiction-magazine publishers of middling size, and in part because EQMM still had a serious carryover from more fiction-magazine-friendly decades (as ANALOG did and does).