Some quick takes this week, but nonetheless some important books, the first one at least to me. 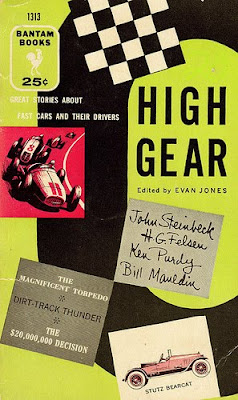 High Gear was the first anthology of sports fiction I read, as a kid; my father was a (mostly) amateur auto-racing driver (mostly sports cars, both track and auto-cross racing--the latter long-term road-racing, sometimes with my mother as navigator) in Alaska in the early and mid 1960s, and the Bantam Pathfinder edition of this anthology presumably caught his eye at the racks or someone else's eye who thought it would be a good gift. Certainly it was to me...it was my first encounter with the fiction of William Campbell Gault, William F. Nolan, John D. MacDonald, William Saroyan (beating out first exposure to My Name is Aram by a year or two), war-correspondent legend Bill Mauldin and some guy named Steinbeck; it wasn't my first experience with Thurber, but close, as well as with such sports-fiction specialists (along with Gault) as Ken Purdy and Henry Gregor Felsen. I don't know anything about this Evan Jones (there seem to be, possibly, several active in the literary world in the last century) except that he also seems to have edited some western and otherwise frontier-oriented anthologies...and that he had excellent taste as an editor here.

A rather blurry image of the Pathfinder reprint edition my father had, which he's given to me.

What's notable to me in this anthology, with its stories chosen by polling the members of the Western Writers of America, with a simplified Australian ballot (essentially, please name your choice for best western short story ever, and your four or so [more if you like] other suggestions for the anthology) is in who isn't in the book...such younger writers as Joe Lansdale and Loren Estleman were still establishing themselves in 1983-84, but the absence of the Els--Elmer Kelton and Elmore Leonard--seems a bit odd, though perhaps their stars have risen among their peers in the last quarter-century. (Old favorite of mine Shirley/Lee Hoffman barely wrote any short fiction in the western field, pretty much going straight into the novels with The Valdez Horses and her first-novel Spur; rather comparable to Samuel Delany's entry into the sf scene.) Also, and even more surprising to me, is that not a damned one of these stories was first published in a western-fiction magazine, pulp, digest or otherwise, though the "Clay Fisher" story was apparently first published in the "1962 Doubleday WWA anthology," as the Spur Awards page on the WWA site puts it (not bothering to name the anthology!--though Pronzini and Greenberg fail to do so, as well, in the copyrights detail page). I've just received this book, so haven't yet had the opportunity to go through it...though it does look inviting, save the Zane Grey story (which, I'm amused to note, was first published in The Ladies Home Journal...given the machismic anxiety of some western readers, I'm sure that datum wouldn't help, but of course Grey, in the manner of Stephen King, wrote badly enough on a regular basis to transcend the usual audiences for his kind of fiction at the time...and perhaps, as I occasionally am with King, I'll be pleasantly surprised by this novella). 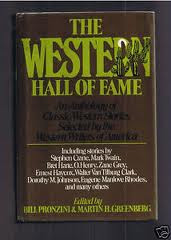 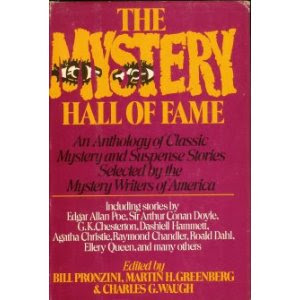 Now, this selection seems less surprising, though to find Kemelman muscling past the likes of Ross Macdonald, or John D. McD for that matter, seems not so much a gross injustice as a product of the time of the polling. However, as wonderful a story as W. W. Jacobs's "The Monkey's Paw" is, it has essentially no business being in this book...as opposed to the Silverberg and Greenberg The Horror Hall of Fame. The Pronzini was polled in, and published here over Pronzini's objection (a jusst case of modesty overruled). There is perhaps one too many classic stories here of murder and eating the evidence, but the gimmick was pretty irresistible, and the stories are indeed classics (though John Collier's "A Touch of Nutmeg Makes It" might still be the most insidious of this class among the early stars). (Also notable to me is the number of typos in some WorldCat listings...fixed above...) Another recent purchase (simultaneous, actually), but I've read more of the selections above before, and don't actively dislike the work of any of the writers collected here, so expect to have a more familiar good time going through this one.

And, a late bulletin: it seems that, even as Robert Silverberg has edited or co-edited two poll-driven Fantasy Hall of Fame volumes, that Dale Walker (again with the WWA polled? Yes, as it turns out) produced a 1997 Western Hall of Fame (index from Contento): 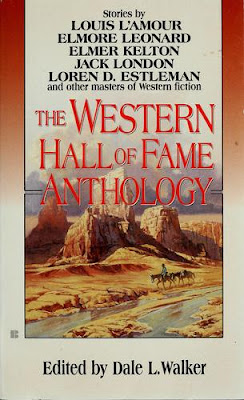 --that certainly redresses some of the slights of the first set...while adding some more! At least this one (and the second Silverberg) could've been, as the SFWA sf HOF volumes were, tagged Volume 2...

...and, for the hell of it, here's the comparison of the two Fantasy Hall of Fames, the first from a World Fantasy Convention attendees poll, the second from a SFWA poll a decade and a half later:

Two covers that leave much to be desired...the newer book's being a bit less dire... 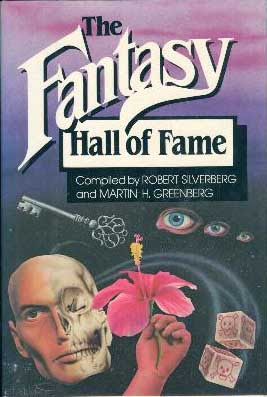 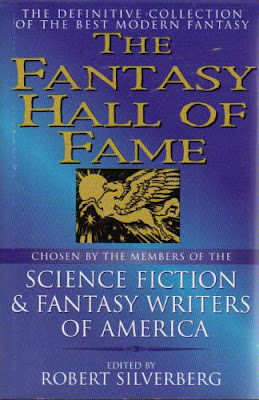 Reading about The Western Hall of Fame reminded me that when I was a teenager and even later, I read westerns very enthusiastically.

I remember Zane Grey and Walter van Tilburg Clark, though I don't remember the actual stories. Just that I read and enjoyed them. I also read O Henry - mostly in school, but do remember one particular story of his. Not a western.

By the way where is Louis L'Amour's name?

I have an anthology of Elmore Leonard's Western Novels which I've been meaning to read. It's here, on the TBR pile.

I was wondering if MY ANTONIA or RAMONA might be considered western novels...What do you think Todd?

Well, Clark was a vastly better writer than Grey, and you might remember THE OX-BOW INCIDENT or THE TRACK OF THE CAT or "The Portable Phonograph" from Clark, or RIDERS OF THE PURPLE WAGE from Gray (ZANE GREY'S WESTERN MAGAZINE, aside from the Grey reprints!, was one of the best western fiction magazines we've had, a Dell digest in the latter '40s and '50s, briefly revived by Leo Margulies in the early '70s but despite early work by Pronzini and others, that version was less impressive).

Louis L'Amour wasn't as invested in short fiction as he was in novels, but if one's going to include Grey...I suspect Grey had a stronger nostalgic hold on the voters' memories. "Luke Short," Steve Frazee, there's a whole lot of folks who were not included who might well've been...and that might've been just one reason Pronzini produced a pulp western companion volume (even Damon Knight edited a collection of pulp western fiction in the '70s).

If you have that collection of Leonard's short fiction that was published so handsomely about seven years ago, you probably won't be disappointed.

I'd certainly consider the Cather and, I assume you mean, the Helen Hunt Jackson novels to be westerns or at very least "novels of the west"...even though the Jackson, particularly, was a contemporary mimetic novel (iirc) when it was published...

The title and those High Gear covers look familiar so I may have to go digging in the garage as long as it doesn't snow. I've never been a racing fan, but that hasn't stopped me from adding books of this type to my sports fiction collection.

I know what you mean. I'm usually lukewarm at best to most sports, but I'm usually game for sports fiction...I like fiction.

Not surprised to see Dorothy M. Johnson with two stories in that first Western Hall of Fame. What a fine writer, one of my favorites no matter the genre. She grew up in Montana, worked for a time in New York City but returned for many happy years. Loved her memoir of her frontier childhood in Whitefish, Montana WHEN YOU AND I WERE YOUNG WHITEFISH.

After an early failed marriage, she was proud of her self-sufficiency both from writing and jobs such as the director/manager of the Montana Press Association. I read that her epitaph on her tombstone in Whitefish is one word "Paid."

And it's remarkable that she wasn't included in the second volume...Peggy Simpson Curry being the sole woman writer there.

Sounds like an interesting anthology, the car-racing one. I've been tempted to try to compile a sports story anthology in Finnish, but I'm not sure whether there enough old stories to fill a book and enough younger writers to try theirs hands at writing sports stories.

If you don't feel like translation...though do you think there are no handy writers with a passion for any given sports? Even with my general nonchalance, I've written a scrap of sports fiction, and could easily write some more (classic women's volleyball, not so much the competitive beach variety, is certainly inspirational, if not necessarily of story ideas).