PITFCS was a fanzine of sorts, that was a aimed mostly at professionals in sf and fantasy writing...in those heady times of the turn of the 1960s, some contributor/recipients preferred to vocalize the abbreviation as "pit-fix" and others, more jauntily, as "pit-fux"...the informal magazine was originally issued as Digit, but quickly took on the more importunate title, and became one of the focal points for discussion among professional and semi-professional writers and a few of their interested friends, at about the same time that Earl Kemp, one of the mainsprings of Advent: Publishers, was putting together another fanzine, Safari, and its special issue, Who Killed SF?...about the commercial and apparently spiritual if not necessarily artistic collapse of the science fiction/fantasy literary community by the end of the 1950s, after such a bustling late 1940s/early 1950s. PITFCS wasn't the only fanzine with significant input from the professional writers in the field(s), as most of those writers had been fanzine-publishing or at least -contributing fans before making most or some of their professional careers in writing the fiction; it isn't even the only one which has seen a hardcover selection of its contents appear over the last two decades, as the fine The Best of Xero, Patricia and Richard Lupoff's major fanzine of the early '60s, was issued not too many years after this one hit some rarefied shelves. But what was notable about PITFCS, was the degree to which it became, in those years leading up to the foundation of the Science Fiction Writers of America, a place for pros particularly to socialize in print. Damon Knight and Lester del Rey had copublished a magazine called the SF Forum in the late '50s, but only two issues of that, and in even in two issues it had threatened to become a focal point for the discussions of the pros who were particularly prone to discuss, the ones who, for example, would attend the Milford Conferences Knight, Judith Merril and James Blish put together. (When SFWA was founded, with Knight as its first president, the Forum title was revived as an in-house organ for the body with content not altogether unlike that of PITFCS.) Not every major writer of fantastic fiction contributed informal (and some formal) essays, doggerel, letters, marketing gripes, self-assessments, and the kinds of observations Harold Ross used to refer to as "Casuals" when The New Yorker published them, but a remarkable range contributed here, from Fritz Leiber to Kurt Vonnegut to Avram Davidson to Kingsley Amis to Algis Budrys to Marion Zimmer Bradley to Isaac Asimov to Miriam Allen de Ford to Harlan Ellison to Brian Aldiss to Kate Wilhelm to Sam Youd ("John Christopher") to Basil Davenport to Arthur C. Clarke to Anthony Boucher and, of course, Merril and Blish and Knight on through to such less-well-known but often impressive writers as Betsy Curtis, Katherine Maclean, Allen Lang, and Bob Leman. And so many more.

Much of this material was rather quickly executed, some in the heat of passion, and only some of it was meant for the ages, but what this essentially complete reprinting (in a more legible form than the original fanzine was produced in) of the contents offers is definitely a slice of literary (and the concomitant social) history of certain subculture, and as such, even the most slight contributions take on a certain charge. It makes a great counterpoint to the selectiveness of the Xero volume, and an interesting comparison to such similarly freewheeling fora as Richard Geis's various magazines in the late '60s and 1970s. 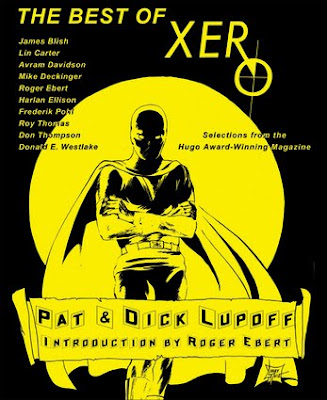 The $50 price tag on this tall, hefty (and still in print) volume is steep even two decades after its first publication, but I've had no regrets about buying two copies...so far (and NESFA has reduced the mail-order price to $40...a bargain!)

Patti Abbott is back! -and reviewing as well as compiling FFB at her blog. 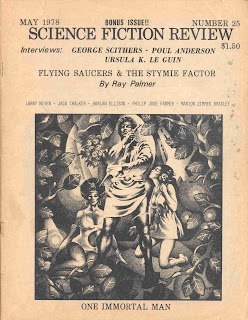 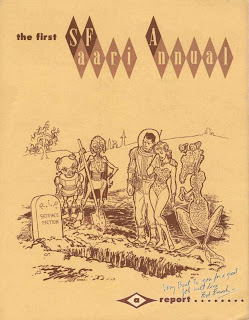 THE BEST OF XERO should be in every SF fan's collection. I own many of ADVENT's publications, but not this one. Time to search the Internet...

And, as the cover of the XERO anthology should note, it also includes contributions from the young Ed Gorman...who doesn't embarrass himself the way the young Roger Ebert does.