A video melange that won't allow for embedding, for no obvious reason, features some 1970s crime-drama theme music, unsurprisingly leaning toward jazzy themes and opening with several Quinn Martin Productions items. Among some pleasant reminders, it's answered a nagging musical question that's been bothering me in a very minor way for some years...what was that ITC program with the slightly lugubrious theme music? The Persuaders, it turns out. 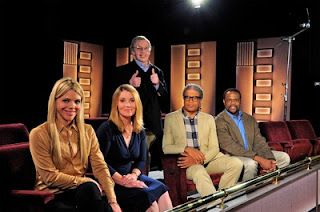 Among the missing in broadcast television at year's end: two series that haven't actually been cancelled, but are on Hiatus, which often means cancelled, NBC's relatively inventive sitcom Community (which will "burn off" some new episodes in the spring) and the American Public Television-syndicated Ebert Presents At the Movies; the latter has had its seed funding fall apart, the former was simply even lower-rated than the other good to excellent NBC Thursday night sitcoms. There's a chance both will be back, but don't bet the farm. However, never fear, Two and a Half Men and Extra are still with us. ("That's a joke, son.") 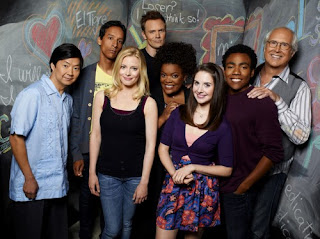 The World network, one of the smaller public-broadcasting networks that clusters around PBS stations particularly (much of its programming is comprised of PBS repeats) is offering a national live feed of an interesting-looking episode of the Boston-based Basic Black series on Friday night:

BASIC BLACK #4308 has been added to the WORLD schedule for Friday, 01/13 at 19:30 EST
BASIC BLACK #4308 – A Drum Major for Justice
As we head towards the Martin Luther King holiday we look back at the past year of protest at home and abroad. In the era of the civil rights movement, much of the attention focused on the leadership; but in this new era of protests, the focus has shifted to the masses. Have leaders become obsolete? Our conversation this week on Basic Black looks at the new role of leadership in grassroots movements, from the Tea Party to the Arab Spring to the Occupy Movement. 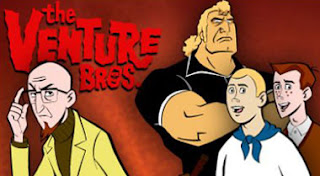 The two best animated spy-comedy half-hours I'm aware of are still with us, happily, in the form of The Venture Bros. (Cartoon Network's Adult Swim) and Archer (FX). Not, on balance, the most crowded field of artistic achievement, but thus we are fortunate to have both on now...of the two, Venture, which takes as its springboard being a parody of Jonny Quest (as befits a series in Adult Swim, a block of programming spun out of the messing-around with Hanna-Barbera characters in sophisticatedly goofy ways, beginning with semi-real/semi-surreal chat show Space Ghost: Coast to Coast over a decade ago), is the more rococo of the two series, delving into conspiracies of history and rummaging through all the sorts of cod-sf and fantasy and adventure fiction, drama, and comics tropes the scripters can lay hands on; Archer is more straighforwardly in the tradition of Get Smart!, albeit with an even more dysfunctional agency full of characters with sharper repartee...Adam Reed, producer/creator of Archer, had placed work with Adult Swim previously. Both are currently in repeats, with new episodes arriving soon. It's perhaps rather sad that between them, they have two, arguably three, major characters who are African-American, the rest essentially all pale Caucs, but as cartoons, they do tend to throw their characters up against rather strange things. Along with the revived Futurama and the odd bit such as Adult Swim's Frankenhole, we have an alternative to the rather tired set of unkidsy animation Fox is offering on broadcast. (And a fine pair of scores for both series, as well.)

_The Venture Bros._ is the darling of the comic book geek community into which I'm much in tune these days, yet I haven't seen the series myself, something I should remedy soon.

I knew there was a show called _Archer_, but I didn't know what it was, certainly not that it was animated. Another one to add to the growing list of Things to Watch.

Sorry to hear this about Community. I record the program as (IIRC) this season it is directly opposite Big Bang Theory, which may have been a big part of its problem.

Some of the Community episodes I enjoyed quite a bit and the acting was generally excellent. As happens with programs willing to experiment, some episodes flopped with me. I didn't care for the claymation segments.

I would have loved to view the Ebert program but as far as I know it isn't shown in my area. I did get his autobiography for Christmas and look forward to reading it.

Indeed, Richard, the stiff competition from the more conventional CBS sitcom didn't help...but NBC hasn't made any Final decisions yet, they say...

The Ebert show was light, to say the least, with Ebert having Charles Osgood read a review of Eberts to end most episodes, and two younger reviewers doing the balcony shtick. Cute folks, and not dopes, but not the most perceptive of critics. If it comes back, remind me of where you live and I can track it down for you.