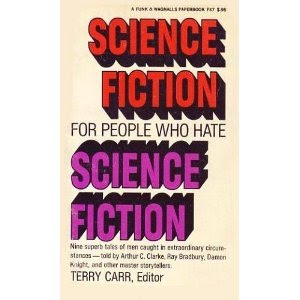 Science Fiction for People Who Hate Science Fiction was Terry Carr's first solo anthology to be published, after a volume or two of his work with Donald Wollheim on their Best of the Year sf volume for Ace Books; The Light Fantastic: Science Fiction Classics from the Mainstream (sic: there is not now, nor has there ever been, a true mainstream of literature) was not Harry Harrison's first antho, but his first, as well, was an sf BOTY, in his case for Putnam/Berkley, with Brian Aldiss as increasingly co-editing junior partner in the first volume or so. Perhaps the same impulse that drives one to work on annual showcases makes putting together this kind of instructional anthology, even beyond the usual "this is important, or at very least interesting" thrust of nearly any anthology assembled with care, particularly attractive...in the cases of these two fine anthologies, the instructional thrust can be executively summarized as "Open your eyes." (The appended "fool!" is only occasionally barely audible, almost impossible to completely suppress, as well.)

The Carr anthology brings together accessible, intelligent, (at the time) not terribly overexposed mostly sf stories (H.L. Gold's synesthesia tale "The Man with English" certainly is arguably fantasy, and Arthur Clarke's "The Star" introduces supernatural elements of the most widely accepted sort in Christendom)...Ray Bradbury's "The Sound of Thunder" hadn't quite become common coin by the mid '60s, and the Damon Knight story, despite "To Serve Man" having become a much-loved Twilight Zone episode, was nearly as famous as Knight's other early joke story, and even more sapiently pointed). While "What's It Like Out There?" remains The cited example of What Else Edmond Hamilton could do aside from planet explosion, and the Wilmar Shiras a slightly odd choice in this set of encouraging the outlanders to try some of the pure quill. Algis Budrys, in reviewing this one at the time, noted that people who hate sf hate reading, and the only way to get them to take up this book would be for it to be socially necessary to have on their coffee-table or equivalent (as Cat's Cradle and Slaughterhouse-Five and Stranger in a Strange Land and to a lesser extent at that time Dune and No Blade of Grass and The Child Buyer would be)...but the thoughtful reader who thought they hated sf somehow (probably more common in '66 than today, if not much moreso) could find some diversion here, at very least. Or, by the end of the decade, could enjoy making a joke about reading up on the topic in their Funk & Wagnalls paperback edition.

Harry Harrison attempts a slightly more double-edged trick, in getting the (presumably well-meaning ignorant) snobs against sf to consider reading the form, and to get similar snobs within the sf-reading community to look beyond the commercial labels for the pure quill wherever it's actually found. Harrison, too, gets in some work in this "sf" context that is arguably (the Cheever, the Greene) or almost inarguably (the Lewis, the Twain) fantasy rather than sf, though the sort of fantasy that sf people usually find agreeable, even leaving aside the time-travel paradox introduced in Anthony Burgess's "The Muse" (Burgess, of course, couldn't leave sf alone any more than C. S. Lewis could, and saw no more reason to do so than Lewis, I'm sure). And, of course, Gerald Kersh and Jorge Luis Borges had no qualms about being considered writers of fantasticated fiction, as long as no one insisted that was all they did or could do, and, happily, no one has...if anything, Kingsley Amis, that passionate advocate for sf so labeled, has seen his advocacy and contributions to the literature all but forgotten in favor of his Angry Young Man (and Older Man) satire, even when careful to have Lucky Jim a reader of Astounding Science Fiction magazine back when Analog was still called that.

It's a funny old world, and there's no shortage of ignorance of all sorts, but that's what this FFB exercise is here to combat, in its small and often nostalgic way. I liked both these anthologies a lot as a kid, and would still like them if I was first to open them today. What more could we ask?

Some wonderful stories, all right. I still remember reading some of them in the digests and anthologies of the '50s when I was a kid.

And even the minor stories are worth the look. Carr and Harrison might not've always reached for the perfect story in their many anthologies (and Harrison might consider doing another, yet), but they only infrequently took in a bad one. (Of course, they'd probably argue it wasn't bad, but they'd be sadly mistaken in a few instances I recall. And they both introduced me to some brilliant stories...as did their predecessors in BOTY annualing in sf, Bleiler and Ditky (augmented, as time went on, by Earl Kemp) and Judith Merril...Bleiler and Merril (and more quietly Kemp) all went on to other impressive anthology work when they hadn't already so engaged...

Well, Evan, you have to consider the both the insouciant challenge (c'mon, we dare you to read this book) and the straightforward implication (this is the sf so good, or at very least so accessible, that even you the Hater will like this work). I suspect it did well enough in the mid '60s, and F&W kept the paperback around for some time (I believe my copy was secondhand, but it might've been new).

I think Terry Carr was one of the great SF editors. His series of ACE SCIENCE FICTION SPECIALS won plenty of awards. I'll have to track down this anthology.

You could do worse than both, George. Harrison no slouch in this regard, either.