There are four albums under consideration here today, four of the more memorable of the records of writers reading their own work I've heard...and it's rather surprising to me, looking back, how infrequently I've come across recordings by women reading from their own work, even when (as with Ursula Le Guin and Joanna Russ's recordings for Alternate Worlds Records, or C. L. Moore's for Caedmon) I was acutely interested in hearing them...I'll start looking around for them at this late date. Such recordings as Sylvia Plath reading "Daddy" would pop up on poetry anthologies from Caedmon in the libraries of my youth, but I was usually lucky to find the items below in circulating collections or on sale (another regret is in not finding Fritz Leiber or Robert Bloch's recordings back when)...we can hope that that speaks less of unconscious sexism on the part of librarians than of the pilfering habits of unsavory patrons. Most of the better audiobooks I've picked up in my majority have been actors' recordings, when not dramatizations, of varying degrees of quality...including a fine anthology of short mystery fiction on cassette, with particularly good readings by actors of Liza Cody and William Campbell Gault stories, that I've managed to misplace some years back (and I might be conflating two different anthologies on cassette, too). But for some work literally in the literary artists' voices: 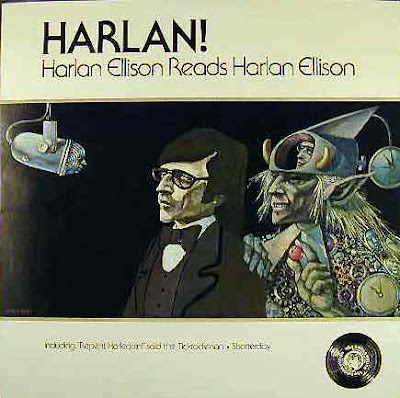 Alternate World Recordings was a project of the Torgesons, Roy Torgeson also being active in the 1980s as an editor for Zebra Books, and their label briefly flourished in the latter '70s and early '80s as one of the best for recording fantasy and sf writers particularly...Harlan!, featuring Harlan Ellison reading his early "'Repent, Harlequin!' Said the Tictockman" and the then fairly recent "Shatterday" (published almost simultaneously in the US in men's/skin magazine Gallery for September 1975, and in the UK in Science Fiction Monthly v2 #8, dated August 1975), was one of their most popular offers. I believe it was the first recording issued with Ellison, an enthusiastic and skilled dramatic reader, in this role, and he later recorded "Repent" again, I think less well, for HarperAudio (and with his subscription club, the Harlan Ellison Recording Collection, probably eventually rerecorded the other as well). "Repent," an absurdist dystopian/rebellion short story, was the first story to get Ellison much positive critical attention in the sf field upon publication in Galaxy magazine in 1965, despite Dorothy Parker positively reviewing some of his crime-fiction and related writing a few years earlier, and having established his professional bona fides over the previous decade in several fields. "Shatterday" was one of his most warmly-received horror stories of the past several years, involving a fellow who has apparently developed his own Secret Sharer sort of doppelganger, and that Other is living his life rather more adeptly than he himself is. Ellison reads both stories with brio, stumbling just once in each of the (single-take?) sessions, and it's a pity that (apparently) copyright concerns (as far as I know, all Alternate Worlds records fell in a black hole after the death of Roy Torgeson) have helped keep these out of the public ear for decades. 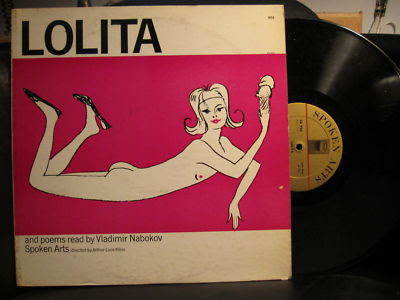 Vladimir Nabokov reads a selection from Lolita on side one, and on side two:
The Ballad of Longwood Glen
Rain
Lines Written In Oregon
On Translating "Eugene Onegin"
An Evening of Russian Poetry
The Swift
The Discovery

Nabokov's poetry reading can lean into singsong at times, but the performances here are generally good, and better when it comes to the passage from Lolita, the physical confrontation between Humbert and Quilty. The cadences and wryness of Nabokov's delivery are everything one might want, and I think I detect a bit of the Nabokov in the vocal approach Jeremy Irons took in his assaying the role for film. Here is a radio episode that offers much of the content of this album, including the Lolita chapter. While this is a complete upload of the album, with the chapter and poems broken out by track. 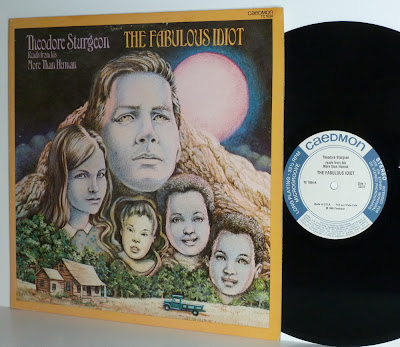 When people speak of the parts of Theodore Sturgeon's most widely-hailed novel, the Gestalt-group-mind tale More Than Human, they usually focus on the middle section, published by itself as "Baby is Three" (a punning title in context), but for his Caedmon recording Sturgeon chose, at least to begin with, to read the opening section, "The Fabulous Idiot," and he does so with a subtlety and grace that allows the elegance, empathy and insight of the prose to hit home, as an apparently mentally disabled, homeless youth finds himself drawn to the syzygy (so important as a metaphor in Sturgeon's fiction at that time) that begins to take place by the end of the passages read. I wish we had more recordings of Sturgeon reading his short fiction, but I can't imagine too many being disappointed by this album, except in that (as far as I know) he never went on to record the rest of More Than Human. 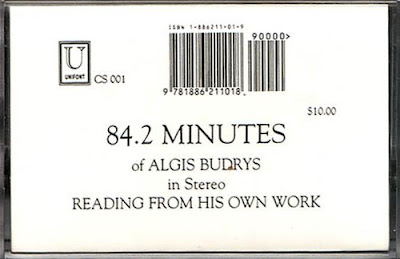 Algis Budrys, actually Algirdas Budrys and like Nabokov a Slav for whom English was not his first language, was also like Nabokov in his precise and graceful use of the not quite mother tongue, and for his incisive and often sardonic view of human events. With his recording engineer son, he decided to release a collection of his short fiction on cassette in 1995 as the only audio release from his personal imprint Unifont, which was one of his tabletop businesses in the '80s and '90s, most visibly to the public publishing some bicycle-repair manuals and his magazine Tomorrow Speculative Fiction from its second issue, the first having come from the collapsing Pulphouse. (The April, 1994 issue had two vignettes, Harlan Ellison's "Attack at Dawn" and my first professionally-published fiction, "Bedtime".) One of the late stories Budrys wrote for himself, under one of his old pseudonyms he revived for that purpose in Tomorrow, is included here, the "William Scarff" item:

All of these are worth hearing, even as they were worth reading, and at least the earlier three were among his most important work (the new story doesn't shame them), with "Engines" being his response to and different take on the matter of, I've always suspected, "Casey Agonistes" by Richard McKenna; "The Price" is a bitter little armageddon fable, and "Never Meet Again" simply one of the more devastating stories of Nazi Germany victorious in WW2, a possibility that had a particular resonance to a man who was perhaps the last official citizen, in the US at least, of pre-WW2 Lithuania and who witnessed, as he mentions in various memoirs, the beserk reaction of the German neighbors of his diplo-kid childhood to a drive-by by Hitler at his early height of popularity, an incident he describes as demonstrating to him that he was surrounded by werewolves. Good, clean readings, not much frippery, and I should look around the web to see if this is archived...cassette not being the medium of choice for anyone, except for its ease of duplication and home-recording back when, for many obvious reasons...

Meanwhile, the September 1965 issue of Billboard that announces the Nabokov album (and gives it four stars out of four) has Top 100 album and singles charts which are pretty staggering in their diversity and, with some exceptions, quality...particularly when compared to such lists for most of rest of the years since.
Posted by Todd Mason at 3/23/2012 11:00:00 AM

A great twist on the FFB theme! I never have time for audio books. I've got the Punk Rock Jukebox on now while I work and occasionally it takes me out of the work. But sitting and just listening and not doing anything else -- the clock ticks too loudly. Although suddenly the bath seems like the ideal place. Bathing with Nabokov, there you go.

I'm not the first, I should note, to review audiobooks in FFB, but this is the first time I've done so, and beyond that to opt for briefer albums than most of the talking books of their era (which were moving from 16 RPM extra-long-playing discs to mostly cassette tape in those years). Given that my job is very "left-brain," I get to listen to a lot of spoken-word materials during work while doing the simpler tasks...though I first heard three of these four in my relative youth; I was no kid was I by the time the Budrys tape was released (and probably first listened to it while reconciling the cash drawers and doing the payroll at a Borders).

A gret post Todd - I love all these writers and Ellison in particular is just such great value when you can hear him. I'm a great fan of audio and radio productions, so this is a great adition to the FFB roster.

I hope you get to hear all of them, eventually, then, Sergio...I own legit copies of two, and have a home-tape of another, and might just have to seek out the legit copies of the two I don't have...

Thank you for the reminder of what was once out on the market.

The Alternate Worlds Ellison release was duplicated/reissued by his Recording Collection - the same metal masters were used to press the reissue, so "Shatterday" was not "rerecorded" for HE 101.

Blackstone Audio has reissued Robert Bloch's "A Toy For Juliette" as part of the Ellison collection "Pretty Maggie Moneyeyes - The Voice From The Edge Volume 3." That leads to "The Prowler in the City at the Edge of the World" - so there's a healthy portion of the AWR 2-LP "Blood..." right there.

Thanks again, and all best wishes.

"'Repent, Harlequin'" *was* re-recorded, however...that was what I refer to. Thanks for the pointers on the Blackstone reissue...though, sadly, that doesn't include the other recordings Bloch did for AWR...Fritz Leiber's are something else I'm looking forward to hearing.

And you're quite welcome, and thanks very much for the info and feedback!

Hi Todd,my name is Martin, I'm writing from Argentina. I'm Ted Sturgeon reader and had no idea that he had recorded some of his work. It is a great and pleasant surprise. I make you a question, do you have any idea if that recording can be achieved? Will it be released on CD? Do you have this recording? Thanks for the information, greetings.

Well, Martin, some record dealers in the States or possibly even in La Argentina might still have copies, and since NewsCorp/HarperCollins owns the Caedmon catalog, they might eventually get around to releasing the recordings on CD...but it's a slim chance. I don't yet own a copy of this recording...but there's a chance that there's an MP3 or other sort of file floating around in cyberspace. Buena suerte en buscando!

Todd thank you very much for answering. If I ever got, I warn you.