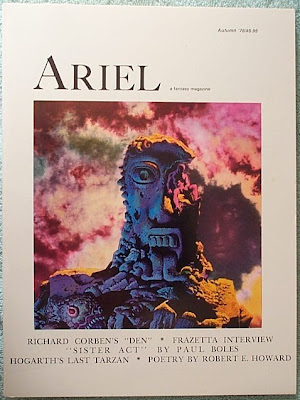 The four bestselling fantasy-fiction magazines in the US (and probably the world, unless we count comics among the fiction) in 1978:

Just the other day, I finally purchased a slightly battered copy of the fourth and last issue (or volume) of the irregular magazine (in book form, sort of, or periodical book) Ariel: The Book of Fantasy, issued October, 1978, Ariel's first issue/volume, as Ariel: A Fantasy Magazine, having been issued in 1976 (I suspect the subtitle change was driven more by distribution questions than by anything else...after the first issue, the title was copublished and distributed by Ballantine Books, but the look and approach of it hadn't changed).

That sparked me to note that the cover-date/release month of October (as Ray Bradbury would be quick to note, the most fantasticated month even given all the traditions that infuse others with capital-M Mystery, not least December and its solstice) of 1978, the first full year I was collecting new fiction magazines, was an unusual month, in that the only issues that year of Whispers, the most impressive of the little magazines devoted devoted to horror and fantasy fiction, and Ariel were published, and the quarterly Fantastic and, of course, the monthly F&SF (with its usual anniversary issue, its first issue as a quarterly being an autumn issue in 1949) all produced issues of note, as the best-of-the-year volumes were quick to recognize as well.

The Ariel is, like all the issues/volumes, elegantly produced on heavy stock and with brilliant full-color reproduction of illustration and artist portfolios that range from good professional work to impressive; hence the $7.95 cover price ($8.75 in Canada) of this one (at a time when the elaborately illustrated, in b&w, and "book-paper" Whispers would cost you $4, and Fantastic and F&SF had just raised their cover prices that year to $1.25 and were published on paper a grade or two up from newsprint, not too different from many paperbacks at the time...in fact, both magazines were printed at paperback-oriented printers, and featured in many issues the same sort of stiff, glossy paper cigaret ads in their centers that some paperbacks featured in that era). Even my battered reading copy of the Ariel is beautiful and clearly expensively produced. (Conveniently enough, the Algis Budrys review essay in the F&SF reviews the third Ariel, where AB jokes that surely among the publishers there is somewhere an accountant who has been rendered helpless and gagged.)

As noted below, the fiction contents of this Ariel include a Jane Yolen vignette (a deft fable), a Bob Shacochis Arthurian historical fantasy (Shacochis more famous then as now for his contemporary-mimetic fiction and war reportage, though the latter might well have just begun in the late '70s), and poems by Ray Bradbury and Alexander Theroux (the latter particularly an attempt to channel Christina Rosetti, the former fairly typical of Bradbury's not bad versification...but his best poetry isn't a touch on his best prose). One thing I'd forgotten about Ariel was that, like the other magazines (even to some extent Whispers), it was open to fairly straightforward science fiction, as well, so the first story here is Jerry Joseph's "Fathom 242," a decently predictive account of chaos in Africa, the increasing bullying by corporations of the Third World, and growing problem of drought, focused in part around an underwater colony, handsomely illustrated (one might say, of course) by Jack Desrocher...notably, neither of these folks have since become Names to Conjure With in fantasy/sf publishing...long-term fan-writer John Pocsik, here with "Surprise Visit" (which features a viciously quarreling married couple adorably named George and Martha), was almost "an Ariel writer" (twice in the magazine, rarely publishing elsewhere I've seen), if Ariel had published enough issues to make that truly meaningful. Chester Sullivan's "The Eggs of Hann," despite the title that harkens vaguely punningly to Seuss, is a retelling in quasi-Native American context of the Lady of the Lake/Arthur tale...and like all but three stories here, is very short. The first-published of Charles Platt's profiles eventually collected as Dream Makers, that of Isaac Asimov, is here in slightly edited form, as is an odd little essay about MRI, the Midwest Research Institute, by Geneva Zarr. Not only does Ariel look like a lushly-produced magazine, it acts like a predecessor of Omni as well. And the portfolios, John Berkey's interview/selection being the largest and perhaps most impressive, and illustrations probably served as a bit of a nudge to Keeton and Guccione when they launched that magazine...for that matter, I wonder how much an inspiration to the publishers of the elaborately produced Chacal (which became or at least preceded from the same publishers and editors Shayol) or, for that matter, Heavy Metal (though of course Metal Hurlant was a bigger inspiration there). 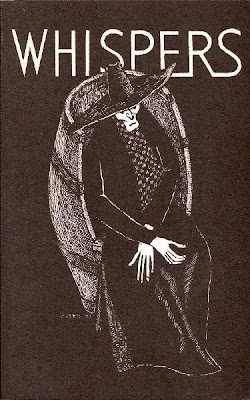 The Manly Wade Wellman tribute issue...good work from him, illustrated by Lee Brown Coye. The most brilliant story in the issue might be Dennis Etchison's "The Pitch," with Ramsey Campbell's "Heading Home" also more than solid. Robert Bloch's Strange Eons (excerpted) is my second-least-favored of his novels I've read, though I do appreciate the attempt to put an end to the Cthulhu Mythos...and while Ramsey Campbell reviewing Wellman's huge retrospective collection, and Stephen King in turn reviewing Campbell's novel, might've seemed a bit incestuous, I'd counter-suggest that it was indicative of the almost clubhouse-like ferment of the magazine, which had just launched its companion anthology series with Doubleday in 1977, that we see in practice...and King doesn't see any reason why he should be left out. Brian Lumley, who began his career, not too long after Etchison and Campbell had in the early '60s, as a somewhat older man already having served in the British military, often did his best work for Whispers and Campbell anthologies, much better than the Cthulhu/boy's adventure novels that have made him a reasonably popular writer in the decades since. Ray Russell and Ward Moore also writers of considerable stature in the field, even if Moore was much better known for his sf, and Russell's career as a fiction writer perhaps somewhat overshadowed by his Hollywood work, directly and adaptations of his fiction, and editorial duties at Playboy... 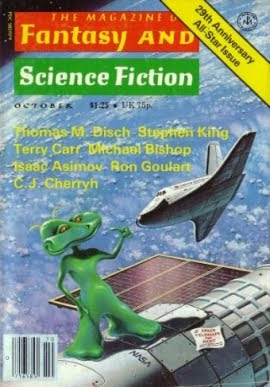 Brilliant stories by Terry Carr ("Virra") and Thomas M. Disch ("The Man Who Had No Idea"). Absolutely atrocious first publication: "The Gunslinger" by Stephen King..."Cassandra" was probably C. J. Cherryh's most acclaimed story that year, and the Michael Bishop and Ron Goulart stories were fine examples of what they could do. The Pronzini/Malzberg in this issue, like theirs in the Fantastic, was a bit of black humor, but not as good as the longer story, if more explicitly fantasticated (I'd say Ted White made the better call in erring on the side of story-quality in this case, vs. Ed Ferman's erring on the side of relevance to the other contents of the magazine). 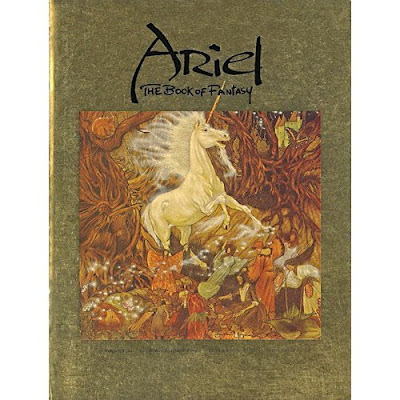 As noted above and in further detail below, includes stories by Jane Yolen ("The Tower Bird") and Bob Shacochis ("The Last Days of Arthur") and a poem by Ray Bradbury ("Rekindlement"). 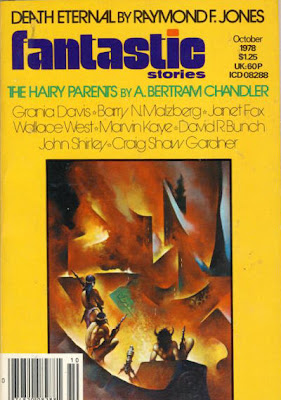 Brilliant novelet by the late Janet Fox ("Demon and Demoiselle"); impressive work by Bill Pronzini and Barry Malzberg ("Another Burnt-Out Case"), Craig Shaw Gardner ("A Malady of Magicks"), John Shirley ("Tahiti in Terms of Squares"); remarkably bad Grania Davis cover story, given that Davis is a good writer: "The Mesa is a Lonely Place to Dream and Scream and Dream." The Chandler, Jones and West stories cited on the cover are mediocre, with the Kaye, Andrews and Bunch stories better. John Rodak's illustration for the Chandler is notable (Fantastic featured a lot of good illustration, F&SF usually none at all beyond the covers and the Gahan Wilson cartoons from 1964-1981, and other cartoonists after, except for little original-logo images, sometimes augmented with facial expressions, at the ends of some stories to fill empty spaces).

ISFDb's indices of these issues: 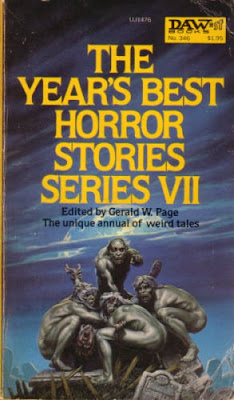 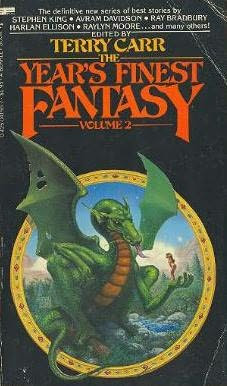 91 • The Gunslinger • [Roland] • (1978) • novelette by Stephen King
(Carr had a knack for focusing on the absolute worst Stephen King stories he could find, such as "The Cat from Hell" in the first YFF; Gerald Page at least would collect such rather good ones as "Children of the Corn"--much better in prose than as a film. Carr also took "The Man Who Had No Idea" from F&SF for his sf boty 1978 volume. Carr's old boss, and co-editor of their boty volume at Ace Books 1965-1971, Donald Wollheim--assisted, as was Lin Carter, by Arthur Saha--took "Cassandra" for his sf boty.) 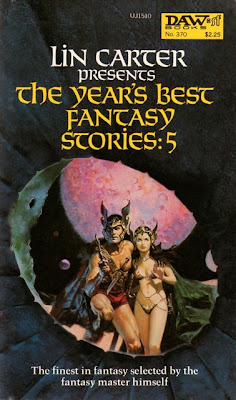 CEMETERY DANCE and BLACK GATE and BLACK STATIC and the last of the old regime of WEIRD TALES (before new editor Marvin Kaye's issues start appearing) don't quite make us forget how impressive their dead ancestor-magazines could be, no...with only F&SF among the quartet still with us. (BLACK STATIC being the only magazine cited in this post to come from Britain...dunno if the newborn FANTASY TALES or perhaps DARK HORIZONS, if already publishing by 1978, was the most widely-read UK title in that year.)

But these October issues all have something to be proud of. I've finally procured a copy of the ARIEL, which sparked this post.

Geeze...I know I'm getting old when Bill Crider refers to magazines dated October 1978 as "the good old days." For me the good old days was the 1950's. Does anyone reading this go back to the 1940's?

Retrospectively, of course. But I was reading fiction from the '40s and earlier in the 1970s (and just a bit of it in the late '60s)...these magazines would've hit the stands and the mails not long after I'd passed out of my "golden age" of 13...but it is hard to look at the lineups in these 1978 issues and not tote up the folks we've lost since...

And, Walker...think about how many people, mostly younger but not exclusively, look upon 34 years ago as the Ancient or at least the Dead Past...it's a good chunk of any life...