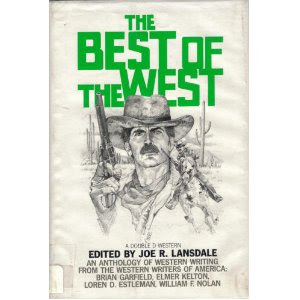 Joe Lansdale's first anthology apparently only saw one edition, unless there was a book club version identical in all but pricetag to this Double-D "trade" edition, and that's a shame, much in the same way as Doubleday's misspelling of Neal Barrett, Jr.'s surname on the dust jacket; as with Neglected Visions, the Barry Malzberg et al. reprint anthology I reviewed here some months back, this is a book that was tossed off casually (at best; "contemptuously" is the word Barry used for D-day's treatment of their "genre" lines at the time), despite being one of the best books I've read so far, if not the best, with reviewing for this "Forgotten Books" roundelay in mind. See the uninspired package slapped on the cover to the left, here.

Lansdale bemoans in his intro the response he got for a request from fellow WWA writers for innovative, new fiction (he got stacks of tear sheets and photocopies of pulp and Zane Grey Western Magazine publications, for one, and a whole lot of conventional material for B), and makes a passing reference to how this volume isn't quite a Dangerous Visions for western fiction as it stands, a reference I imagine would be lost on many typical Double-D readers, who might not know about Harlan Ellison's 1967 anthology devoted to previously unpublished taboo-breaking sf and fantasy; more a heads up to his editors at Doubleday, perhaps, or something he hoped they could point to in hoping to energize the sales force (DV having been a surprise hit for Doubleday all those years before, and comparisons to DV have become something of a mantra for the marketing of anthologies of new fiction since). But what's important about this book, aside from its undeserved obscurity, is both how good and how fresh it remains. (And the tendency for the stories to be rather short and pointed, while fully-fleshed out, reminds me even more of the Hitchcock Presents: reprint anthologies than it does of DV; a John Keefauver story here does nothing to alter that perception.)

Brian Garfield, the recently late Ardath Mayhar, Jeff Banks, Lenore Carroll (with a very funny, literally peachy, sexually-charged culinary encounter), Thomas Sullivan, Neal Barrett, Jr., Lee Schultz (with a short, touching poem), William F. Nolan (with a teleplay for a pilot film for an unsold series), and Loren D. Estleman provide westerns from the traditional historical period, even if Barrett's pushes the late edge of that era, being set after the turn of the century (and bringing together Pat Garrett and some less likely historical figures; Lansdale suggests that only Barrett could write such a story, at least write it well...E. L. Doctorow has certainly tried, hard, and been given a lot more credit as well as money for doing less well; Doctorow definitely wouldn't've included the unobtrusive Bugs Bunny reference). Chad Oliver and John Keefauver offer contemporary stories with strong elements of fantasy in them, Keefauver's unsurprisingly a tall tale in a mode a shade more restrictive and neatly tucked-in than R. A. Laffterty or Howard Waldrop might produce; Oliver's, also unsurprisingly, draws on his anthropology background. LoLo Westrich, Elmer Kelton and Gary Paulsen give us contemporary westerns, Kelton's particularly a reminder that the economic recessions of the current day aren't any newer than this anthology, certainly, more than a quarter-century old now.

There isn't a story here that isn't worth reading, that isn't at least engaging and thoughtful in one manner or another, which puts the book ahead of DV and most other original anthologies in most ways; that it features William Nolan's teleplay, unproduced even though commissioned by ABC at the height of its jiggle/nostalgia success in the latter '70s, as its most conventional narrative, in unconventional format for a literary anthology (as Lansdale notes on both counts), is both interesting for that fact and that ABC, having just had its greatest success ever with Roots, probably shied away from this script's challenging portrayal of its Texas residents' complacency about slavery. (It probably didn't help also that there are no sympathetic Mexican characters in the play...ABC's excuse that their commission was for a "new Zorro" but this was Too much like Zorro.)

I wasn't surprised this was a good book, but I was surprised that it was even better than an old favorite of mine, Razored Saddles, which has in comparison seen several editions and become a bit of a touchstone.

I read this one years ago. A very impressive book, despite the packaging.

Given that I've had copies of RAZORED SADDLES and DARK AT HEART for years (RS for decades), it's odd that I hadn't sought this one out earlier...and it really should've seen more editions than it has, and a lot more attention.

I'm hunting down BEST OF THE WEST after reading your review, Todd. Excellent choice!

Thanks, George...I certainly won't be ashamed to have urged you on.

It's good work, as Mayhar's western fiction has been in my experience. I rather wondered why the protagonist didn't have better armament at her disposal, but that might well've ended the story rather quicker.

I looked through my western section to see if I had this anthology but that turned out to be a hopeless task. Too many damn books, I say, and I guess I have to agree with She Who Must Be Obeyed.

Despite having just agreed I have too many books, I just went on amazon.com and ordered a copy for one cent plus postage. I guess I am crazy for books, mutter, mutter.