Reprinted, with permission, from FictionMags. Editor, publisher, and former political prisoner Earl Kemp is perhaps currently most widely visible for his online fanzine, eI and his book, with Luis Ortiz, Cult Magazines: A to Z.

So he finally did it, died! Damnit! Gore Vidal was a great hero of mine,
so much so that I was somehow intimidated by him and his perceived
knowledge and power. He was one of the very few people that I admired
that I did not allow myself to accost. For some reason never known I
simply didn't dare. What I wanted to do, of course, was throw myself at
his feet, grab him around the knees and babble incoherently about how
much I really, really liked him/his products.

He and I spent about ten days at the same book fair in Nice some time
during the late '60s. He and I kept running into each other every time
we turned, walking down corridors, in and out of elevators. It got to
the point where we were smiling at each other in reserved recognition.
Then we began nodding at each other as we passed and, finally, speaking
in weak murmurs, "good morning," "good afternoon," etc. But we never got
into any one of those meaningful dialogues.

At the same book fair, another hero but one of significantly lesser
stature, was introduced to me by his gorgeous trophy wife. Harold
Robbins, who had influenced my life, my reading habits, spent time with
me discussing his works and mine....

And now they are both dead. All my heroes are leaving me far behind.
With any luck I'll catch up to them eventually. 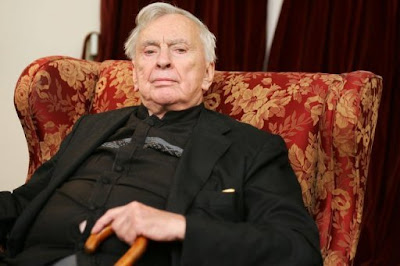