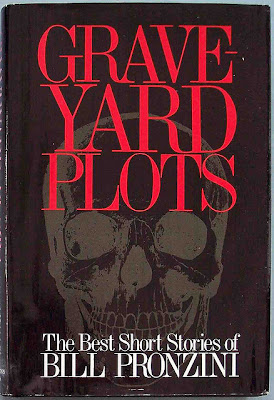 This volume is widely available in spoken word/audiobook recordings on the web; Archive.org's DAISY recording is here (also there, a link to the Open Library web-text).

Bill Pronzini's work has been a welcome sight for me since early in my career as a reader; as I tore through all the kinds of Alfred Hitchcock-branded anthologies I could find as a child, even the most mild of the books drawn from Alfred Hitchcock's Mystery Magazine in the 1960s and '70s was likely to have a solid story, rising above the run around it, by Pronzini (or, if the volume drew from issues before the mid-'60s, I'd content myself with the C. B. Gilford and Henry Slesar stories, or a number of others')...Pronzini was doing good work seemingly out of the box as a newly-pro fiction writer.  As a young teen, finding Pronzini's stories in the new issues of the likes of Fantastic and Ellery Queen's Mystery Magazine never upset me...particularly when they were of the caliber of "Another Burnt-Out Case" (with Barry Malzberg), the kind of surreal humor that collaborating with Malzberg often brought out in Pronzini, or the brilliant "Strangers in the Fog," collected in Graveyard Plots. This was the first book devoted to Pronzini's own writing that I purchased, and while one can quibble with the notion that this or that story belongs (or with the absence of any given story...particularly given how diversely Pronzini has written) even in a volume looking back from 1985, this is a solid and impressive survey of his career up till then...including some of those stories from early on, familiar from being collected by Robert Arthur or Harold Q. Masur in Alfred Hitchcock Presents: volumes...and one could eventually turn to the likes of The Best Western Stories of Bill Pronzini (1990) for some more of the picture... 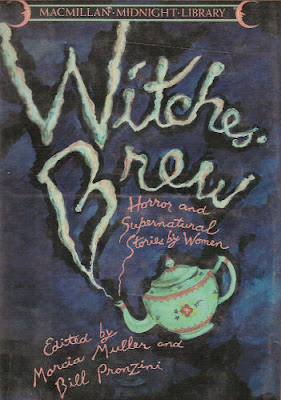 But along with being a gratifyingly prolific and consistently good writer, Pronzini was also one of the few hugely prolific editors of anthologies and collections (including of the other volumes of the Swallow Press Best Western Stories series) of the 1970s onward...working with Martin Harry Greenberg (Inc.) and his friends such as Barry Malzberg and Marcia Muller (who, of course, would eventually marry him) to produce a wide-ranging body of books, only a small sampling of which have been reviewed on this blog already. Pronzini's books were certainly methadone, at very least, for the lack of new Alfred Hitchcock Presents: volumes in the 1980s, to say nothing of supplementing the store of more specialized horror and suspense compilations that I had found from the 1950s-'70s, but which were somewhat less common from the 1980s onward.  Two such items, collaborations with Muller, deserve note here, as good fun and fine collections:

--Where we see more chestnuts than in most Pronzini anthologies, but also a few items that are likely to have gotten past all but the most devoted readers of horror and suspense fiction...there are only so many West readers who have also read Counselman, and they both might surprise the du Maurier enthusiast, much less the reader who vaguely remembers The House of Mirth or A Room of One's Own (much better than they do Orlando). 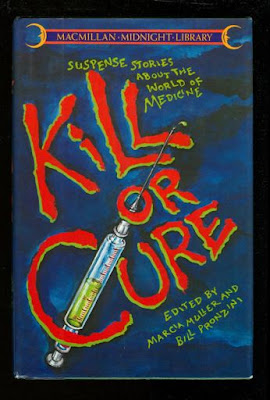 (courtesy WorldCat)
Kill or Cure: Suspense Stories About the World of Medicine, edited by Marcia Muller and Bill Pronzini
(Macmillan, 1985)

--where we see a representation of less famous and widely-reprinted stories, for the most part, and a set more devoted to the Usual Suspects in crime fiction-writing...but the editors are not afraid to reach for a story by old favorite Ben Hecht, a reasonably prolific cf writer when not doing his more famous satirical work.

I dug these books enormously, but, sadly, they were widely remaindered, which suggests to me that they weren't doing as well in their trade editions as they might...oddly enough, they sold so well as remainders that "instant remainder" imprints (such as Crown's Bonanza line) would often reprint them for that market.

So...happy birthday, Bill, on Saturday the 13th, and thanks for all the good work...with a tip of the Hatlo hat to Barry and a deep bow to Marcia, as well (and perhaps sparing a thought for MHG...).

For more Pronzini reviews on this blog, try here;

Execellent and illuminating post Todd - although I have some of the contents from elsewhere, I dont have the GRAVEYARD PLOTS collection so shall seek it out. 'Instant remainder' sounds like the title of an excellent short story ...

Certainly a terrifying one in some circles, when publishing was all books and no ebooks...as someone in and around bookselling and libraries for most of my young adulthood, it's potential thus was lost on me as a natural term of trade, till you mention it...and, thanks, Sergio.

I should mention in the body of the post the remarkably wide availability of the spoken-word recordings of GRAVEYARD PLOTS on the web, I hope not actually pirated...

I enjoyed these collections that seem to disappear after the Eighties were over. Now, no print publisher would issue books like this. Like you, I enjoyed the work that Bill Pronzini and Barry Malzberg produced over the years.

The small presses are still producing interesting anthologies, and some of the trade publishers do so some of the time...when they have a hook to hang them on...but I suppose once I finally get into the hang of ebooks, I will be glad of the ease of publication and lack of tree-martyring and manufacturing and transport costs...sigh.

Fascinating post! I didn't even know about those anthologies! Bill Pronzini read over Clues and Corpses, my book on crime writer Todd Downing and his mystery fiction reviews (Bill also wrote the preface), and his knowledge of genre history is terrific I know. We see it too in 1001 Midnights, Gun in Cheek, etc.

Well, I suspect you have a lot of anthologies to catch up with! I assume you mean solely his work with Muller for the Macmillan Midnight Library?