FFB: I'M DYING HERE by Damien Broderick and Rory Barnes, and a query: Who is your favorite short story writer who (has) never published a collection?

In celebration of five years of Friday's Forgotten Books, as hosted and originated by Patti Abbott, I look back, and with searching hope suggest some books that could and should be put together (and, one hopes, not forgotten). One of my least-read reviews, this one from 2010, for a book which deserves at least a few more eyetracks: 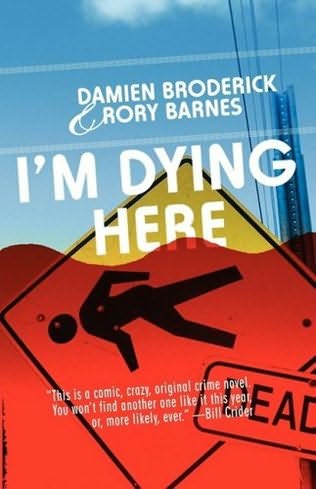 OK, this one gets provisi. Damien Broderick is a friendly netquaintance of mine, which is how I first became aware of this novel; like Bill Crider, whose laudatory blurb is quoted on Amazon, and myself, Damien is a member of the FictionMags list, and a fine and accomplished fellow. I suspect Rory Barnes is, as well, though the novel under discussion here is the only Barnes I'm sure I've read, and I've not corresponded with him...so, favoritism warning out of the way, I'll note that Bill is quoted thus: "This is a comic, crazy, original crime novel. You won't find another one like it this year, or, more likely, ever."

I'll disagree with that only to the extent that what it reminds me of, powerfully, is a Donald Westlake comic novel about Dortmunder. I don't mean a pastiche, nor certainly a copycat; I mean it feels more like a Dortmunder than even most "caper" novels do, and I mean that as high praise. If Dortmunder was an Australian reasonably proficient and somewhat principled crook rather than a Yank, his misadventures would tend to resemble these. This is a book you should pick up if you find yourself rereading The Hot Rock for the seventh time, and finding it rather familiar somehow (yes, a variation on that old line). It also, in touching on sundered families and attempts at pulling some sort of relation back out of the mess, reminds a bit of the late John D. MacDonalds, but still, the comic tends to trump the tragic throughout.

So why is a new book "forgotten"? It's had its difficulties in the US market, at very least. The first edition carried the Oz-friendly title I Suppose a Root's Out of the Question?, which if one pronounces "root" as "rut" will probably come clear to any puzzled folk--even when this question is posed in the novel in its new edition, the query is rendered in more Standard English, for the benefit of Yanks and such. So far, the novel's gotten not nearly as much attention as it deserves, and its small publisher doesn't have the budget or the clout of a few of the other major projects in crime-fiction specialists active today (how this book got away from Hard Case, I don't know), and it'd be a pity if we let it slip by unremarked.

****And...
Who *is* your favorite short-fiction writer who hasn't yet published or had published a collection? In comments, below, Jerry House plumps for Vance Aandahl and the more collected but underappreciated Jack Ritchie. Please feel free to add your suggestions.  (Then there are those folks who have committed only one collection of short fiction so far...including Janet Fox, Wilma Shore, Bill Crider [and, latterly, Patti Abbott], David I. Masson, T. L. Sherred; Mark Clifton's had only one in English. Sometimes that's because they've only written that much short fiction, essentially true in Sherred's case, but too often I fear other factors have kicked in, including publishers' preference, in most cases, for novels.)

I'm going to say, for now at least, Ray aka R. Faraday Nelson, who might be most famous for "Eight O'Clock in the Morning", the brilliant short that was adapted for the amiable but less-brilliant film They Live! Among the other brilliant Nelson fiction is "Nightfall on the Dead Sea" and the fine novella "Turn Off the Sky"...he's written several novels over the decades, beginning with an apparently slight novel in collaboration with Philip K. Dick (who's that guy?) I still need to read: 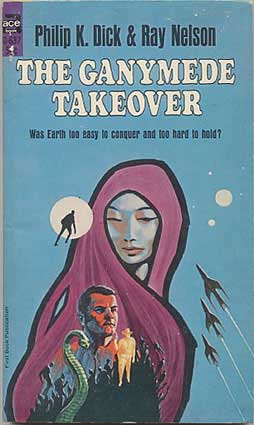 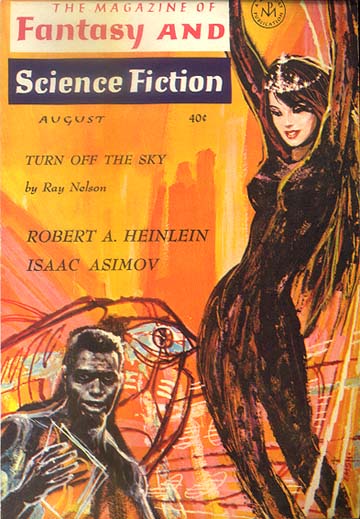 Jack Gaughan and Ed Emshwiller. As with Nelson (or Dick), one can do worse.

The world could stand a collection of David Campton's short fiction, as well. Though he was mostly a playwright. (I wasn't aware that C. B. Gilford expended considerable energy as a playwright in the 1960s, as well--his stories as well as his plays seem to be uncollected; Wilma Shore, mentioned above, was particularly active as a radio playwright but worked in other media as well.) And we are painfully in need of a collection of David Redd's fiction.


(And given recent events, we might also consider the short fiction of the late Carmine Infantino [a story in the first Ariel] and Roger Ebert [a short story each in Fantastic and Amazing]...and perhaps look to the various collections of Basil Copper...)

But another, who sparked this thought, was the acerbic John D. Keefauver, who contributed regularly to the Pan Book of Horror Stories series, and later with stories in the National Review often anthologized by Harold Q. Masur in Alfred Hitchcock Presents: anthologies (and later still I believe had at least one item in National Lampoon)...whose only published book, afaik, is this sexploitation item (apparently, at least) from 1961: 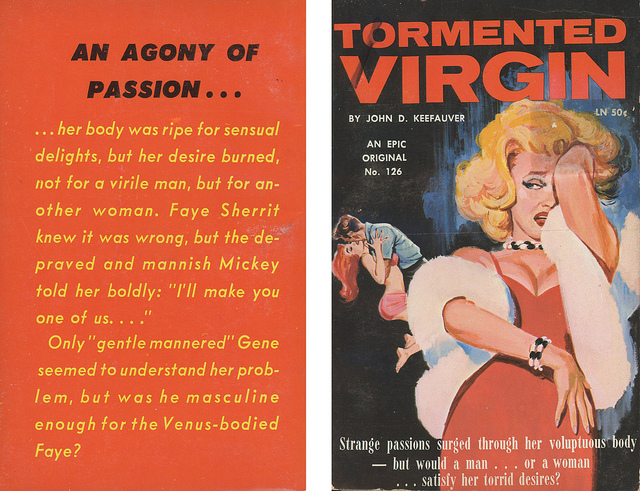 Nelson is a good choice. He was also a writing teacher of Anne Rice before she published Interview With a Vampire.

Another one whose work I would like to see collected is Vance Aandahl. He wrote a number of pretty nifty stories in the 60s for F&SF, Playboy, etc.

Although he has had several collections published, the late Jack Ritchie certainly deserves to come back in print.

Rice studied with Nelson, as well as Sturgeon? Wow. Remarkable how she learned so little...(and, of course, has sold so much better than either of the men).

Aandahl did do some interesting work, and I'm certainly a Ritchie fan.

Jonathan Craig's (aka Frank E Smith) short fiction has appeared singly in a variety of Alfred Hitchcock anthologies. I am hoping with a project I am involved with all those stories may soon be in one volume. Same goes for Ed Lacy.

Remarkable...I definitely wouldn't've guessed there never has been a Lacy volume. Craig's a fine candidate, as well.

Wow. Given her sales, one would have to wonder if Tyler was actively fighting having a short story collection published...rather the way Gary Jennings only published the one collection of linked short stories under a pseud, and never tried to get any of his other (often better) short work collected at all, as far as I know...nor have his heirs...

I'M DYING HERE, a great title for a book about a stand-up comic. If Oz crime fiction has a chance in the US market, it probably needs to out-grim those Norwegians and Swedish writers. Someone like a David Michôd who wrote the screenplay for ANIMAL KINGDOM.

They figured (Broderick and Barnes) that it was the closest they could come in the local dialect to what they were reaching for in the original title...

Well, certainly ANIMAL KINGDOM, the film X (which I reviewed here last year), ROMPER STOMPER and some others have been mining ultrablack comedy/noir veins...I don't know to what extent Oz cf has followed suit.

Robert Abernathy wrote some good stories; I wouldn't mind seeing a collection of his stories.

I don't think anyone has done one of Howard Browne.

John Blackburn, a solid British thriller writer, has at least six stories out there; I don't know if that's enough to make a full volume, though.

Chapbooks are always fine, though. Browne and Abernathy might well have enough to make a decent full book...wonder how many Browne stories were in MAMMOTH MYSTERY and MAMMOTH DETECTIVE...

I am currently editing a collection of Keefauver's stories on behalf of his estate for Lethe Press, to be followed by a new edition of The Tormented Virgin, as well as some of his important unpublished work, including several novels. Contact me via FB or Twitter for more info.

Thanks, Scott...I'd heard tell somewhere of the collection, at least...