"Instant remainders" are books, usually but not always hardcovers with the text on low-grade paper, published by such discount (and often short-lived) imprints as these volumes' "Octopus Books" and "Galahad Books" (in their first editions at least), meant to be sold inexpensively in the remainder shelves of (usually) chain bookstores; it's a pretty raffish and catch-as-catch-can corner of the publishing business, which is a pity when they offer (often in multiple editions, sometimes with slight variations in content, with the titles often changing along with the imprint names) two volumes such as these, the Ferman brilliant, the Sullivan at very least interesting and useful. 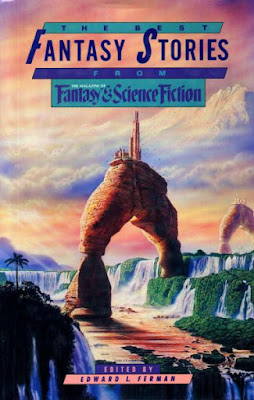 The Edward Ferman volume was the first sweeping anthology he or his predecessors had selected from The Magazine of Fantasy and Science Fiction, that wasn't sparked by an anniversary of the magazine per se, though perhaps it had been meant to be published a bit earlier, in the 1984 35th anniversary year of the magazine, which is still publishing today. It's an excellent slice through the fantasy and some of the more "off-trail" fiction (sometimes surreal, sometimes merely odd) F&SF had been willing to publish over those first half of its run so far, without these latter stories having any explicit fantasticated content. Examples of this tendency are Shirley Jackson's whimsical "One Ordinary Day, With Peanuts" or the bit of psychodrama that is "The Vanishing American" by Charles Beaumont, and arguably, at least, the most famous "first story" the magazine has published, "Born of Man and Woman" by Richard Matheson, or the antic "outback" missionary story by Gary Jennings, the first of his Crispin Mobey series of stories. A few others are more arguably science fiction, even when more satirical than not, such as Kurt Vonnegut's widely reprinted "Harrison Bergeron," or Walter Tevis's "Far from Home" (the title work of The Hustler and The Color of Money author's wonderful collection of his fantasy and sf short stories). The balance, however, are all but inarguably fantasy fiction as we usually think of the term, and include such good to brilliant work as Robert Bloch's fable, the first inarguable fantasy story to win the Hugo Award, Arthur Porges's clever joke vignette, Avram Davidson's first story published outside the Jewish press, a deftly allusive borderline horror story that displays its wit so offhandedly as to nearly slip the nature of the magic at work past the reader, and R. A. Lafferty's typically audacious tall tale. More explicitly horror fiction ranges from Fritz Leiber's rather gentle "Four Ghosts in Hamlet" through the nostalgia and angst of Harlan Ellison's award-winner "Jeffty is Five," from the witty psychic investigation by Ron Goulart's Max Kearney (still my favorite series of stories I've read from Goulart) to haunting vampire stories by the young Joanna Russ (her first story she seemed very happy with) and the past-master, by time of writing and publishing "Pages from a Young Girl's Journal," Robert Aickman. Such stalwarts of F&SF as Bob Leman, Russell Kirk, Jane Yolen, Alfred Bester, Theodore Sturgeon, Kim Stanley Robinson, Robert Sheckley, Damon Knight, Thomas Disch and Jack Vance have stories joined by work from such more occasional visitors as Jack Finney, John Collier, J. G. Ballard, Bruce Jay Friedman, Parke Godwin, Tom Reamy and Thomas Burnett Swann, the latter two having their careers and lives cut far too short. About the only, not quite minor but not crippling complaint I have about this selection is the relative lack of women contributors, given how many have done impressive work for F&SF over the decades...in the fantasy volume, at very least Phyllis Eisenstein should have a story, and Lisa Tuttle; Carol Emshwiller had had at least borderline fantasy enough published there, as had Kate Wilhelm, while Kit Reed had gone well beyond borderlines thus. I've never thoroughly enjoyed Sterling Lanier's club stories, so might well've dispensed with that one if I had been the editor...though they apparently were a popular recurring feature in the magazine. Stephen King's F&SF work has also often been dispensable, if certainly providing an appeal to the casual reader. Really just a fine collection that shouldn't've slipped away from less casual publishers, as no F&SF anthology had done before nor has since. It deserves better than two (only) rather middling-packaged discount editions (the latter somewhat more succinctly if slightly less defensibly called simply Great Tales of Fantasy and Science Fiction)...though at least copies of both editions are reasonably priced in the usual secondhand markets (please consider, if ordering through Amazon, using the "button" at the bottom of the page, which adds no cost to your purchase, but provides a small finder's fee for this blog from each order...thanks.) 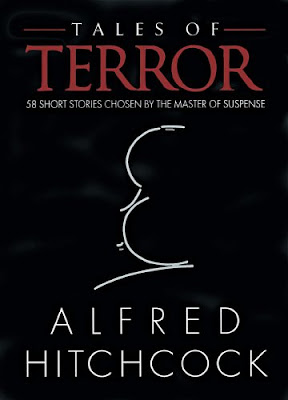 The "Hitchcock" volume, attributed shamelessly in various editions' packaging to the several years deceased Hitchcock (by time of first publication), was instead the work of Alfred Hitchcock's Mystery Magazine, and stablemate Ellery Queen's MM, (now also late) editor Eleanor Sullivan; their magazines continue to publish, as well; several publishers and decades ago, EQMM and F&SF had both been founded as revenue-generating support for the less-reliably popular mostly-political and critical magazine American Mercury (AM's predecessor magazine, The Smart Set, had been similarly helped along when editors H.L. Mencken and George Jean Nathan had also founded the major crime-fiction pulp Black Mask...they sold BM to another publisher rather quickly, though not before two new writers, Dashiell Hammett and Cornell Woolrich, had tried contributing to both, joining the likes of F. Scott Fitzgerald and Eugene O'Neill in the one and Paul Cain and Horace McCoy at the other. James M. Cain would write for the Mercury after it started, while also growing increasingly annoyed with his editorial job on the staff of The New Yorker). Tales of Terror is apparently also the second volume from the AHMM staff to be an instant remainder offer (Galahad Books, I belatedly discover, had issued the similar The Best of Mystery first in 1980, albeit that one was edited by Harold Q. Masur, of whom more below), and has seen several editions sporadically up to the present...it adds to the confusion around anthologies attributed to Alfred Hitchcock in at least two manners, as one of the series of hardcover anthologies taken (in this case mostly) from the magazine (when previously to 1977, the anthologies from the magazine had only appeared in Dell paperbacks, while Dell also did the paperback editions of Alfred Hitchcock Presents: anthologies originally published by Random House in hardcover, and originally edited by Robert Arthur from their beginning in 1956 up through Arthur's early death in 1969; Harold Q. Masur would edit AHP: books from then till 1980 and Hitchcock's death. In 1977, AHMM's new publisher, Davis Publications, began offering Alfred Hitchcock Anthology, a fat semi-annual  reprint magazine similar to the longstanding Davis Ellery Queen's Anthology...Dell's hardcover arm, the Dial Press, did hardcover editions of the anthologies simultaneously with the magazine issues, mostly for the library market one assumes. (Then there are the YA anthologies and the Three Investigators series of YA novels, initially also Arthur's work.) A slightly less complex confusion also can arise from one of the contributions to Tales of Terror, a 1953 story attributed to Pauline C. Smith, which was presumably one of the relatively few reprints published over the years in AHMM...this Smith being one of Robert Arthur's pseudonyms, the one under which he'd ghost-edited the first AHP: volume in '56...but another writer, actually named Pauline C. Smith, began contributing to AHMM and other crime-fiction magazines in the late '60s and continued into the 1980s, so confusion between those two can arise easily as well. Meanwhile, the casualness with which instant remainders are often treated with by library catalogers and indexers is much in evidence here, as many different online sources carefully replicate the error that Robert Bloch's fine suspense story "A Home Away from Home" is by Barry N. Malzberg...while not mentioning Barry's actual contribution to the book, the somewhat relevantly titled "After the Unfortunate Accident".  Tales of Terror is something of a misnomer, as many of the same online reviewers will tell you, as most of the stories are suspense or even relatively straightforward mystery stories, some lighthearted...it isn't as brilliant a representation of AHMM as the other book is of its magazine, but it's another good cross-section and core sampling, and offers work by a number of the same writers, such as Bloch, Arthur Porges and Ron Goulart.

Tales of Terror: 58 Short Stories Chosen by the Master of Suspense [sic]

Both books will reward your attention, and deserve at least some more serious attention from critical historians and bibliographers.

Thanks for this post, Todd. I buy every Dell AH anthology I can find.

I will definitely be using the Amazon button for the fantasy collection - thanks for that, does seem amazing to print deliberately for remainder stores. I think I always knew it happened but never really thought about it (sic).

Well, there are some temporary remainder store sites in the US (and on FaceBook, Brian Arnold recalled that Encore Books started as a chain of permanently placed remainder stores), but most remainders in the US are sold through full-service bookstores and, increasingly, though the likes of supermarkets and and other broad-spectrum retailers. The biggest instant remainder publisher these days, over here at least, is Barnes & Noble itself, if I'm not mistaken. And, thanks, gents!

Elgin--look out...they retitled a few of them over the years (if you're basically collecting them to read).

I own the TALES OF TERROR collection but I haven't gotten around to reading it yet. I've never seen THE BEST FANTASY STORIES FORM THE MAGAZINE OF FANTASY AND SCIENCE FICTION so I'll have to track down a copy. Looks good!

It really does compare favorably with any of the other long-term retrospectives of F&SF and is, because of its publishers, rather obscure in comparison. I'd say the AHMM isn't the best retrospective of AHMM but it's better than good, and while better-distributed still hasn't gotten the treatment it deserves. Packaging hasn't helped with the Sullivan.

Ferman (along with Anne Jordan) also edited THE BEST HORROR STORIES FROM THE MAGAZINE OF FANTASY & SCIENCE FICTION for St. Martin's in 1988. Although not as good (or as thick) as the fantasy volume, there was a ton of great stuff in it by the likes of Lucius Shepard, Michael Shea, Robert Aickman, Charles Beaumont and Tom Reamy. Women were again underrepresented, but the book did have stories by Patricia Ferrara, Pamela Sargent and Lisa Tuttle's "Bug House", which may well be my favorite horror story of its era, though it seems to be less well-remembered than contemporaneous stories by the likes of Barker, King, etc.

Yes, Chris, I've had a copy of BEST HORROR FROM F&SF since it was relatively new...but since this earlier one was published only as a remainder, it took me a while to relatively recently discover its existence...and I'd agree that is is the better book, in part because this one isn't afraid to mix chestnuts with some relative rarities (it seems almost as if they went out of their way to ignore some of the actually best horror in the magazine's backfiles with the later anthology). Anne Jordan had an interesting career. (The spell-checker tried to anticipate my distracted pause and offered "carpet"...something a gentleman should refrain from discussing outside one's tryst. I see it also, without my noting it at first, decided "backfiles" should be "backfield"--clearly, Apple is hoping to get me to turn to one of their dating apps tout suite)) Tuttle is certainly still a big deal among those who actually know fantastic fiction, much as is, say, Dennis Etchison, but neither of them have had the kind of galumphing success that puts them to the front of the memory of causal readers of horror, alas.

...and then for the first paperback edition, St. Martin's pulled a Dell and broke the anthology into two volumes...with a new intro by Ferman in V. 2 to require completists to have that one, at least...