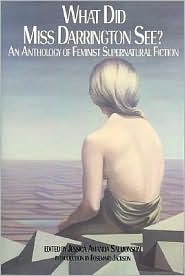 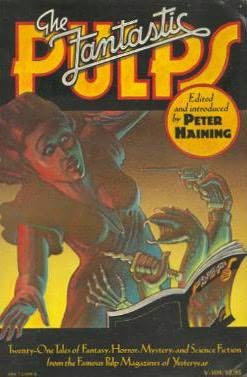 Two important survey anthologies in my reading, encountered about a decade apart; I would've caught up with the Haining, with its then mildly steep (to me on an allowance) price of $3 (or was it up to $5?) in its "quality paperback" digest-sized form, in 1978, and I picked up the Salmonson at time of publication. Both books good fun to read, the Salmonson averaging better in quality (Haining's anthologies through the decades were often more fun even when not greater than the sum of their parts, and the selection is certainly reasonably representative), but both useful surveys that introduced me to writers I was unlikely to stumble across quickly otherwise (such as Kantor or Quinn, in the Haining, though I had read about Quinn in Les Daniels's history of horror in literature and other arts, Living in Fear).

Perhaps as important as the fiction, in both cases, were the best essays in either book; Rosemary Jackson's introduction to the Salmonson was, by design or happy circumstance, a persuasive counter-argument to Stephen King's rather daft and widely, thoughtlessly assented-to notion, put forth in Danse Macabre, that horror fiction is inherently a politically reactionary form; she deftly demonstrates horror's history and natural utility as radical and progressive critique, not least in pointing out the horrors in society which need to be overcome. In the Haining, he reprints Charles Beaumont's fine essay "The Bloody Pulps" (from an early '60s Playboy), which while not accurate in every detail is a fine, nostalgic gloss on the joys of the pulps of CB's youth...amusing to hear his voice from 1962 sneer just a bit about the slight thing a 1962 Argosy or Amazing: Fact and Science Fiction were compared to what one got in, say, 1946...Argosy by the early '60s had already become a sort of down-market, if slick, Esquire, rather than the leading general-interest/eclectic fiction pulp it had been in the 1940s (and its British edition already a sedate and even more literarily impressive digest), but this contrast between the slim, adventurous digest-sized Amazing, edited by Cele Goldsmith and featuring some of the best fiction in the field, versus the Ray Palmer Amazing Stories of the '40s with some good and a lot of indifferent to bad adventure sf, and a tendency by the end of the '40s to wallow in fringe crackpottery (even as John W. Campbell over at Astounding was becoming increasingly willing to do, as well, in his more intellectualized way), is not a terribly strong argument. Except in nostalgic terms, perhaps. (And Amazing's then-recent mockery of Playboy, in a joke story by Isaac Asimov, perhaps had not gone unnoticed in the Mansion.)

The fiction in both volumes ranges from impressive to readable, with, as noted, the advantage going to the Salmonson, even given the historical importance of nearly everyone in both books (though, obviously, some of the Salmonson picks have become even more obscure over the decades than some of the once-famous and still indirectly influential fictioneers in the Haining); the works by still-major folks in the Haining, ranging from London and Lewis through C. L. Moore and Hammett to Bloch and Bradbury, are represented by stories more rare than representative of what they were capable of, which is less true even of the modern writers in the Salmonson, even as she avoids some obvious choices (and includes such nice surprises as Anne Sexton's prose vignette). A nice bonus in the Haining is a portfolio of pulp illustration, including Damon Knight's work, from before he turned his primary attention to writing, for the Weird Tales publication of the Lovecraft "Herbert West, Reanimator" stories.

The Haining was never too fortunate in cover imagery, but the hardcover has a slightly better cover, a pulp illustration reprint rather than a pastiche (and Haining's later anthology, with actual covers from his collection excerpted on the cover, not surprisingly looks better yet:) 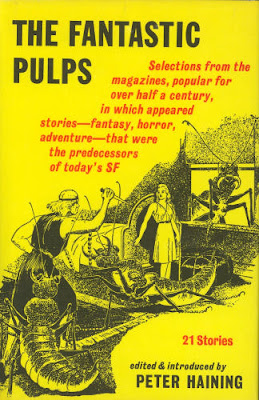 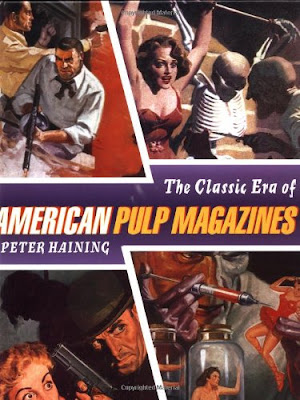 Survey collections like these have become more scarce. Otto Penzler seems to be the lone anthologist (with his BIG BOOK series) with this kind of scope.

Gardner Dozois gets some out into the commercial market, too, and the BEST AMERICAN people are always willing to expand their brand...but it's notable that Salmonson placed hers with the Feminist Press (which has the added advantage of having kept the book in print)...

I was surprised by Houghton Mifflin's THE BEST AMERICAN ESSAYS: 2009 volume. It was about half the size of a normal volume. I wonder how long publishers are going to support such quality--but marginally profitable--series.

The HMCo. series are generally doing well, as far as I can tell, or else they probably wouldn't be adding the BEST AMERICAN ____ OF THE CENTURY volumes I refer to...it's Doubleday that has been somehow losing money on their O. HENRY series for years (since they only have the one series and not eight).

E-books will just make this that much easier to publish, I'm sure...

Particularly if their format and network works more reliably than Blogspot is Again.

You've trumped me, I had FANTASTIC PULPS, along with THE SHUDDER PULPS as a double feature for FFB one of these days. Have only gotten as far as scanning the covers, though. I may still do it, but need to review the books a bit more before doing a write-up. Or I'll just link to yours...

The cover on DARRINGTON is wonderfully abstract.

I'd look forward to your take on THE FANTASTIC PULPS with or w/o THE SHUDDER PULPS...the latter I've never gotten around to picking up. It's pretty appropriate, the DARRINGTON cover, to that story as well as the book...

No FFB next week, at least by me, and I already have one ready for the following week, so who knows when it will be.

All good things...at least, I hope whatever is happening this week is a good thing. (And, as usual, I'm impressed by anyone who has both the discipline and the time to plan their FFBs in advance.)