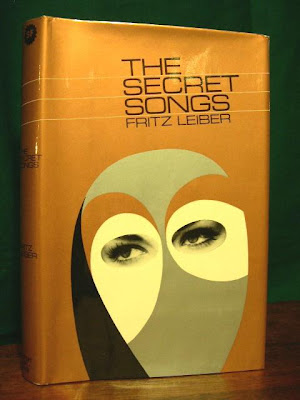 However, either way, this is a book of mostly brilliant stories by Fritz Leiber, not all the short stories he wrote which changed the way horror, sf, and fantasy fiction were written in his wake, but a fair sampling of those. And two of the three very autobiographical stories, in dramatic form (actual playlets) which are not sf, fantasy or horror per se, though they deal with tropes from those forms, since they are about Fritz Leiber's life..."The Secret Songs" is mostly about his and his wife Jonquil's addictions, his to downers including alcohol, hers to the commonly available uppers of the time, including over the counter speed. "The Winter Flies," which for some reason Edward Ferman at F&SF retitled "The Inner Circles," is about the Leibers at home with their son, Justin, but mostly about Leiber wrestling with his existential terror. "237 Talking Statues, Etc." is the missing one, about Leiber's relation with his mother and particularly his father, Fritz Leiber, Sr., and both the parents professional actors...Senior, for example, has a key role in the film The Spanish Main, while Junior, who pursued an acting career for a while, has a smaller key role in Camille (the Greta Garbo version).

While it's ridiculous that no Leiber collection so far has put those three plays together, this book helps redress this for its reader, at least, by also including such, it's hard to overstate, epochal stories as "Smoke Ghost" and "Coming Attraction." These are among the stories that Leiber used to demonstrate how little thought too many of his contemporaries were bringing to the fantastic-fiction field, and how obvious that seemed after these stories were published. The latter, a science fiction story which suggested that people really didn't necessarily behave in the ways you might want them to or that they led you to believe they did, and that your "heroism" might just be playing into their little fantasy-games, seems so obvious in retrospect...but was a corrective to entirely too much lazy thinking in the field at the time. As well as being pretty savagely satirical in at least two ways when most of the best fantasticated satire depended on the mostly-"outsider" crew of the likes of Huxley or Orwell...Leiber demonstrated that he was in their league, which he would continue to demonstrate (particularly with the "Change War" stories such as "No Great Magic" and the short novel, a play in prose, The Big Time), but never with more immediate impact. The effect wasn't unlike the cumulative effect of Dashiell Hammett's early short fiction in crime fiction.

"Smoke Ghost" simply created an approach to modern horror, much as Robert Bloch's fiction and that of some of the others in the little post-Lovecraftian knot flourishing in the 1940s did...Shirley Jackson, John Collier, to some extent Cornell Woolrich, certainly Algernon Blackwood and a slew of others were incorporating the advances of the Edwardians (E. F. Benson, Saki, et al.) and the honing of existential terror Lovecraft had taken up (and to some extent his peers, including the young Leiber and Bloch) from the thread HPL traced in Poe and his heirs. But few stories are so blatantly an example of an introduction of a new paradigm as "Smoke Ghost." Stephen Crane's "The Open Boat," perhaps. And even as "Smoke Ghost" recast how the supernatural might be dealt with in the modern urban environment, "The Girl with the Hungry Eyes" helped redefine vampirism, to get past the concretized metaphor that the spilling of blood, or any other body fluid, represented, to get at the elan vital aspect of the predation...and how mass culture might be such a predator's natural tool.

And then there are other simply brilliant stories, less influential but no less a joy to read..."A Pail of Air" (about coping with life on an Earth without the Sun), "Rump-Titty-Titty-Tum-TAH-Tee" (connected to the pathbreaking novel Conjure Wife, but not dependent upon it, a dancing bit of wit with the more sinister implications buried deep inside), and such.

This collection was never published in Leiber's native United States. Other slim collections nearly as good were. There's never been a sufficiently representative collection of his work published. He's not alone in this, but it's particularly ridiculous in his case. At the time of his death, he had more major awards for fantastic-fiction writing than any other person...Algis Budrys was genuinely angry, as well as resigned to the answer, when demanding in 1978 as to where was Leiber's National Book Award, his Pulitzer.

Where is Borges's Nobel? Awards, like justice, are only sparingly applied correctly.

Every time I see mention of Leiber, or read a review like this one, Todd, I think "must read some Leiber". I just shelved two hardcover collections and have four - or is it five? - Mouser collections in paperback downstairs in the library, so there's no excuse.

What I am going to do is check this TOC against those two collections to see what/how many are present. A good task, not too strenuous, for a (sunny!) Friday afternoon.

Well, whoever put this one together (I wouldn't be surprised if it was Judith Merril, given she writes the afterword, and was one of Leiber's biggest fans in literary and personal terms) was clearly aiming at a portable best-of in all but name. Though it avoids including any of the F&GM stories.

If you have the big books that have attempted to represent Leiber, such as the 1970s BEST OF or the relatively recent CHRONICLES, you'll have most of these stories. I'm not sure you wouldn't be just as well served picking up your copy of SWORDS AND DEVLITRY, which is the first of the books of F&GM in internal chronology (their origin and meeting stories), but if you reconstruct most of the contents of this collection, you'll certainly have a sense of Leiber's range as well as his brilliance.

I must admit I'm croggled, to say the least, that you've been reading in the field since the 1950s and resisted so far! I suspect you have a good time ahead of you.

Oh, I've read all of the Fahad and Mouser books several times each, and a few other things, I meant "time to read some MORE Leiber"

I also remember Harlan Ellison being pissed at Leiber's reception from the literary elite and at Leiber's poor financial situation at the time, demanding "where's his goddamned Nobel?"

Leiber was certainly deserving of much more attention than the adulation of the SF community.

Indeed, or solely the adulation of the fantastic-fiction community, Jerry. He wrote beyond the fields, and he has influenced most of the best writers ever to work in the fields after him...as well as notably bettering what he took from such influential contemporaries as Lovecraft and Robert Heinlein.

Glad to have misunderstood you, Rick!

Just to be clear, it wasn't that Leiber was disregarded by well-financed literary circles...like Vonnegut before the mid-'60s and Sturgeon, he was simply invisible to those who didn't know or care to know about the art of fantastic fiction.

Todd, thank you for your comment on my blog. I mean to reciprocate. I always mean to comment on your blog but rarely (if ever) do because I am too intimidated by your conversation which often consists of authors and books I'm not at all familiar with.

I don't know why that should make me feel slightly inferior, but it does.
(I mean, I can't be expected to have read EVERYTHING and/or to know everything there is to know about books and genres and whatnot.)

Still, I'm commenting to let you know that I do read your posts even if, sometimes, they are so esoteric that I simply do not know what to say about them. :)

Well, you're quite welcome, and thanks for looking in here and commenting, and I hope that when I'm dealing with unfamiliar matters, I make them sound inviting and worth looking into when I find them thus...hope I don't sound too dogmatic too much of the time! And no, please never feel inferior...if I'm showing you something of interest, particularly something you haven't heard about before, they we've both succeeded!

I wish NESFA or the Haffner Press would bring out an edition of Fritz Leiber's short fiction and novels. Despite winning Hugos, most readers only know Leiber from the Mouser series.

Thanks, Evan and Scott. George, the Leiber estate's agent is not necessarily the easiest to work with, as I discovered first-hand years ago, and his career-retro of Leiber's short fiction, THE LEIBER CHRONICLES, was years late and underwhelming. That might be a factor.