Tuesday's Overlooked Films and/or Other A/V: a few more links, including to comedy podcasts... 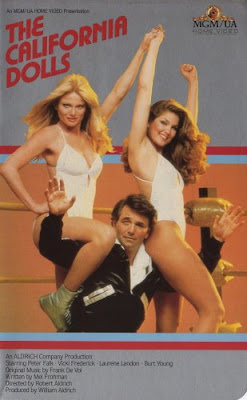 Chuck Esola: All the Marbles

Randy Johnson: Creature from the Haunted Sea; The Phantom from 10,000 Leagues

Yvette Banek: One Touch of Venus

Vince Keenan: The Hunted; Strangers in the Night; The Devil Thumbs a Ride

...and here's an update of a previous post from me:
BBC Radio 4's Comedy page...access to (at least this week's set of) BBC audio sketch shows and sitcoms. BBC Radio 7 has been mostly replaced by BBC Radio 4 Extra, which also takes some repeats from 4 and adds some more material.

Comedy and Everything Else, Jimmy Dore and Stef Zamarano's podcast (which sometimes cross-riffs with Dore's Pacifica Radio series, audible via Jimmy Dore Comedy), notable for a pronounced though very much not doctrinaire leftist stance, and a lot of good food (people are eating a little less on mic these days).

The former Comedy Death Ray Radio, now Comedy Bang Bang, Scott Aukerman's interview, sketch and music showcase...and now the anchor of a group of podcasts. A more elaborate showcases for improv parody-character sketches than most of the podcasts noted here, which often are the funniest bits. In fact, an episode in which Jimmy Pardo and his regulars filled in as hosts, and featuring an extended improv by Maria Bamford and Paul Gilmartin and music from the charming Garfunkel & Oates, might still be my favorite. Also on the Earwolf pages is the Sklar Brothers' sports and comedy podcast Sklarbro Country is also charming, if a bit literally too inside baseball, etc., to sustain my attention as readily; however, Howard Kremer and Kulap Vilaysack's Who Charted? is among the most charming and relaxed, as well as funny, podcasts you're likely to encounter, wherein a guest is brought on to interact with items from the Most Popular/Bestselling lists in various sorts of pop culture and related matters. The pun-laden, somewhat Nick Dangeresque Mike Detective, with Rob Heubel and Grey DeLisle, is archived here, and a variety of other new and ongoing series can be accessed and heard, including one, The Wolf Den, which is about the business of podcasting rather than a comedy show per se.

Dork Forest Radio, Jackie Kashian's formerly lo-fi podcast (on lo-fi BlogTalkRadio) is a charming delving into all kinds of geekery, or what Kashian dubs the Dork Forest. (See also, The Nerdist) Uniquely among these podcasts, when on BlogTalk Radio, there was a live chatroom running alongside the live podcast...Kashian is trying to decide what she'll do about that with the new, undistorted-audio format. Kashian is also probably the most gracious of podcast hosts, though unafraid of asking, usually politely and/or self-deprecatingly, hard questions.

Doug Loves Movies, Doug Benson's gameshow/interview podcast, the game usually all about trying to guess a movie title with as few clues as possible from Leonard Maltin's film-guides. Benson also usually has a few words to say about recent viewing experiences, and the guests are usually a mix of comedians, actors (Elisabeth Shue confirmed your suspicions about Paul Verhoeven), and occasionally Leonard Maltin.

Harry Shearer's Le Show sometimes is dismissed or criticizaed out of hand by folks on some of the podcasts...podcasts that probably wouldn't've existed without the loooong-standing example of Shearer's mix of music, monolog, and sketches (almost always one-person productions in which Shearer does all the voices). Shearer's wife, the excellent jazz-pop singer Judith Owen, is often heard in the musical segments.

The Long Shot, an established but perhaps still underappreciated podcast featuring the disparate quartet of comedians Eddie Pepitone, Sean Conroy, Jamie Flam, and Amber Kenny, who amusingly, acerbically chat, do audio sketches, and feature guests...so disparate that guest Tig Notaro asked them, "How do you all even know each other?"

The Mental Illness Happy Hour, Paul Gilmartin's relatively new interview program, has now fixed its RSS feed, and is an earnest, but not completely grim by any means, listening experience...the iTunes link is in for those who do Apple.

The Nerdist podcast, a key component of the larger Nerdist.com, features a crew spearheaded by Chris Hardwick, whose credits run from standup to cohosting Wired Science on PBS; he's most regularly visible on G4, and he and his partners, or he alone, interview a range of guests only slightly less wide-ranging than Jackie Kashian (see The Dork Forest). Hardwick in one episode railed against those who criticize him for kissing his guests' asses, correctly noting that what could be cynically (if unsurprisingly) misconstrued thus is his genuine enthusiasm for speaking with the guests, riffing cheerfully, and generally trying to share his passions. A video version of this series will begin on cable channel BBC America soon.

Never Not Funny, Jimmy Pardo's podcast, usually featuring Matt Belknap, the proprietor of A Special Thing, and one of the oldest of the continuing series (with Kashian's Dork Forest). The link is to the free feed, as NNF offers a free first twenty or so minutes as an enticement, then offers the rest of a given episode only to paying subscribers...Pardo's mock aggression, almost always immediately self-deflated, mixes well with his energetic, slightly retro persona.

The Pod F. Tomcast, Paul F. Tompkins's elaborate performance and interview podcast, is as distinctive as his performances tend to be.

Pop My Culture is duo of young actor/comedians, Vanessa Ragland and Cole Stratton, doing interviews and related matter with an an eclectic set of performers and others in and around, well, pop culture, usually at the comedic end...

The Smartest Man in the World, Greg Proops's nightclub-based podcast, appears irregularly, and can be somewhat in and out...but is always worth the listen.

The Sound of Young America, etc.: MaximumFun.org gets one podcasts of TSOYA elements and also the more informal and uncensored Jordan, Jesse, Go! among other bits and pieces, including the Canadian Stop Podcasting Yourself and the college-station years of TSOYA, and archival bits from San Francisco legends Mal Sharpe and James Coyle. Colin Marshall's text reviews of podcasts are wide-ranging and thoughtful, as well as frequently funny.

Wait, Wait, Don't Tell Me..., NPR's primary humor series (unless we consider Car Talk also primarily a humor series), remains a pleasant and frequently hilarious news-quiz game show, with comedians and writers competing for meaningless points, and guests competing on behalf of audience members. The comparable PRI series Whad'Ya Know?, features a somewhat more rambling style and fewer guests in the gameshow seqments, though also features a fine jazz combo. CBC's comedy and whimsy series Wiretap also gets a fair amount of clearance in the States...and averages perhaps a bit better in that wise than such more popular US series A Prairie Home Companion or This American Life. I'll put in a plug here for the not quite primarily humorous series On the Media and pop-science series RadioLab. Just a notch below these is Studio 360.

Weezy and the Swish is the only "dead" podcast that I list here (at least so far), Louise Palanker and Laura Swisher's project, one of the earlier comedian podcasts, and still one of the few not hosted mostly and entirely by Caucasian men. A smattering of their episodes archived here.

WTF, the Marc Maron podcast, one of the most attention-getting as Maron probes himself and his guests usually a bit more relentlessly, yet for the most part professionally (Maron's experience on Air America and with BreakRoom Live tells) than most of his peers. A mixture of usually one-on-one interviews interspersed with a sporadic set of talk-show-style multi-guest live episodes, both eminently worth catching. Public radio stations will have access to a short series extracted from this series, from PRX, the Public Radio Exchange (not to be confused with PRI, PRX is the rising distributor which was kind enough to take on Sound Opinions, the inept Chicago-based rock music-discussion series which PRI dropped, along with such better work as The Moth).

If you want me to send this to you by email, let me know.

Now I'm off to see what everyone else's posts.

For all of us TV fans, July 1st will be an important date. It will be commercial television's 70th birthday.

There is a "party" over at the Paley Center website.