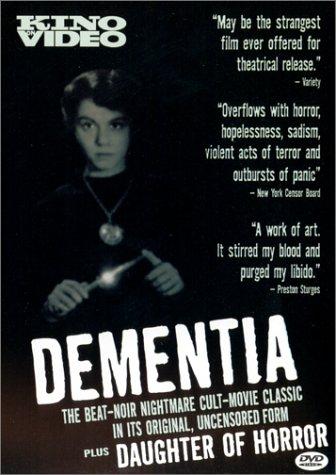 Much delayed, but my it's been even more of rollercoaster of late than usually. From work demands to food poisoning, life's rich pageant can be a bit too rich at times.

Sons & Daughters was one of the best sitcoms ever strangled in its crib; a partially improvised half hour on ABC (which has been in a race with Fox over the last decade or so to see how many actually good series they could commission and quickly cancel while carefully nurturing as much offal as possible), it featured the kind of dysfunctional extended family that it took the collective overrating of Arrested Development and the eventual dumbing-down to the level of Modern Family to make a success...when with a little support, ABC might've had the hit, or at least a solid supporting player, years back, with an impressive ensemble cast led by Fred Goss and Gillian Vigman, and not quite adequately represented below, but this gets across a sense of the quality of the show and range of characters:

10 episodes aired on ABC...the Seven network in Australia aired all eleven that were made, and not a hint of DVD action so far... 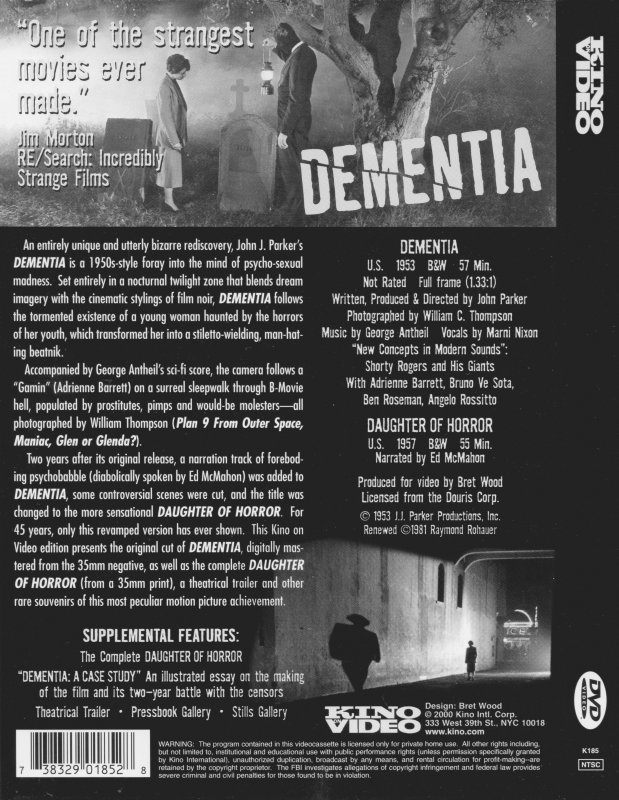 Bill Crider, in his posting of trailers that catch his eye, snagged that for Daughter of Horror a month or so back, and I'm glad he did, since this clearly no-budget obscurity from the '50s had completely gotten by me before, either under its proper title, Dementia, under which it was completed in 1953, or the 1956 distribution title, from Exploitation Pictures no less, under which it was circulated, with a fairly ridiculous, if happily sparse, narration track added by an enthusiastic Ed McMahon. The "real" film has no dialog, and while it has sound effects, they are most pretty clearly Foley effects added later...and what it does have is a soundtrack, and a fine one, by George Anthiel, as playfully avant-garde as anything he recorded for film (and not too dissimilar to his concert work) and featuring the wordless vocals of a young Marni Nixon, which makes room for a composition by Shorty Rogers and His Giants for "Wig Alley" in a brief sequence in a jazz club. It also has some excellent cinematography, for its budget, by William Thompson, who had a career almost exclusively in no-budget film, including work with Ed Wood and Dwain Esper...but even Vilmos Zsigmond started in the States with the likes of Ray Dennis Steckler. I've yet to see the slightly longer original cut, available on DVD from Kino, but Archive.org offers a good public-domain print of the slightly chopped version (below, and double-click for a full-screen image), which gives a sense of virtue made of necessity of this arty bit of work, involving the nightmarish, somewhat delusion-ridden night of a young woman in Los Angeles who might or might not have committed multiple murders. I'm going to have to pick up the Kino release...the inspiration of the likes of David Lynch by this film is almost certain.

My friend Tom Kraemer was somewhat surprised by the YouTubed version of this, since he hadn't come across the viral campaign Go the F*ck to Sleep (as it is coyly titled) had enjoyed over the last several months...Funny or Die, being professionals, actually paid for the right to post this from Audible.com (or so I assume), and so they have reader Samuel Jackson's little preface appended (you might not want to play this into the open air in uptight situations, such as many offices):


And Rick Robinson brought to my attention the compilation The Greatest Jazz Films Ever...which we agree hardly lives up to that boast, but does have a lot of impressive work on it, most of it from television performances (the least of the problems with its title)...I've seen almost all of these from other sources, and there is at least some complaint about the transcription quality of this disc, but if your can get it from a library (or, now, watch it online, in some countries or from "stateless" e-addresses)...you could do worse.
Posted by Todd Mason at 6/21/2011 10:30:00 AM

Todd: I hope you're feeling okay. Was it you that had the food poisoning? I've had it. It sucks to high heaven.

Don't remember the tv show you mentioned today. Was that like BROTHERS AND SISTERS? (Didn't like that show much.)
I never watch horror stuff so
I've never heard of any of the things you're talking about except for that 'childrens' book with the offensive title. Call me a prig but I'm not going to be rushing out any time soon to look at this book, nor will I read about it online. I mean, life's too short.

I congratulate the guy who came up with it (or gal) for being able to make a bunch of money on a one note idea.

Well, I hope you find your way out of the dumps, Yvette...and thanks, yes, it was me who'd fallen prey to something not so pleasant at a salad bar.

No, SONS & DAUGHTERS was very Very little like BROTHERS AND SISTERS, nor like the Australian soap with the same title more or less (S AND D rather than with the ampersand). Check the clips for a sense of the show, though the whole episodes would help more. I have No idea why this series has been kept off home video.

Well, DEMENTIA is at best borderline horror...people do compare it to THE CABINET OF CALIGARI and Luis Bunuel (though it isn't as good as the silent nor certainly the best of Bunuel's films) and REPULSION (also better), so you night think of it as on the edge of surrealism, suspense and horror. This is a minor but interesting (and perhaps even influential, given when it was made and perhaps even more how it was circulated) work in that area, with a very interesting musical score and some handsome cinematography.

Well, the "children's book" has struck a nerve because, of course, it's not for children at all, but just a bit of a joke for exasperated parents...getting them out of their own dumps. It's pretty short, too. I can't imagine buying it, myself, but I find it fitfully amusing. There are Much worse ideas, sadly, that have made much more money for more unsavory types...

But, hey, thanks for your contribution, as well. I've barely heard of your films, but have heard of them, and they sound interesting...I hadn't realized Latimer was working in film in the '50s, but I hadn't been following him too closely.

SONS AND DAUGHTERS featured Megan's great friend, Alison Quinn. We were so sorry to see it go so quickly.

I remembered that. It really deserved a better shot than it got. Given that Lorne Michaels was one of the producers, they should've shopped it hard to NBC.