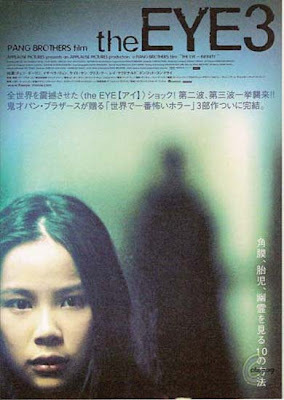 Asian Horror: The Pretty Good, the Pretty Bad, and the Confusing

My last few movies have been recent Asian horror releases, including 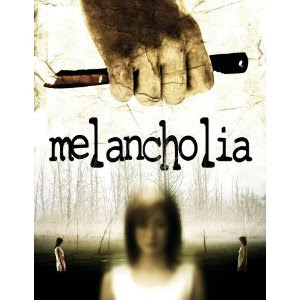 The Pretty Bad: Melancholia (2006), a Japanese film directed, well, pretty badly by Takaaki Ezura. This is basically a Japanese doppelganger movie that makes the unfortunate mistake of trying to explain the doppelganging scientifically, by way of cloning technology or some such. But, while unfortunate, this is not all that important, as the movie is beset by serious flaws in pacing and cinematography, flaws far more irritating than a botched attempt to rationalize the irrational. To try to capture some sense of life with a doppelganger, Ezura opts for numerous very annoying visual and aural repetitions. For reasons I can't even begin to fathom, Ezura also chooses a visual style that looks a lot like home camcorder naturalism (without any shaky hand-held "realism," but with most of the movie looking kind of like bad low-budget teevee). I made it all the way through this one, but was Facebooking at the same time, because I had to. 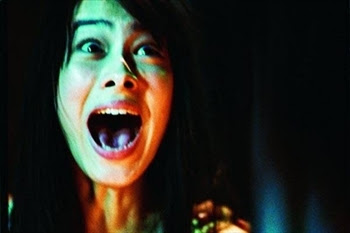 The Pretty Good: The Eye 3, aka Gin Gwai 10 or The Eye 10. My Netflick actually came with the right movie but the wrong jacket, as there's another movie out there called The Eye 3. The one I watched is a 2005 Pang Brothers release, much of which is set in Hong Kong, but with an interesting mix of Cantonese and Thai dialogue. I didn't expect a third sequel to be any good, but this one surprised me. So far as I can remember the first and second Eyes, #3 bears little or no family resemblance to its precursors. One of the clever things about it is that it uses a "Ten Ways to Raise a Ghost" book as its organizing principle -- so that it's kind of like an omnibus, but with a reasonably clear narrative through-line. This is not to say that I followed the storyline with complete success, but I quite liked this movie's energy, inventiveness, and even wit. It has probably the best, or one of the best, dance sequences I've ever seen in a horror movie. And it also actually made me that bit unsettled here and there -- success!! Between the creative energy and some unpredictable twists and turns, this one worked pretty well for me.

Finally, the Confusing: The last film I watched was the Korean version of The Uninvited (2003), directed by Su-yeon Lee. I liked this film's grimness -- if you want a film that's absolutely committed to downtrodden, much-chagrined and humiliated characters who suffer terrible setbacks and can't look each other in the eye, this is the film for you. One thing I love about Asian horror is its brilliant ability to evoke bleak and empty urban landscapes and to give us houses that are far too unsettled to be homes. Watching these films, I sometimes almost feel like I'm in a Korean Edward Hopper painting. The Uninvited nails this; visually, it's another really striking Asian horror film, with fabulously depressing and alienating cityscapes. But the plot! At some point about an hour or so in, I finally just gave up trying to follow along. The movie has enough going for it that you can actually get something out of it even while in an advanced state of confusion. (You know that the characters are downtrodden, for example.) That said, it was pretty hard for me to keep track of some of the players, and it seemed to me that a couple of seemingly important pieces of the story got set aside, or maybe something was lost in translation, or maybe I dropped the ball, or something. Anyway, I liked this one pretty well. But I don't really know what the hell it was about.

(Eric Anderson is a George Mason University English and American Studies professor and horror enthusiast, among the other hats he wears.)
Posted by Todd Mason at 6/21/2011 12:01:00 AM

I've got a Tuesday film review of The Life and Death of Colonel Blimp up, if you wouldn't mind including it:

Sorry about dropping this in the comments but I can't locate your email address.

Not a problem, Graham...that's what comments are for, in part! Thanks.

Eric, I note that when the Japanese peers want to get away without saying anything clearly, perversity and style seem to suffice. Just perversity if style is too hard. I think of such middlin' range stuff as ANGEL DUST...