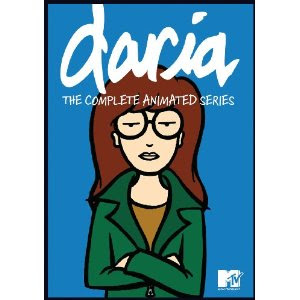 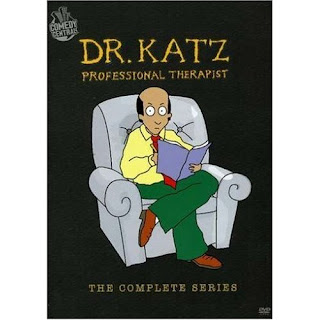 So, these, along with The Simpsons and scattered other bits here and there, were the most impressive sustained television animated series in the US in the 1990s, sitcoms featuring, respectively, a well-meaning but rather inadept psychologist (comedian Jonatan Katz) and his patients (an impressive array of standup commedians) and his friends, family, and receptionist Laura (Laura Silverman, late of the Sara Silverman Program) and an acerbic, disaffected intellectual teenager making her way in a typically bland and corrupt suburban high-school-dominated life, with the help of her bohemian artist best friend and occasionally that of her family, who all have their own crises and agendas to deal with, and infrequently her teachers and classmates.

Katz was the first major project from animator (not the talk-show host) Tom Snyder's "Squigglevision" company, which went on to offer the nearly as amusing Science Court and Home Movies series. A fine heir to The Bob Newhart Show in one way and in another a showcase for a lot of the best comedians of the latter '90s, who could do parts of their typical acts as complaints to Katz as their therapist, this ran from 1995-99 on Comedy Central cable...and is collected here with some interesting commentary, a few other extras (including a 2007 stage revival stunt featuring Katz, Silverman, H. John Benjamin reprising his role as Katz's son Ben, and Kathy Griffin, Maria Bamford, Andy Kindler and Paul F. Tompkins as patients...not a completely successful revival, as Katz seems a bit at sea [and since he's sporting a cane, might be so because he's feeling some serious chronic pain...elsewhere in commentary he refers to leg pain), and the other comedians all seem a bit overeager to compensate for that, including one blowing off a improv suggestion Katz makes altogether). The series is never worse than pleasant and is frequently casually brilliant.

Daria Morgendorfer was a character introduced in Mike Judge's Beavis and Butthead cartoons, a girl the goonish boys lusted after who in her turn found them fitfully if grotesquely amusing; the Daria series has no further input from the Judge characters, and in fact begins with the Morgandorfers relocating to the nondescript suburb of Lawndale (at about the same time that Buffy the Vampire Slayer was moving into Sunnydale); there's no lack of satiric targets for Daria and quickly acquired soulmate/best friend Jane to mock, including occasionally each other (Jane is more in touch with her physicality than Daria is, and Daria a bit more self-righteous, which are not always but can be the starting points for what ribbing they give each other, particularly as Daria quickly developes a crush on Jane's slacker rock-musician brother Trent). Easily and by far the best regularly-scheduled program in the history of MTV, 1997-2001 (as much as any program has ever been regularly scheduled on MTV, and given such rare but occasionally impressive competition as Austin Stories and The State), Daria like most MTV programs took advantage of the music rights the channel had to slather its soundtrack with current pop, which has now been denuded WKRP in Cincinatti-style for home video...it hurts less than with WKRP, because the music was usually more incidental to Daria, albeit it guts the REM "Everybody Hurts" video parody in an episode largely devoted to an ill-fated attempt to attend Lollapalooza (here given a parodic name). And the series-original music of Trent's band, and of the "Daria! The Musical" is retained...small favors, at least. The two feature-length telefilms, Is It Fall Yet? and Is It College Yet? are among the "extras"...though relatively skimpy coverage is given to behind the scenes.

I'm certainly enjoying them to overindulgence. Particularly the episodes I've missed (no few in both cases).
Posted by Todd Mason at 5/29/2010 06:20:00 PM

I saw Katz on The Tonight Show back in the day talking about the show. A line that made me laugh out loud: "We do the animation right here in America. Ironically, we do the voices in Korea."

Ha! Initially, they did everything out of Tom Snyder's house, much to the amusement of the first-season comedians who'd come in to record.

Also, the close quarters there did nothing to make certain awkward situations better, apparently...Laura Silverman and H. John Benjamin apparently had just broken up before taking on their roles on DR. KATZ (inasmuch as Laura finds Ben utterly annoying, and Ben finds Laura fascinating to the point of all but stalking her, this was probably Used by them in performance), and producer-performers Julianne Shapiro and Katz played friendly characters but apparently were anti-close in actuality.

Thanks for the run down re: Katz and Daria. It is upsetting that the original music wasn't there, therefore, it wouldn't be nearly as nostalgic. I know it's wrong, but I'm in the process of finding a bootleg version of all the uncut MTV (NOT noggin) with the original music, it's just not the same without it.

I still don't get why you love Spitboy so much! The band punctured my ear drums a couple of times!

I think you'll be surprised how little difference the absense of the music makes, though it remains a sad commentary...it probably helps that I wasn't too interested in most of the music MTV was interested in licensing in the '90s.

And I made a mistake in the KATZ comment to Brian...Laura Silverman and H. John Benjamin, further dipping into the commentary reveals, hadn't quite broken up when they started KATZ, but they were in the process of breaking up.

It's not the volume of Spitboy that makes it...it's the whole Geist. It's not as if Bikini Kill, or for that matter the Go-Go's, were quieter...

I never could stand Katz, but Daria was always wonderful. I loved how she developed over the course of the series.

What put you off KATZ? Katz himself? The packagers have some fun with the evolution of Daria the character in their apology of sorts for the lack of the original music (First season Daria--"What a sellout!" Final season Daria--"Get over it...").

While I agree that Daria was the most consistently good of the MTV shows, my vote for best overall would go to Liquid Television. No there's a rights nightmare just waiting to happen for a DVD release!

And then there was AUSTIN STORIES...and we're starting to run out of MTV series which were any damned good at all...