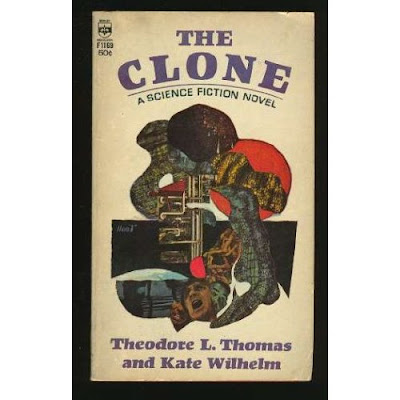 Ted Thomas is one of the underappreciated writers in sf, although he's one with a story that's Caught On in such a way that when people approach librarians or booksellers (when they can, in these parlous times, find librarians and particularly booksellers), they often ask about That story, the one about driving tests...and they usually mean Thomas's punchy little vignette "Test." Though he wrote impressively and well in other work, with such as "The Weather Man" and the short form from which this novel was expanded, as well as having a role in a lot of writerly organizing and conferencing in the late '50s and '60s (he's all over PITFCS, the Proceedings of the Institute of Twenty-First Century Studies, the volume collecting this fanzine of professionals' fannishness having been released by Advent in the 1990s--or is he? I suspect I'm having a middle-aged moment of conflation with his colleague Theodore Cogswell, who actually edited and published the newsletter--both Teds were active in the behind the scenes activities), he remains for most the not quite remembered author of "Test."

While Kate Wilhelm broke into professional writing with a good fantasy story, "The Pint-Sized Genie" (1956), which Cele Goldsmith presumably pulled out of the slushpile at Fantastic, in the years in which Goldsmith attempted to actually do her job as editorial assistant even if Paul Fairman saw his as editor as more one of broker for sight-unseen purchases of unsurprisingly usually unimpressive work, famously particularly from a reliable quartet who could and would do better, but would do what was asked of them for now: Robert Silverberg, Harlan Ellison, Randall Garrett, and Milton Lesser (not yet officially Stephen Marlowe). Even as Fairman left to go managingly edit EQMM, when BG Davis quit Ziff-Davis, bought Queen's and took Fairman along, leaving Goldsmith to make Fantastic and its stablemate into real magazines again (and Fantastic would under Goldsmith publish the short form of "The Clone" in 1959), Wilhelm went on to establish her career in both crime fiction and science fiction, publishing early novels and short fiction in both, and never quite abandoning fantasy and horror (which this novel brushes against), which she would turn more energy toward in future decades, and expanding in contemporary mimetic fiction as well...though her third book would be this fine expansion of the Thomas novelet.

This is a blob story, and the best and most intelligent blob story I know of (though Wilhelm's late husband had an excellent near-blob story with "Four in One"). Unlike Joseph Payne Brennan's fine "Slime" (or Anthony Rud's less impressive "Ooze"), it has a reasonably well-worked out scientific basis for its clone (in one of the older senses of that word in biology) to be an all-devouring entity you don't want to meet. The novel version deals in a little more depth with the characters who are in various ways dealing, some very badly, with this blob...as Algis Burdys noted in his review of the book when it was new, at least one character rather convincingly is working out the mechanisms of the creature even as it has trapped him and has begun to consume him. Though a short novel, the panoramic approach so familiar from best-selling bugcrushers, sfnal disaster novels and otherwise, is employed, and deftly...rather memorable multiple characters are heard from, and the book carries a conviction to it rather missing from a certain Steve McQueen film. Even though their next collaborative novel, The Year of the Cloud, wasn't as good, it's notable that both are thoroughly imbued with ecological consciousness, albeit this was post-The Silent Spring, even if some years before Earth Day first was celebrated.

Rick Robinson is riding herd on the Friday Books this week, with Patti Abbott likely back in the links and lists business next week.
Posted by Todd Mason at 4/29/2011 11:00:00 AM

Hmmm... I don't believe I've read this, though the cover looks vaguely familiar. There could be any number of reasons for that familiar look, however, so let's settle for "not read, but perhaps should be". For the umteenth time I miss the really great, small crammed with old paperbacks used book store that went away about 15 years ago. It was near by, almost - but not quite - walking distance, and the upstairs was full of boxes and groaning (not literally, of course) shelves with a mixture of mystery, science fiction, fantasy and the occasional western. If I had known then... I might have simply bought many of the boxes, contents unseen and sorted it all out later. It would have been hours of fun and this might have been among the finds. Maybe.

I remember really liking this one (mumble-mumble) years ago.

Then again, Rick, perhaps the boxes were full of multiple copies of Herman Wouk's THE LOMOKOME PAPERS and Jackie Susann's YARGO, or things nearly as dire. This one is worth finding.

Well, Jerry, sometime since 1965...unless you were reading in manuscript...but it's a Very easy book to like.

I dug into enough of those boxes to know there was much, much good stuff there, Todd.