FFCTB: From the Coffee Table: OUR AMAZING WORLD OF NATURE; David Kyle's THE PICTORIAL HISTORY OF SCIENCE FICTION; THE ART OF JAIME HERNANDEZ 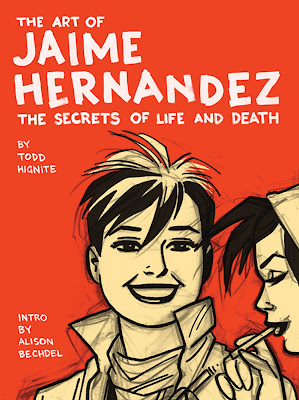 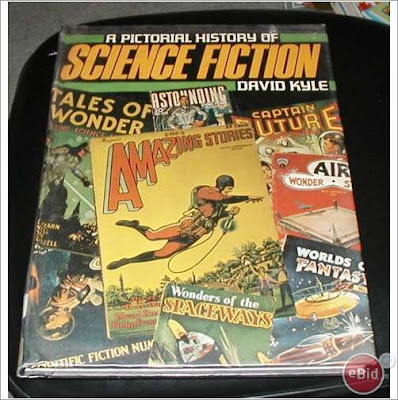 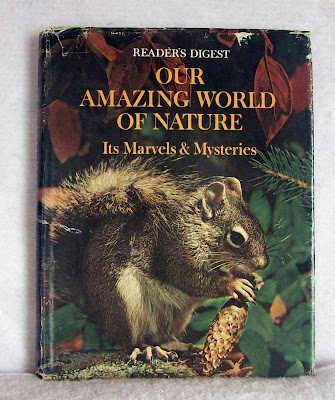 I've reviewed a number of coffee-table books over the course of the several years of Friday's "Forgotten"...but here are three which have made an impression that I'd not yet featured:

Our Amazing World of Nature, atypically for a Reader's Digest book, was not only not a collection of "condensed" essays, but was a big, handsome anthology with excellent photography accompanying a number of pop-science and natural history essays by the likes of Donald Culross Peattie...almost as if RD was saying to Time-Life, we can play your game, too. And the selections, which went from the most general essays on astronomy, geology and oceanography to rather specific entries on various species of animal, were nearly uniformly engaging...this is the first of my parents' books I remember reading from cover to cover, over the course of a number of bedtimes.

David Kyle's The Pictorial History of Science Fiction, which saw rather bad covers in both its US and UK editions (the latter above...you're tipped in part by the near-parity of UK to US magazine titles in this one) was one of the first references I paged through after catching the fiction-magazine bug full-on, and the illustrations and the rather sensible text were evocative, to say the least...the 1930s Expressionist covers for Amazing Stories alone were enough to give me an appreciation for what had been tried throughout the history of fiction-magazine publishing (I was certainly reading magazine fiction from as many eras as there were already, but one didn't find the back issues trailing that far back casually lying about): 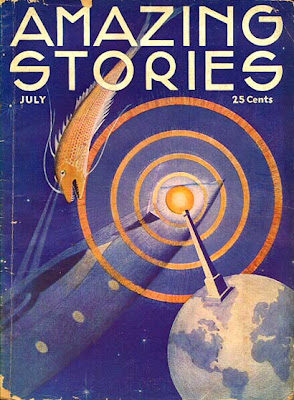 Amazing in 1933 tried an interesting run of covers... 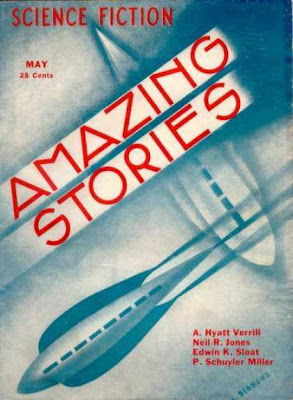 The rather more "realistic" covers of the past and future issues were at times striking, but I've always appreciated these. 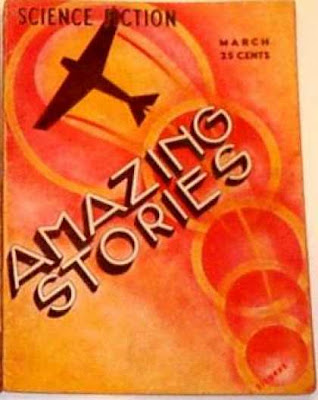 Well, this captioning workaround seems to be slightly effective in separating the Firefox-view cover images... 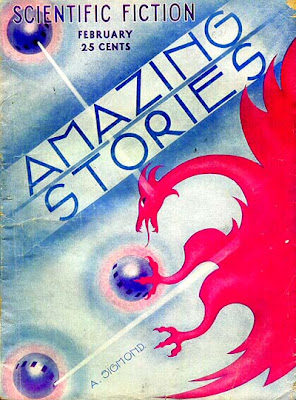 While los Bros. Hernandez, Jaime and Gilbert and occasionally Mario, the perpetrators of Love and Rockets, the flagship title for the Fantagraphics comics line (along with their critical nonfiction magazine, The Comics Journal), were probably the greatest impetus for my beginning to read comics again fairly regularly as an adult, and thus to come across Wimmen's Comix and Twisted Sisters and Alan Moore's work and that of others who had been busily advancing the form...though I'd never given up on newspaper strips, and so knew of (introduction author) Alison Bechdel's work in the "alternative" press. I'd actually bought this for my friend Alice, who fell in profound love with Jaime Hernandez's two initially-young LA punk-rocker girl characters, Hopey (Esperanza) Glass and Margarita Luisa "Maggie" Chascarrillo (pictured on the cover) who individually and together tend to be the focus of JH's stories for the comic, at various stages of their lives over the the decades the title has been published (Gilbert Hernandez focuses on the characters living in a Central American town, Palomar, in the 1950s, and their often US-emigrated offspring). Whenever one reads of comics being compared to Gabriel Garcia Marquez, one is probably happened upon a reference to L&R. 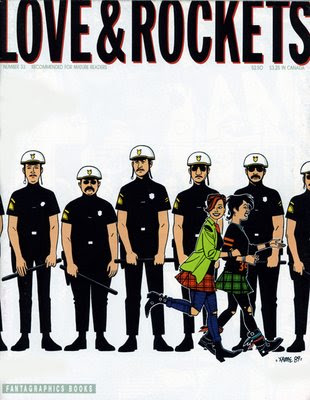 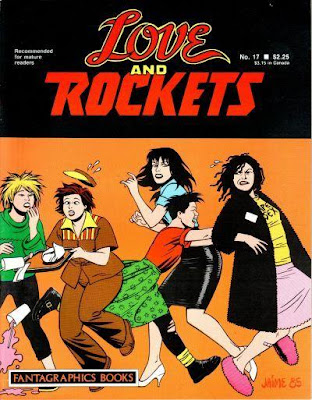 For more coffee-table (and other) books this week, please see host Patti Abbott's blog. And, goodness, does Blogspot suck. On Firefox at the moment, the Amazing covers overlap ridiculously; on IE, they are rather widely spaced. Let's see if I can fix that at all...well, somewhat.
Posted by Todd Mason at 4/01/2011 09:50:00 AM

You know, I haven't really read enough of los Bros Hernandez and ought to remedy it. There are all kinds of holes in my reading.

Kate--I suspect you'll like LOVE AND ROCKETS and most of their side projects down to the ground.

Yvette--Well, there's certainly a fair amount of the early visual work touched on in Kyle's book, as well as it being a decent introduction to sf as it had developed to the mid 1970s. Much better as a heavily illustrated coffee-table history than Franz Rottensteiner's similar book (or even the eccentric if often pretty Brian Ash VISUAL ENCYCLOPEDIA OF SF), and better for the imagery and somewhat less arguable in its historical judgments than James Gunn's ALTERNATE WORLDS...the next book to take on a similar task and do as well was the John Clute-edited, typically elegantly pictorial Dorling-Kindersley gloss on more text-heavy ENCYCLOPEDIA OF SF...I've just ordered a copy of that one, finally, for myself...but that came along some fifteen or twenty years after the Kyle.

And, really, who has read even a fair chunk of everything? Even Avram Davidson had to sleep sometime.

I have the Reader's Diget AMAZING WORLD OF NATURE myself, or if not it's because it was so tattered I got rid of it. One of the earliest "nature books" I came across, birthing a love for animals, nature, nature photography, nature fiction, natural history, etc.

I tried but could never connect with L&R, sometimes, things just don't click, you know what I'm saying. As for the PICTORIAL HISTORY OF SF, I'd love to come across an ld copy of that to flip through. Who knows, maybe I will, but I don't think I'd go our of my way for it, cool covers like the one you show or not.

And yes, Blogspot does suck, but so do most blogging programs, it seems. I choose Wordpress because they are marginally better n some ways.

Well, I've sent off for a copy of the Kyle, perhaps more for nostalgia than anything else...I really should pick up my own copies of Les Daniels's LIVING IN FEAR and Peter Nicholls's SCIENCE FICTION AT LARGE, both heavily influential on young me, sooner rather than later.

Blogspot is even easier (if also clumsier) than Wordpress, so I've stuck with it so far. But if Tumblr makes a stronger case for itself...