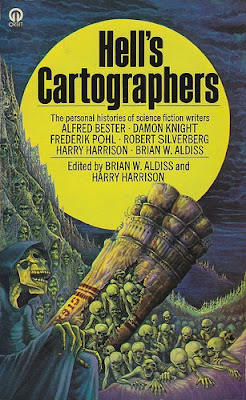 Among their collaborative projects in the 1970s, along with most notably the Best SF annual published by Berkley, Briton Brian Aldiss and US world-traveler Harry Harrison co-edited and -published the critical and literary-historical journal SF Horizons, an engaging and contentious magazine that was reprinted in boards by the late '70s so that I could find it at one or another Hawaiian library, and would make it's own even more obscure Friday Book...but among the offshoots of that effort was this anthology of autobiographical and procedural essays by six important writers in the sf field, including the editors themselves. And these essays, in their turn, were at least the seeds of Damon Knight's group memoir The Futurians and Frederik Pohl's personal The Way the Future Was, if not also of the longer or collected memoirs since published by Aldiss and Robert Silverberg. 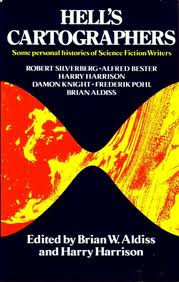 Writers are rarely averse to producing autobiography at some length or in some format, but this was, I think, the first selection of autobiographical essays by sf writers to be published, at very least by large commercial publishing houses. I'd seen Alfred Bester's first, "My Affair with Science Fiction," for it appeared first in Harrison's anthology, otherwise given to first-publication of fiction, Nova 4 (1974), sadly the last of that fine series, and the paperback edition of which, from Manor Books of all people (and they did an unusually elegant job with it), was the first book I ever gave my father as a birthday gift, to his surprise. Bester, in his usual breezy style, takes us on a quick trip through his early writing experiences (his first published short story is repurposed at submission to win a contest at Thrilling Wonder Stories that Robert Heinlein was considering entering with his first published short story, "Lifeline," till Heinlein noted that selling the same story to Astounding Science Fiction, if he could, would make slightly more money than the contest prize; as Bester elsewhere recalls saying to Heinlein much later, "I won that contest and you made ten dollars more than I did."), how he came along with TWS editor Mort Weisinger when he moved over to DC Comics and worked with other writers on all but Batman "and Rabinowitz" scenarios for a few years, before breaking into radio-drama and nonfiction writing, particularly for Holiday magazine, all the while continuing to publish increasingly sophisticated and adventurous sf and fantasy (and how John Campbell's embrace of Scientology helped chase Bester away from his magazine). Harrison followed a similar path, though he started professionally in comics, and sold his first short story to Damon Knight at Worlds Beyond in 1951; oddly enough, Knight also started professionally as much a visual artist and illustrator as he did writer, with his first professional publication being a cartoon in Amazing Stories in 1940 (among his more notable illustration jobs was for Weird Tales's reprint of Lovecraft's "Herbert West, Reanimator" in the March, 1942 issue, the same one that features Robert Bloch's "Hell on Earth," noted here recently; the HPL story had first appeared in the little magazine Home Brew).
I had read Knight's and Pohl's books previously, so their essays were interesting mostly for the small counterpoints to the longer texts, but hadn't read too much autobiography at that point from the youngest contributor to the book, Robert Silverberg, nor from the only non-Yank contributor, Brian Aldiss, and so Silverberg's journeyman passage through the men's sweat magazines and similar markets rather than comics nor primarily the pulps (though Silverberg would contribute to many of the last of the pulps as that format of magazine faded with the passing of the 1950s, and their children the digest-sized fiction magazines flourished) is a counterpoint, as was Aldiss's early experience of American fiction magazines (in the post-war era, often dumped on the British equivalents of five and dime stores after serving as ballast in cargo ships, and comparable to the influence of American records on the young musicians in Britain of the '50s and '60s) and his career as someone just a bit to the side of the Angry Young Men but like them willing to explore every sort of literature if it looked at all interesting or fruitful, while particularly devoting himself to developing his work in sf...the title of this book echoes that of once Angry Young Man Kingsley Amis's collection of lectures recast as essays, New Maps of Hell, one of the important works of criticism about sf to arise at the turn of the 1960s, along with such collections of critical pieces as Knight's In Search of Wonder and James Blish's The Issue at Hand (and Blish would probably be in this book, but was in the process of dying from cancer and the effects of cancer surgery while it was being prepared; Aldiss notes that Michael Moorcock begged off, as the only requested contributor to do so out of what Aldiss considers excessive modesty...though perhaps insufficiently-cooled anger by the mid-'70s over what had happened to Moorcock's baby New Worlds magazine might also have played a part).

So, a key book in the history as well as about the history of the science fiction field, and good fun as well as touching and startling at times, and consistently illuminating.

Thanks. Though the wages of tardiness is that only five people have even looked at the entry.

HELL'S CARTOGRAPHERS is a terrific book! Could such a book be published today? No major publisher would touch it. Maybe a small press would take it on. Or maybe only in ebook format.

Well, yes, I'd say they might...similar books of essays by humor writers and interviews with comedians were published recently, by reasonably large publishers: AND HERE'S THE KICKER and SATIRISTAS! (well, Writer's Digest Books and IT Books...wonder who owns the latter...)...and certainly some small presses, such as Luis Ortiz's NonStop, are doing similar books (such as the collection of Silverberg's autobiographical writings)...but as a midlist item from Harper and Row (or HarperCollins) today? Probably not. Though the Harper Voyager list (their sf and fantasy imprint) does have some adventurous work on it. (Hit my name-hotlink for one example.)

There's an extensive Aldiss interview in, I think, THE SAVOY BOOK, conducted a few years later, in which Aldiss reconfirms Moorcock's extreme modesty, in regard to both HELL'S CARTOGRAPHERS and his approach to writing in general.

I'll believe it. Moorcock does seem to take a measured (perhaps even to a fault) view of his life (very calm about minor diabetic amputation, for example, at least in public pronouncement--not that raging against one's circulatory system gains one anything). Though what made me append the speculation that his (mostly justified) rage over the treatment of NEW WORLDS under his stewardship might've played a factor comes from such sources as Charles Platt's DREAM MAKERS interview with him and the introduction to the recentish NEW WORLDS best-of anthology.

I love the third cover, but I bet it sold even worse than the second.

That was the Harper & Row cover, the US hardcover, with the second being the UK hardcover. I'm not sure it even saw a US paperback.