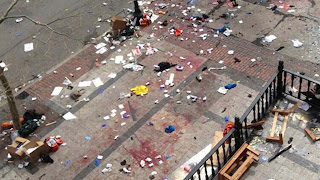 It is so weird to see bomb aftermath pics of places I've walked through, ridden through, eaten at, shopped at hundreds of times. Not used to "home" looking like a war zone. The Boston Marathon finish line is just about precisely halfway between where I live and where I work, drawing a straight line between them.


Most of the victims were brought to the hospital where I work. After the explosions, we heard lots of ambulances and news helicopters, saw TV trucks and police cars. There are still police cars everywhere. The exit ramp next to my office has been blocked off and traffic has been bumper to bumper for hours.


For the first time I can ever remember, the hospital is on Code Disaster. People high up in the hierarchy, like my bosses, were phoning one another per emergency protocol. A notice went out to the whole hospital saying we were not to leave our jobs until further notice, even if it was the end of our shift. Later on, a notice went out saying that we could leave with our supervisors' permission.


I had been intending to take the subway home instead of the company bus, because the bus route is always diverted on Marathon Day, but the subway between my job and my home has been shut down. So I've clocked out and am staying here late just websurfing and reading until the last bus leaves at 8:30, in hopes that things will have calmed down slightly and I don't have to go miles around in order to get home.


[Mason: It is my wild hair speculation that this might be a demented tax protest. Suggested that to Laura, who noted that she is even more inclined toward that view because the Marathon is run on Patriot's Day, the commonwealth day of remembrance of the War of Independence...]

The next morning's update:


I'll be riding the subway instead of the company bus for the foreseeable future. My stop is close enough to the action that the company bus won't stop there until they have permission.

Last night, the company buses were still trying to run to my stop, but the driver dropped me off so close to the hospital I almost may as well have walked the whole way home. But my situation was not as bad as that of one researcher I spoke with this morning, who was exhausted from having to walk miles home because precisely the part of the subway that he needed was shut down. Or, for that matter, that of one secretary in my department who was cheering for a friend when the explosions went off to her right and to her left - I hear she's rather shaken and her ears hurt.

I left the hospital at 8:30, about six hours after the explosions.

I hope never to see as many emergency vehicles at one time again as I did last night - everything from police bicycles and motorcycles to cars from various emergency services, to ambulances, fire trucks, and even scary black futuristic-looking trucks marked in barely legible dark gray "SPECIAL OPS" with no further affiliation. I encountered phalanxes of vehicles moving down streets, and even one huge chunk of at least fifteen mixed vehicles parked together on a street with their lights flashing. Sirens blared in the distance even though regular traffic was very low. Streets were barricaded all over the place, manned by people in military camouflage and helmets. I even saw two trucks marked "Salvation Army Emergency Services."

I also have never seen so many satellite trucks. TV trucks were scattered everywhere from the hospital all the way right down to the block where I live. In the vicinity of the hospital, there were a couple of sets of lights set up with reporters talking into cameras.

There were so many cops on foot that after a while, I put my hospital ID on so as to look more reassuring. It apparently made me look less suspicious, judging by their friendliness, but it didn't help me from getting stopped and redirected further and further from home. I would declare which intersection I wanted to go to, saying plaintively, "I'm just trying to get home." The cops would smile and say sympathetically, "Sorry, but you have to take a left here and then two rights and..." et cetera. I found myself on unfamiliar streets, but there were so many police around that I didn't feel afraid. I was able to keep my bearings and finally got to my block.

I was shocked that some shops were closed - the chicken rotisserie restaurant and the Whole Foods - but the drugstore was open, as was, as I expected, the diner that had stubbornly stayed open regular hours during last winter's blizzard. I got a sub.

Just as I was about to cross the street with my dinner, an ambulance came by shrieking. I was annoyed - there were no vehicles in front of it for an entire block - but I guess everyone is on edge.

Todd, I offer my deepest condolences to the families of those who lost their loved ones, to the dozens of injured people, to the people of Boston, and to all the people of the United States.

Todd, I'm sorry for your city and its people. especially the killed and injured. Hope you all recover quickly. Boston is a great city. I've been there several times.

Thanks, folks...though, Charlie, we come closer to sharing a city than I think you remember...we're both in the Philadelphia area. My friend Laura is the one who has lived in and around Boston for decades, now, her neighborhood which was so callously attacked by insane thug or thugs...I lived in the Boston 'burbs from 1969-73 and again, more distantly, from 1976-79. The last time I was in the city was to visit with Laura, after attending the ReaderCon in 2011...the Hub is a bit like Philly's more uptight twin, with even more universities if fewer med schools...med schools can, unfortunately, come in handy.

My daughter, who lives in Brookline, was away from the bomb blasts. But everyone in Boston is understandably on edge. And, there's a distressing lack of facts about the perps.

Thanks for this post, Todd. What a dreadful day for Boston and for all Americans.

OOOPS! You're right Todd, I do remember. Lost my head there! Totally embarrassed!

No need to be, Charlie...there are, as we might note, rather more pressing matters at hand, entirely too often. Hope you, Yvette and George, and your daughter as well, George, aren't too unsettled...seems like we have fun busting out all over, though I haven't yet looked into what tipped the postal inspectors to go looking for ricin.