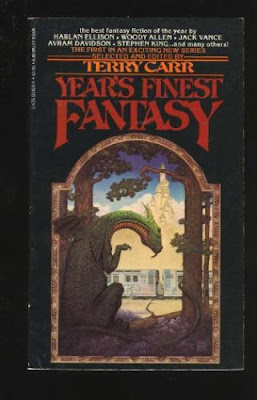 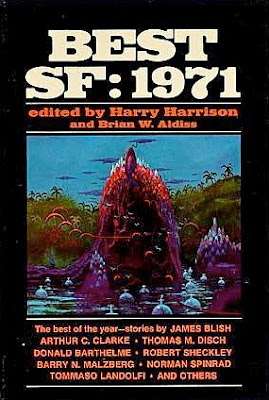 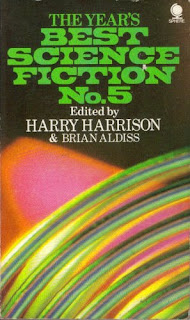 So, here are two books which, along the horror anthologies and the Hitchcock antologies and the humor anthologies and eventually the Judith Merril anthologies (among much else, of course), helped shape my view of what literature could do, and why attempts at hard and fast distinction between "genre" fiction and (most pathetically) "literary" fiction are useless at best and pernicious and destructive at worst...they've certainly helped limit and end careers for talented writers throughout the previous century, at least.

It's difficult to read "The Genius" by Donald Barthelme side by side with "Angouleme" by Thomas Disch and say that the first is literary art and the second a mere entertainement written to preconceived limitations, and even if that was remotely true of the Disch, one would have to wonder why it was assumend no preconceptions were at play in the compostion of the Barthelme. As it was, these were two of the stories which utterly floored me in the book, even in the presence of such major work as the Clarke, and the duo from Malzberg, the Spinrad and one of the best stories, slightly time-displaced in a Best of 1971 volume, by Ozick. "The Genius" certainly spoke to me as I reread it on a school bus, on the long hike back from a field trip to the New England Seaquarium as I recall, with my busmates in my vicinity wondering why I was so engrossed in that odd book. What are the responsibilities of being a genius? Can one choose not to be one? A compelling set of questions; nearly as memorable, the convocation of geniuses, several hundred geniuses in one room, reminding our protagonist of his less than utter uniqueness and putting him in a bad mood for several days.

Landolfi's Cancerqueen excerpt haunted me ("Cancroregina" in the language of the author and my grandfather's family), even as Wilson flowchart guide to monster movies (reptinted illegibly in the Sphere edition, even when I had good eyes) blew me away even among the many funny shorter bits, and the acid not so short Sheckley lead-off, included here.

Bill Crider recently reprinted George Kelley's contemporary review of the Carr volume for Paperback Quarterly, and while I commented extensively there, I'd still like to note here that while this volume wasn't quite as unworried about going "outside" the "boundaries" for its contents, it still kept alive the traditions Carr had established with his fine New Worlds of Fantasy trio of anthologies back in the latest '60s and earliest '70s (more directly contemporaneous with the Harrison/Aldiss volume above); this first volume of his annual, which would continue as Fantasy Annual after moving with Carr's publisher's editor David Hartwell from Berkley to Pocket Books, after a second volume with B/P) would've contained Jorge Luis Borges's "The Book of Sand" as well, if Carr was willing to pay the stiff reprint fee demanded. As it was, this volume stands as an iterestingly mixed bag, with excellent stories (unsurprisingly) from Vance, Aickman (which got across to adolescent me the potentially creepish aspects of parenthood), Ellison (not his best fantasy, but just a cut below) and Davidson (though it took me longer to warm up to the Limekiller stories than it did to some of Davidson's more flashily erudite and hilarious work). Ir also, with the inclusion of "The Cat from Hell," confirmed for me that I often found King's work suprisingly dull, crude, and generally dismal, particularly given how much people seemed to love it (while also finding the occasional story, such as "Children of the Corn" as collected in a contemporary Year's Best Horror Stories annual volume, suprisingly good, leaving me to wonder why dreck such as "Cat" was being written, published, and lauded); the (bad sort of) ridiculously smug and cutesy "Descent of Man" was the first exposure, I believe, I had to Boyle, who has tended in his shallow and striving way to appear in magazine issues and anthologies I often otherwise enjoy with appalling frequency over the decades since, usually offering a sort of sub-Ellisonian attempt to be clever and challenging and failing dismally...I have read one, and only one, decent story by him, in Zoetrope All-Story several years back, which just makes me wonder what he might achieve if he didn't so consistently attempt to be so clumsily ironic and fashionably broad in his affect. The Woody Allen story of sorts is typical of his literay work, a series of some good and other jokes barely stuck together as a narrative...a sketch in prose rather than a truly realized story. The early Utley/Waldrop, like the Reid, is more promising than indicative of what the former duo, at least, could do...Utley was already producing better work, and Waldrop would really flower in the next decade. The Moore has most of the flaws of the Boyle, as most of her work did, without being quite as impressed with itself. Oddly, I remember reading some of this one for the first time in the Hirschorn Museum in DC, as I was resting after taking in a good chunk of the collection that day, in a month or so I spent in DC in '78.

All in all, interesting books, not perfect ones, and they did nothing to quell my continuing habit of picking up annuals, even in the rare occasion that I've read most of the contents.

For more "forgotten" books, please see George Kelley's blog...at least he and Bill Crider are highlighting books this week by the late Manly Wade Wellman, whose birthday anniversary is today.
Posted by Todd Mason at 5/21/2010 10:57:00 AM

Just reading the titles of some of those stories sends me into a frenzy of nostalgia. I know stories just as good or better are being written now, but still . . . .

It was one of the several most adventurous times in the SF/Fantasy community, the early '70s...as the various threads of the '60s were continuing to be represented in publishing, and not yet swamped by Tolkien clones and STAR WARS-inspired dumbing-down...

By coincidence, Best SF: '67 showed up in my mailbox yesterday, and I dropped everything else to reread it. This was a great series, but -- judging by the TOC for the '71 edition -- Harrison and Aldiss soon strayed from the credo (written by James Blish) they published in the first volume. (Specifically, they were trying to differentiate this series from the Merril Year's Best anthologies.)

The Carr annuals were always a favorite of mine, far outshining any others on the market.

Well, they broke their own rules with the first volume! (--as Algis Budrys, reviewing it for GALAXY, was quick to point out), in running the rather older fantasy vignette by James Thurber.

I think Blish was more interested in seeking purity than Harriaon and, with increasing input as the series went on, initial junior partner Aldiss...not to mention that Blish and Merril were two people born to argue, and particularly with each other.

Blish's comment (in BEST SF '67) about litmus-testing the contents for an annual politically was pointed at the Wollheim/Carr annual then extant, by the way...Merril, as with her decades-long argument/friendship with James Blish (initially a fascist sympathizer v. Merril's passionate Trotskyism--they both ended up rather closer to centrism, though Merril still in the belly of counterculturalims in Toronto), was always open to other views...which she would take issue with in her prefatory notes.

I liked Carr's annuals a lot, too...I preferred the Page and Wagner YEAR'S BEST HORROR in the '70s to anyone else's annuals, but Carr's sf, after he went solo after the 1971 volume (and both Carr and Wollheim left Ace), might've had an edge over the Wollheim, or the Del Rey (and then the first Dozois series, after he took over for him) for me...though I was still a supporter of the Harrison/Aldiss eclecticism by the time I caught up with their later (and earler) volumes. Frederik Pohl and 4SJ Ackerman also had competing annuals briefly, leading to one of Harlan Ellison's best review essays for F&SF, riding that herd.

After Lin Carter left the DAW Books YEAR'S BEST FANTASY completely in the hands of Arthur Saha, that series was pretty comparable to Carr's FANTASY ANNUAL...though both disappeared too quickly.

As you point out, I was a big fan of Carr's collections. And DAW used to put out a variety of collections each year. Sadly, that practice has ceased. The Seventies were years of wonderful experimentation in SF and fantasy.

DAW, which is in seriously straitened circmstances these days, still puts out some anthos, though most of them seem to be Martin Harry Greenberg theme anthos.

We still see a fair amount of experimentation, but perhaps not as much giddy and/or throw it against the wall and see what the kids buy activity, certainly not on the part of the larger commercial publishers. Hence the discussion of small presses right now among the Wellman reprints.

We have lost a few key annuals of late (such as Susie Bright's erotica annua and the Ellen Datlow/Gavin Grant & Kelly Link fantasy and horror annual) and consolidations (such as the separate Rich Horton volumes being combined) and package downgrades (notably the Hartwell/Cramer fantasy annual rather amateurishly printed on demand by Tor.com), but we've gained just a little bit (Rachel Bussell's BEST SEX WRITING, Ellen Datlow not skipping a beat and coming back with YEAR'S BEST HORROR).

I think I liked Carr's original-fiction anthology series UNIVERSE more than I liked his BOTY annuals, story for story. We could've used more of Carr's own fiction, too.

Notable that I managed to snag the cover for the second (and last) of the Carr annual for Berkley, rather than the first (Carr and his annual followed David Hartwell over to Pocket Books, where it became FANTASY ANNUAL, rather generically.)

Since fixed, btw, the cover error.

Looks like 1971 was a Very Good Year for SF. I have some of these collections but I only remember reading the Terry Carr.

Pretty solid year, '71, in a number of ways, indeed. And you'll see, George, that the link to the reprint of your review of the Carr (from 1978) is included here...a redux review not so tagged because I didn't have access to a non-lobby computer while attending a funeral in Vermont yesterday...back home today.