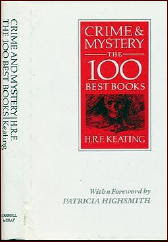 H.R.F. Keating passed on 27 March, and we lost another gentleman, by all accounts, in the CF field, one who had been a fine fiction-writer (most famously for the Inspector Ghote stories) and critic both, and this book, widely available but barely in print (the current edition is handsome, but still a product of the collapsed Carroll & Graf; one hopes Running Press or someone might reissue it), is a gimmicky (in format, and I think the first of its series for C&G, which series has also included notable volumes on sf and horror fiction) but no less valuable selection of a hundred important and valuable books in the CF field, most of them of the "true" mystery rather than suspense or other related fields, some collections (leading off, unsurprisingly, with a Poe collection) though most novels, all given two-page essays to limn their virtues and what flaws they overcome. The Keating assessments are bookended by Patricia Highsmith's two-page introduction (even Highsmith had nothing but good to say of Keating) and an unsigned "Publisher's Note" adding a 101st entry, for one of Keating's own Ghotes. Aside from the insightful and deftly-written vignette entries, Keating also doesn't respect received wisdom: he nominated for Ross Macdonald The Blue Hammer and for John D. MacDonald The Green Ripper, the often-dismissed last novels in the two Macs' famous series (Lew Archer and Travis McGee), and makes the case for these specific novels well (hey, I started reading RM with The Blue Hammer, and I wasn't sorry), while the all but inarguable classics (Stanley Ellin's short fiction, The Maltese Falcon, Murder on the Orient Express, The Friends of Eddie Coyle) are treated similarly. Despite at least one dunderheaded comment I've seen, going on about how "outdated" this book is since it was published in 1988 (remarkable how books spoil, isn't it), the book is joy to go through, argue with, and be informed as well as amused by. 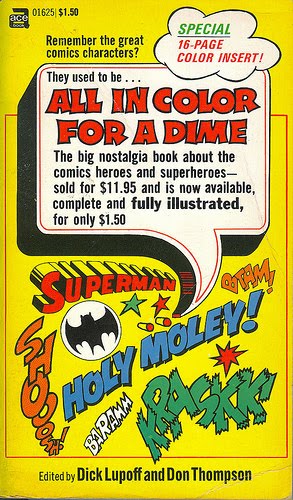 Also "outdated" (I mean, it hardly deals with comics after the '40s! I mean, come on!), All in Color for a Dime, which I've reread in the Krause Publications 1997 reissue, retains the enthusiasm of the new ground being tilled (since most of the essays at least have roots in articles in Xero and Alter-Ego, with Comic Art pioneering comics (and other matter) fanzines from the earliest '60s, and this book was pioneering when first published in 1970). The contributors run most of the changes one could want on their subject matter (and they range from such passionate professional writers of fiction and pop-culture history as Ron Goulart, Harlan Ellison, and Lupoff himself through folks with feet in multiple camps such as Ted White and Jim Harmon, to folks whose primary work was extraliterary, but nonetheless, such as Chris Steinbrunner, had a long engagement in criticism or other sorts of similar work in literary circles (Steinbrunner was, among other things, Ellery Queen Mystery Magazine's a/v columnist for a decade or so: "Bloody Visions"). While, as I mentioned last week, the Blue Beetle is nowhere mentioned (the book is not attempting to be comprehensive), the coverage of the evolution of the Love Romances Publications line of comics, Planet Comics and its stablemates, would be worth the price of the book alone, as would the pioneering Lupoff article on Captain Marvel and his eventual clan, or Ellison on the George Harriman-esque George Carlson (only Carlson was busy where Harriman was lean). 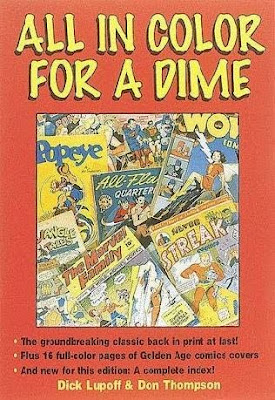 Science Fiction at Large, the first anthology of critical essays (speech transcriptions rendered into essay form) I read, which had somehow found its way into my first high-school's brand-new library in 1978, and featured impressive essays by Ursula K. Le Guin and Thomas Disch which were to grow into or form important parts of later books (UKL's "Science Fiction and Mrs. Brown" was collected in her The Language of the Night; "The Embarrassments of Science Fiction" is integral to Disch's The Dreams Our Stuff Is Made Of and has been collected in his On SF), as well as by Harry Harrison, Alan Garner, John Brunner, Robert Sheckley, Philip K. Dick, and the editor; Edward De Bono's introduction to his take on "lateral thinking" was very useful to me then, and remains so. I haven't yet reread John Taylor's essay, and Alvin Toffler's remains slight. A book worth seeking out.

I nearly wrote about one of the Inspector Ghote books for this week's FFB. But I'm saving it for a larger article on five of Keating's books - a sample of his fiction contributions to the genre. I found a few new authors well worth reading from this book. I'd like to track down his Christie book - he was a huge fan. Also Murder Must Appetize sounds like unusual genre history reading. Food in the crime novel. Do you know anything about that?

[Word verification for this comment: Polessi. (noun) What an Italian character in a Harry Stephen Keeler novel calls a cop.]

I have the later edition of All In Color... and enjoyed it. I didn't expect it to cover too far into the century as it states "for a dime" in the title and that price changed for most comics by, what?, 1956? Sooner? They were a dime when I started buying them, but went to 12 cents and then 15 cents not too long after.

It's an entertaining look at the industry, as I recall.

Looking forward to that, John (the Keating essay, not so much the neo-Keeler incidents). I haven't read that, nor seen it, but CF and particularly classic mystery buffs so love their associational exploration (not that, say, sf writers haven't had their cookbooks over the years).

Yeah, Rick, I was joking (about the kind of imbecile who thinks that 100 BEST BOOKS is outdated because it doesn't cover books published after it...as if anyone is fool enough to propose a finalized and unchanging canon of literature through the ages...not even Mortimer Adler...). Though that a few relatively obscure, once popular figures weren't touched on at all (or now not obscure at all, such as Carl Barks) was almost too bad. But there hasn't been Too much written about PLANET COMICS since, I think.

For once, I have all three of your FFB books! I actually bought the Keating book when it came out and slowly read all the 100 books he recommended!

Yes, this is nostalgia day except for the Keating, so I'm not too surprised they were in your collection, as well (I have the Ace paperback of ALL IN COLOR in a box somewhere, as well). I have read perhaps the equivalent (given the various collections of Poe) of about twenty of Keating's hundred (plus the publisher's one). I'd run a bit higher with the two Horror Hundreds, and I'd have to take a look a the SF and fantasy books again...