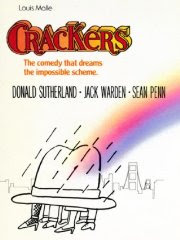 Crackers (1984) is a decidedly odd film, less for its intrinsic content, a not completely humorous heist film, as for its obvious relation to the fiction of the late Donald Westlake, particularly the Dortmunder stories, the relatively lighthearted series Westlake spun off from the relentlessly grim Parker series, when a Parker plot he was developing kept wanting to be written about reasonably sensible, professional crooks who kept being foiled by circumstance, rather than ruthlessly and efficiently succeeding (as Parker does in his stories). The novel that introduced Dortmunder and his crew, The Hot Rock, was famously filmed featuring Robert Redford as Dortmunder.

Crackers, written by Jeffrey Alan Fiskin and directed by the hardly obscure Louis Malle, features the even less obscure Donald Sutherland as the Dortmunder-like character who can't seem to catch a break, named, cheekily, "Westlake." The crew of safecrackers and supporting staff is masterminded by "Westlake," who has a Dortmunderesquely complicated plan to steal a thug's safe with some inside help. Nothing goes completely right.

The film has a pretty impressive cast, many of whom had and/or would again work with Malle, such as Sean Penn (not good, but not the hambone he has since become), Jack Warren, Wallace Shawn, and Christine Baranski, and introduced Tasia Valenza, who has mostly done animation voice-actor work in the last couple of decades (though a lot of it), and was an early credit for Trinidad Silva, who would make more of name for himself with his recurring role on Hill Street Blues. As a semi-comedic heist film, it almost succeeds, with a lot of failed jokes mixed in with decent ones, and some dramatic gambits which simply don't pay off (such as the young woman who wants to become a prostitute persuaded not to by the goodnatured pimp, koff, who has grown fond of her).

But what's strange is just how much this film echoes an already-established literary and to some extent cinematic franchise, with a wink and a nod and no claims of parody, just attempts at pastiche. As one writer put it, having heard the description of the film, "sounds actionable."

This film is not currently available on dvd, and I don't think it was ever issued on disc, though a VHS release some time back was available. Amazon and perhaps others will stream it for you...Hulu was offering it for free at one time, but no longer. I caught it, rather randomly, on a pay movie channel some months ago.
Posted by Todd Mason at 4/19/2011 06:56:00 PM

I've never seen it but I reckon it's my kind of Sunday morning thing.

It's almost good, and it's a real pity they didn't just adapt a real Dortmunder story instead.

I've been wanting to see this for about 10 or 12 years now. I quite like Louis Malle, and even if some movies are flawed they've always been worth watching at least once. I like how he always moved to a different type of story and had a very adaptable style.

Well, Amazon streaming...probably Netflix and others, as well...pity Hulu's taken it down, but, again, more a pity Malle didn't simply come to terms with Westlake and his people.

It feels a bit like the remake of THE STEPFATHER...a largely impressive (or good-enough, all told) cast, not given a good enough script...when the Westlake original was pretty brilliant.