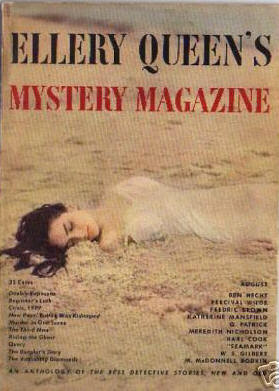 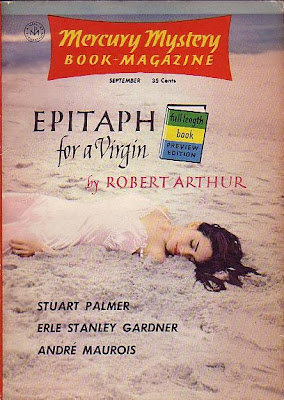 Ellery Queen's had a number of photo covers in the early 1950s (and in the latter 1950s, with often relatively racy illustrations on the newsstand edition covers, to avoid mail censorship or, more likely, embarrassing subscribers, the latter's copies often sported subdued line-drawing covers instead), while it was still a Mercury Publication but after that house had sold American Mercury to the first in a succession of ever more right-wing publishers, eventually to fall into the hands of too-close-to-Nazis (who reveled not just in far-Right politics but in reprinting every slur and arguable slur against Jews and Judaism H. L. Mencken had ever published during his editorship of the magazine). Many, if not most, of those photo covers were pretty dire, but this one, despite the suggestion of the subject's demise, strikes me, as obviously it struck Mercury art director George Salter, as worth a second look...and, also obviously, worth flipping (at least for typographical convenience's sake).


For the hell of it, the two well-known Bettie Page covers for EQMM: 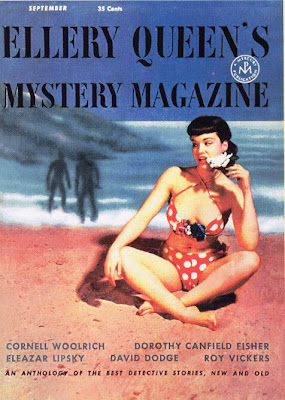 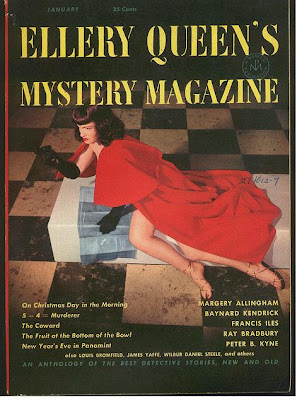 As frequently, Ed Emshwiller painting with Carol Emshwiller and himself as models, for January 1957... 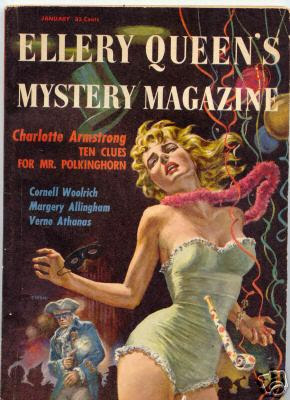 ...and the sedate subscribers' cover: 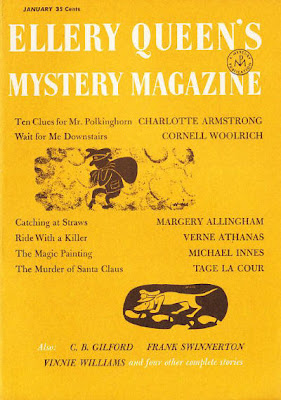 Meanwhile, Mercury Press gave that photo a Real Workout--their shortlived true-crime title, edited first by true-crime writer Edward Radin, and then, like The Magazine of Fantasy and Science Fiction, by J. Francis McComas and "Anthony Boucher": 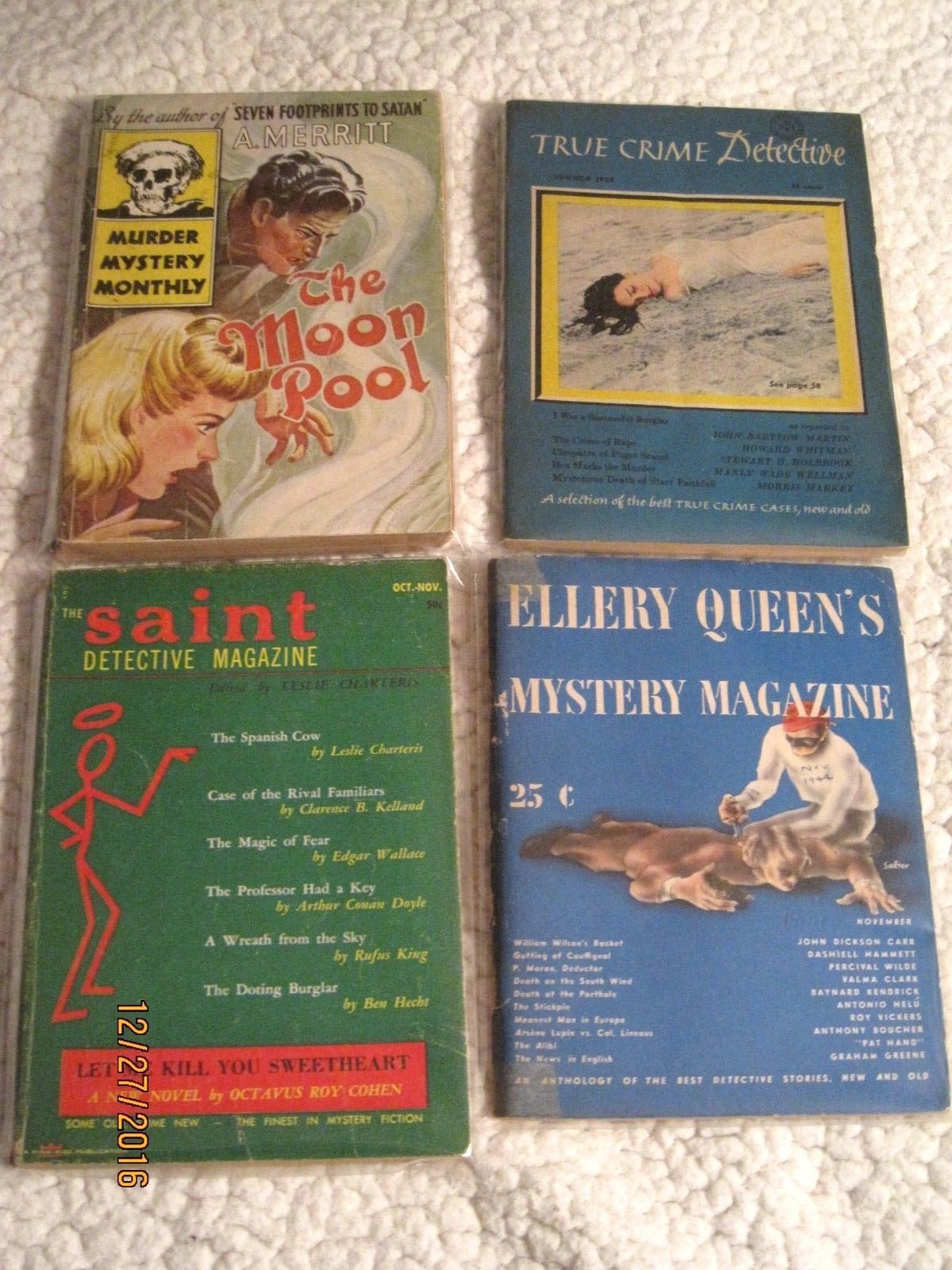 That January Bettie Page issue is a hard (and expensive)one to find. At one time I had copies of all the others shown.

The MERCURY and EQMMM issues with the same photo were available at a comics/book/magazine shop I frequented (and which has since gone eBay-vendor only), but were priced just a bit beyond what I was willing to pay for the condition they were in...I should've snagged at least the MERCURY anyway, for the Arthur novel and other contents.

So...what happened to your copies, Jerry?

I have a complete run of EQMM from 1941 into the 1980's, then scattered to date. But reading your post reminds me that it really is not complete because I never bothered to collect both the pictorial covers and the sedate subscriber issues. I have a mixture.

Thanks alot Todd, now I have to worry about correcting this collecting flaw which I was always aware of but figured so what.

We are here to serve!

Nice pix -- should boost your page views, too. Just add Bettie! She always looks like she's having fun. May not be true, but that's why we love illusions.

By the by, did I mention liking the new spring tones?

So far, a smaller bump than new posts usually get--go figure (or, even with hers...Emshwillers a bigger draw here!). And, thanks...though the New Blogger typefaces are a bit harder to read than I'd like, and Blogger still refuses to play well with browsers...what makes for less ridiculous amounts of white space in IE turns out to obscure the text in Chrome, while looking just fine in Firefox, in which it was composed. In Safari, it's all in Cyrillic, no doubt (I don't have that to check and revise in, as yet).

Todd, most of my collection was sold off to dealers about twenty years ago. That (and the sale of my house) helped put both daughters throuogh college. My collection of 5000 comics was sold 17 years earlier to pay for the birth of my oldest daughter.

Now that we are in a smaller house, what books I have left fill a storage shed in the back yard. Usually when I finish a book nowadays, it either is sold, traded, or given away. Even with that, the shed is busting at the seams. **sigh**

Perhaps the only true advantage to eBooks...well, that and being able to enlarge the type when necessary...

At least the older collections were sacrificed in noble causes...