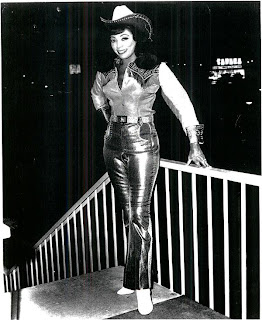 Two volumes devoted to lavish sampling of the imagery and history of underappreciated pop-culture, the one of the 1950s, the other of the half-century in and around what was becoming the country's Second City, and disputed capital of performing arts and their recording. Two good books, worthy of attention, but flawed (particularly as published) and perhaps more expensive than they might be...but labor-intensive labors of love. And it'd be hard to gainsay the books' progenitors. 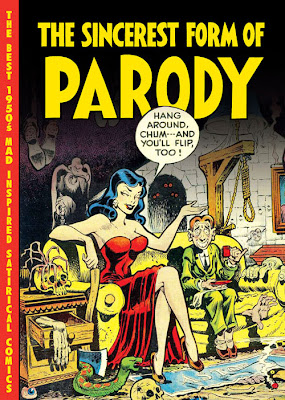 John Benson, in his historical essay accompanying the selections from the comic books that arose, imitatively, in the wake of the sudden success of Mad in 1953-54, notes that as a passionate young fan of Mad who couldn't get enough of Harvey Kurtzman's innovative satirical comic, he would scour the drugstores and other newsstands in shops up and down Haddon Avenue, a mile or so away as I write this, from Cherry Hill to Camden, New Jersey, hoping to get a Methadone sustaining fix from the issues of mayfly imitators he could pick up (comics publishing has always been irregular at best, with unreliable schedules augmented, if that's the word, by genuinely awful newsstand distribution at least until the advent of the direct-sales stores). (That probably makes Benson old enough to have the kind of eyesight that doesn't appreciate the kind of microtype in which Fantagraphics chose to print his essay, and particularly his footnotes, and Jay Lynch's introduction; I certainly don't, at some decades younger.) The comic stories and one-panel/page images reprinted here are a mildly representative survey of the various titles in standard comics format, with at least one example from the publications of nine different publishing entities, usually established comics imprints (EC itself with the Al Feldstein-edited Mad ripoff Panic, Charlton, Atlas [which would eventually become Marvel], Harvey) as well as packagers for smaller or less durable companies, and at least one startup, Mikeross, which EC essentially sued out of existence, Benson suggests for being a little too good at mocking EC at their own game. Mikeross's Get Lost! has apparently been collected in at least one other in-print anthology, so Benson mostly includes here only the rather deft parody of an EC Feldstein horror comic that, along with aping the cover format of Mad and Panic rather closely and being handled and partially bankrolled by EC's distributor, might've brought EC's particularly focused wrath upon them. The other fake Mads didn't usually manage to arise to the level of Get Lost!'s sample story, though Al Feldstein's lampoon of Mike Hammer for Panic is another highlight of the book (among the supplementary images collected here is Marie Severin's sketch of Feldstein poring through I, the Jury before writing his script). And, of course, Panic as an EC title has been (at times lavishly) anthologized in a way that Bughouse and Flip! (probably Benson's least- and most-favored imitators, respectively) have not been. And the reproduction here, including of some battered covers (presumably from Benson's childhood collection, though that isn't made clear) as well as pristine page-layouts, is excellent; my colleague and comics fan Jeff Cantwell notes that he's always gratified when no attempt is made to saturate the colors of "Golden-" and "Silver-Age" beyond those of the original images as presented. (The pages of the book do, however, have a slightly odd scent, perhaps in large part because of the kind of ink used, rather than the heavy and perhaps acid-free paper.) And while Benson is careful to mention the relatively few 8.5 x 11" magazines that immediately followed Mad's conversion away from the standard comics format (and a few latter-day imitators such as Marvel's Crazy, launched at the height of Mad magazine's 1970s success and as a part of a line of Marvel "oversized" comics), Benson doesn't note the college humor magazines that were already fellow-travelers of Mad comics in the '50s and earlier, nor such latter-day standard-comics-format titles as DC's Plop! and Marvel's Not Brand Echh; Benson is careful to note, however, that even as at EC, often the satire titles were the mutant cousins of the horror comics (as Plop! certainly was in the 1970s). And as Roger Price noted about the not quite Onlie Begetter of all this ferment at the time, you could always use this book to quiet the hum of one's potrzebie.


Longtime LA dj Tom Reed's The Black Music History of Los Angeles, It Roots: A Classical Pictorial History of Black Music in L.A. from 1920-1970 (one is probably not too far wrong in suspecting publisher Black Accent LA Press is essentially Reed himself) is also a slightly odd physical specimen, printed rather obviously in the manner of a high-school yearbook, heavy slick paper, textured boards and all, only with a dust jacket featuring excellent reproduction of photos of Dexter Gordon on the front, Nancy Wilson on the back, and no lack of other fine shots of jazz, pop and gospel performers inside, along with images of memorabilia (record labels, ads for concerts and broadcast shows, etc.) and relatively sparse and nostalgic text (no problem reading these typefaces!). In fact, the scrapbookish miscellany here lends itself to the yearbook formatting, and plethora of signed photographs and such simply reinforces that appropriateness. Less a reference about than a celebration of its subject, it's a book that will make even more sense as a web album some day soon...where one might actually hear some of these brilliant artists (including a few, like Redd Foxx, who were not primarily musicians) at work along with seeing the candids and professional portraiture. La Melle Prince, in her 1950s cowgirl outfit, cheek by jowl with a famous picture of Jelly Roll Morton gazing moodily at his piano. Louis Jordan (and Tympani Five) a few pages away from the Raclets. 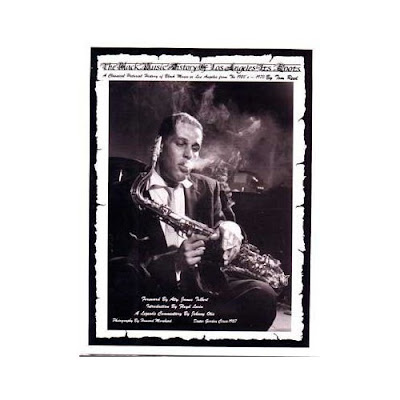