Friday's "Forgotten" Books (plus a Saturday addition): The Links and more... 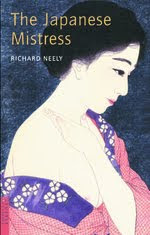 Patti Abbott is indisposed...I've lost track if this is the fun week or the antifun week, but this week and next I'll be hosting the links to Friday's set of book reviews and citations...as always, thanks to all contributors and to all you readers, and if I've overlooked your contribution, please let me know in comments. Thanks again!

Bill Crider: The Day the Sea Rolled Back by Mickey Spillane

Martin Edwards: The Verdict of You All by Henry Wade

Jerry House: The Hypnotic Experiment of Dr. Reeves and Other Stories by Charlotte Rosalys Jones

Kate Laity: The Complete Verse and Other Nonsense by Edward Lear 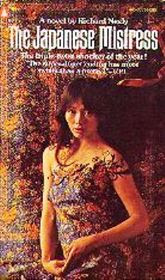 Francis Nevins: The Case of the Barking Clock by Harry Stephen Keeler; Report for a Corpse by Henry Kane

Ron Scheer: In the Country God Forgot by Frances Charles

"TomCat": A Wicked Way to Die by "Jeremy Sturrock" 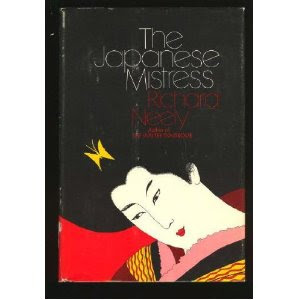 The Japanese Mistress (Saturday Review Press, 1972) is Richard Neely in a John D. MacDonaldesque mood (even down to the boat as temporary residence, albeit in California rather than Florida), till things get typically Neelyish in the final chapters. What begins as a smoothly-written and rather romantic tale within a tale of a GI's adventures in postwar Japan, laying out the possibly only lightly fictionalized story of the Japanese mistress of the title, is soon a key part of an intensely recomplicated account of the jaded and sexually frustrated upper middle class in Sausalito, California, in 1968. The author of the probably autobiographical romance is a hardworking ad exec, who has a wife he doesn't get along with and an adopted daughter he dotes on; the wife has a male cousin who comes to town, a slightly down-on-his-luck writer, with whom she had played some Doctoresque games in their early adolescence; things don't get any less prone to tension, deceit and questionable sexual liaison from there. It's difficult to describe this novel without giving away the twists on which it depends too much, given how well Neely could juggle narrative and character; he just loved to dive into the sleaze, as well, and make little bombs out of that as it suits him to reveal them. To this end, one important piece of misdirection is not quite fair play with the reader, as a character will be repeatedly described, some distance into the second half of the book, with a certain descriptor, while another important aspect of that character is improbably never mentioned nor even obliquely referred to "onstage" by the other characters...rather as if Norman Bates was presented in either the novel or film Psycho as apparently just a local resident in his town, rather than as the motel's manager, and yet still having the run of the motel and the house up the hill. The revelation that, Aha, that's why he had the motel pass-keys would be a bit of a cheat there, and the withholding of a somewhat similarly key datum in this novel is likewise a cheat, and even leads up to an incident of two characters being observed together that is somewhat ludicrous in retrospect...but doesn't quite spoil the novel, with its breezy passage through the lives of its privileged, desperate characters, all but the writer-cousin more comfortable in their positions in life than typical noirish characters might be (and even he facing only temporary setback)...this might well be the weakest of Neely's suspense novels (I've just begun to read a number I've purchased recently, and I hope so, at least), and it's still a compelling read...and the resolution has overtones of at least one prominent "celebrity scandal" of a couple of decades after the book's publication. One only wishes that it didn't rely so heavily on gimmicks for so much shock value, and didn't try to paper over the objections one might have to the rosy portrait of the situation at novel's end it hopes to leave the reader with...Neely can definitely be seen chuckling in the middle distance. 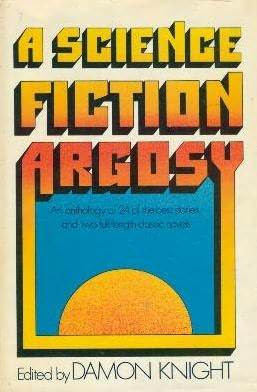 A Science Fiction Argosy (Simon and Schuster, 1972) is, as Damon Knight notes in his introduction, the kind of bug-crusher of an anthology (over 800 pages) he wished he'd been handed as a young sf reader in the 1940s, when the sf he could ferret out at the Hood River, Oregon, public library was relatively sparse (no one even pointed him to some of the more famous Verne novels, he notes). Some of these stories, Knight admits, are sf only by stretching the term (such as the surreal fantasy of Fritz Leiber's "Rump-Titty-Titty-Tum-Tah-Tee" or the slightly pixilated humor of Shirley Jackson's "One Ordinary Day, With Peanuts"...I still can't believe that the bald sexual joke of the Leiber's title escaped me at first reading, but then so did the only slightly less bald one of Theodore Sturgeon's story "Affair with a Green Monkey," so impressed was I with other aspects of both stories; the Jackson was published with similar quality over content judgment in The Magazine of Fantasy and Science Fiction, after other markets foolishly let it slip by). And while some of its contents were more likely to loom impressively (and already had been collected in various sorts of best-of anthology) in the decade or so before this book's appearance ("Sea Wrack" by Edward Jesby, for example, or "Bernie the Faust" by William Tenn...another questionable inclusion as sf rather than as fantasy), their general neglect in the years since help make this book perhaps even more valuable now than when it was new...as does its inclusion of two novels, More than Human by Theodore Sturgeon and The Demolished Man by Alfred Bester, which were certainly available in 1972 in paperback, but no longer in boards (except perhaps from the SF Book Club)...the Bester is not in print in the US, at least, though readily available (and, sadly, Knight's reprint doesn't replicate the full typographical complexity of the Galaxy magazine serialization any more than any other reprint has). (A sad little coda to the affair is that Knight for no compelling reason wants to perpetuate the fannish notion of the Big Three sf/fantasy magazines, by crediting the vast majority of the contents here to Astounding/Analog, F&SF and Galaxy [where the Bester was serialized and the central section of the Sturgeon was published as a novella], without taking into account how many of the F&SF items were reprinted from other sources...the rule of three was usually more a Procrustean measure than a useful one, given how many other magazines and other sources have contributed mightily to the fields).

Todd, I posted my FFB a day earlier. It's a review of THIRD CLASS IN INDIAN RAILWAYS by Mahatma Gandhi. Thanks!

I haven't come across this one before Todd but you do make it sounds quite intriguing. I stared reading Neely with a tremendous rush of enthusiasm after finally finding a copy of THE WALTER SYNDROME, which is certainly a very tricksily plotted story (and by the sounds of things has a bit in common with this one too) and which I really liked. The same went for THE PLASTIC NIGHTMARE (I'm a total sucker for amnesia stories) - but then the next two, THE DAMNED INNOCENTS (aka DIRTY HANDS) and THE RIDGWAY WOMEN left me totally underwhelmed and I've never gone back. Perhaps time to give him another go - cheers!

I stumbled across THE WALTER SYNDROME some years back, never having heard of Neely nor realizing he'd had a sustained career in suspense fiction (TWS is easily his best-distributed novel over here), and it is a fine novel (even if, like all Neely fiction, it's no more afraid to wallow than Jim Thompson's, and in a more tricksy and less disarmingly frank way). I'm not sure THE JAPANESE MISTRESS is the one to start up again with...the revelations, which I'm hesitant to post even in comments without Spoiler Warnings plastered all over them, do weaken the book considerably in some ways, and make it an interesting challenge to the reader in others...and THE PLASTIC NIGHTMARE has been redubbed SHATTERED for most latter-day editions in the States, after the rather fizzled film version (I attended that in a theater, one of perhaps a few tens of thousands at most, for Greta Scacchi at the time, not having heard of Neely's involvement)(and for Scacchi fans it was no A MAN IN LOVE nor THE COCA-COLA KID, nor even THE EBONY TOWER, another example of rather less annoying tricksiness on John Fowles's part, that time).

SHATTERED! I went to see that when it came out (I hesitate to say it's all coming back to me) and actually I rerember quite liking it - very decent cast of course (Bob Hoskins as a PI-pet shop owner as I recall). La Scacchi was stunning in that (and went on record as saying how much she disliked having to do the love scenes - she's right to be annoyed but it absolutely made the movie 100% more fun for me!)

I read most of Richard Neely's books back in the Seventies. He could change styles the way most people change socks.

Was my previous comment eaten? Trying again. If it's a dupe feel free to delete, Todd. My FFB contribution is here.

The previous version of your comment fell into some sort of hole, John, but your link is posted now.

Hope to have mine up later today, perhaps very later. THE HYPNOTIC EXPERIMENT OF DR. REEVES by Charotte Rosalys Jones.

I did Part One of a two-part Edgar Box series. Certainly "Edgar Box" is a lot less "forgotten" than my choice for the series last week (I've only talked to one person who ever read Crime in Corn Weather). I thought I would mention, however, since I wasn't linked.

Didn't know if that was meant to be your FFB entry, Curtis...but it's up now.

Waiting for yours and Sergio's, if any, Jerry...if it's tomorrow, or not till next week, that's what happens....

There is a bit of a perverse thread that runs through Neely's fiction, though, George...Ed Gorman has put it in somewhat more Aristotlean terms, but it's there.

I, too, saw the movie version of SHATTERED. I think I picked it up for Berenger more than Scacchi.

I recalled this movie the other day after a mention about how fax machines are becoming obsolete.