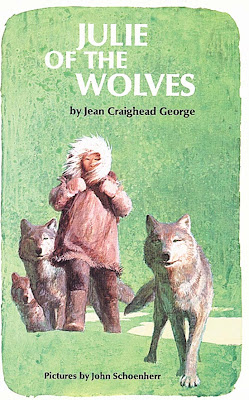 I had forgotten John Schoenherr had done the illustrations for this, the most important of George's books for me.

I'd never heard tht Dillards song before. It's strangely moving.

Yes...these aren't the best available examples of Summer's or Dillard's work, but they were interestingly relatively obscure examples I could find...the live reading of "She Works Hard for the Money" and the song and snippet from a concept album, no less, in a Van Dyke Parksish mood, from the Dillards. And Julie/Miyax was defintely working hard in and out of tune with the human society she had to face...

I used to like many of Summer's songs including "She Works Hard for the Money," "The Wanderer" and "Last Dance," which seem pretty tame now, as do most of Hindi disco music of the 70s and 80s which were cheap imitations of their US counterparts. I'll remember that period for Donna Summer, Laura Branigan and Whitney Houston, all gone now.

I only knew that song from Harry Nilsson's version and always loved the calliope on it. Is Summer getting the same attention lavished on more trainwrecked dead popstars? My timeline has been filled with an outpouring of happy dance memories.

I'd say public mourning for Summer is comparable to public chatter for, say, Houston. Tame, perhaps, Prashant, but heartfelt and her voice was one of the strongest, and certainly her song sense one of the best, of the disco performers...if Houston was Elvis Presley, prettier and with so much talent and so little consistent taste, then Summer was more of a Johnny Cash...not as pretty, but with a hell of a lot more sense and taste (though I don't know if Summer put herself through as many wringers as Cash did himself).

I can definitely see Nilsson performing that song.

The only time I tried sustainedly to ice-skate, in Hawaii no less, the Summer was a song I requested after a series of bad-for-movement/exercise songs had been performed. DJing by proxy. Keiko also noted that the skaters generally perked up.

Performed? Played out over the sound system, that is.