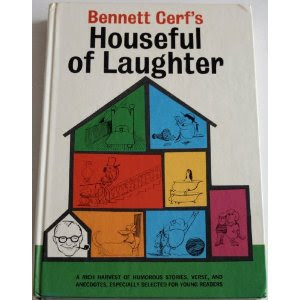 Gene Wolfe once wrote of "the book of gold"...a book, found early on, which launches a young reader into pursuing literature systematically...the gateway drug. I had a small library of gold (augmented with recordings of all sorts), but one of the key anthologies of my young reading was this best of Bennett Cerf's humorous books. Best because, unlike his collections of anecdotes, often secondhand (at best) or excerpted from others' longer work in the manner of The Reader's Digest and other magazines, this (while including a few aggregations of that sort of material for a few pages at a time) is a true anthology of humorous writing, including short stories, novel excerpts, memoir excerpts, poetry, examples of Roger Price's "droodles" (apparently "doodle/riddle" though I probably would've guessed as much out of "droll doodles" or "drawing/doodles"), and Walt Kelly's Pogo-cast version of "Chicken Little" for more elaborate graphic storytelling. It rather blew my doors off when I was eight, introducing me to nearly all of its contributors, and despite the kidsiness of some of Cerf's retold wit, it would stand up pretty well if I was to discover it today (see the index of contents below). A fair amount of chestnuts, then and now, such as the Tom Sawyer chapter, or the (admittedly then-newish) Norman Juster (without Jules Feiffer's illustrations but with Arnold Roth's added) or the O. Henry story; John Steinbeck's borderline horror story probably only occasionally has found its way into other anthologies aimed at children. And a fair amount of material, ranging from that of Stephen Leacock through Mac Hyman to Roger Price (and even Walt Kelly and Max Schulman and the latter's Dobie Gillis) which seems more obscure now than it seemed likely to become half a century ago when this book was assembled, or forty years ago when I first read it. (I borrowed it then from the Enfield [CT] Central Public Library; my new copy, bought used online, was due February 18, 1975, at the Brockway Memorial Library in Miami Shores, Florida.) There has been only one edition, this oversized hardcover (produced in the same dimensions and basic design as the young readers' Alfred Hitchcock's anthologies Random House was publishing at that time, almost all edited by Robert Arthur) was apparently never reprinted as a hardcover nor paperback. It's good to see some folks who would become more important to me in other contexts (Carolyn Wells, the light-verse poet and parodist, was also an early critic of crime fiction and an early annual best of the year anthologist in that field; I had yet to see a Marx Brothers film by the time I read this book, though I had seen syndicated repeats of You Bet Your Life; the films soon followed this reading), as well as to realize I went on to read more by almost everyone collected here (Billy Rose, not so much, even despite having a short story attributed to him in an early issue of Fantastic) very soon after reading this; another I didn't read much of, but experienced in other media, was of course Mac Hyman's character Will Stockdale, dramatized most famously by the recently late Andy Griffith. Access always helps; aside from the slight Mad Libs books, my major other exposure to Roger Price's work in the early 1970s was in the anthology from Mad comics he introduced, and perhaps one Droodles collection; Art Buchwald and Thurber and Twain and even Hildegard Dolson and Clarence Day were much more easily procured, the last two in Scholastic Book Services and similar (Bantam Pathfinder?) reprints of the books their contributions here were taken from.

According to WordCat, 226 libraries have held onto their copies of this anthology for all these years, and I can see why (I wonder how it circulates); I hope Brockway Memorial doesn't think they still have theirs. I'm tempted to ask them.

Index by me, for submission to the Miscellaneous Anthologies index online among the Contento/Stephensen-Payne indices.

illustrations throughout by Arnold Roth

For more of today's books, please see Patti Abbott's blog. (Thanks to Phil Stephensen-Payne and Dennis Lien for some factual assistance with this post.)
Posted by Todd Mason at 7/27/2012 09:00:00 AM

Yes, there are certain defining books read in our childhood. I am glad that for you this has stood the test of time.

I was amazed to read your comment at Patti's blog. Very generous of you to remember me after all this time. I'd love to be a part of FFB but I really don't know where to send the link. Do you all email it to her? Could you please tell me how to do it.

Hello, Neer, and thank you. Emailing her is good, and doing what you did in leaving her a comment is also a fine means of letting her know.

I've always wondered who wrote that limerick "A tutor who tooted the flute/Tried to tutor two tooters to flute..." I've known it for decades. Never knew it was Carolyn Wells! How 'bout dat? When I was a lad I had several riddle books "edited" by Bennett Cerf. One of them was a Pop-up. I bet you'd be hard pressed to find a single copy of that one these days.

FFB should do a tribute to children's books some day. I'd have a slew of them to pick from and the memories would be as fresh as if I had read them a day ago. Strange how books you read as a child stay with you for decades.

I often dip into that well (particularly as I began reading adult literature, in every sense I could find it, at a young age), and we've had at least one week, possibly two, devoted to young readers' books, obviously before you joined in...I suspect it could easily happen again.

I'd forgotten about Roger Price's droodles. They were priceless and still are. Thanks, bud.

I was a huge Arnold Roth fan when I was a kid. I have no artistic talent, but that didn't stop me from doodling faux-Arnold Roth cartoons on every sheet of paper I could find.

And I'm pretty sure this was my first exposure to Roth, and Price, and Walt Kelly, who had just died at that time or was just about to...

In the Evan Hunter book The Blackboard Jungle, the way the main character, Richard Dadier, finally begins to get through to his juvenile delinquent-ish students is by reading them "The Fifty-First Dragon". Dadier had mistakenly thought that the story was "The Fifty-First Dragoon" and that it would be about soldiers.

I was also eight when I received this treasury as a gift. At that age I was way too young to appreciate much of the humor, except for puns in the middle of the book and some bits early on in the first selection, Richard Armour's "It All Started with Columbus", for which my classmates (and also the English teacher) more than five years later had no stomach. Ironically this same class had earlier seen O. Henry's "The Ransom of Red Chief" as humor, but I saw it as tragedy because the plot unfolded seriously every day in my family and also because I would have had a 100% on the test had I not changed two answers before turning in my paper, so instead I got a "B" on the test, which resulted in a six-weeks "B", which resulted in a semester "B", the first of four that I would see in literature classes, thwarting my dreams of becoming valedictorian. Eventually the fifth of Roger Price's Droodles, "Rhinoceros in a Paper Bag", got me hooked on his set of seven.

Glad to trigger rich memories...sorry they are such a mixed set!