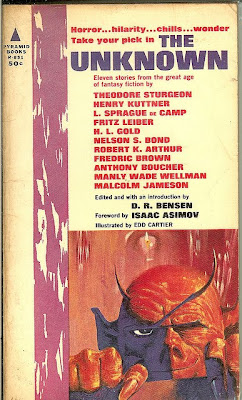 D. R. Bensen, the editor at Pyramid Books in the early '60s responsible for a number of their more interesting releases, was also the editor of this anthology out of Unknown Fantasy Fiction, later Unknown Worlds (in an attempt to drag in more sf readers)...and this slim anthology has become easily Bensen's best-known single work, and the best-remembered anthology out of John W. Campbell's fantasy magazine, a title probably even closer to that editor's heart than his sf magazine Astounding was (that magazine later entitled Analog, as it still is known today). For a relatively unadulterated sense of what an issue of Unknown was like, as Jerry House reminds us in comments, check out the issues of the magazine and the one-shot market tester Street and Smith issued in the late 1940s online at the UNZ.org project.

At left is the original edition's rather decent, if text-heavy, cover, and below is the less impressive 1970 reprint exterior (courtesy Bill Crider and his continuing series of back and front covers of paperbacks...note the clever misspelling of Fredric Brown's name on the back cover of this volume). In 1978, Pyramid having been bought by Harcort, Brace, Jovanovich, the line was redubbed Jove Books, and Jove put out an edition with a genuinely ugly, pseudo-pulp cover that had nothing to do with the kind of covers Unknown specialized in...and that cover is rather hard to find online, at least I couldn't this morning. That, however, is the edition I bought (when it and I were new), with Bensen's brief new introduction, appended to the original brief introduction, being the major reason to seek out this last edition (so far).

The 1970 reprint rather grandly suggests that these are the best stories published in the best fantasy magazine that has ever been...and while you might find a number of people agreeing with the second half of that clause (including Isaac Asimov in his preface), relatively few people would agree too strenuously with the first phrase...Bensen was making a point of collecting good, but largely overlooked, stories from the highly picked-over pages of the magazine, and succeeded...glance at the index below, and it's hard to go too far wrong with most of these contributors...but subsequent anthologies from Unknown that were less afraid to include the chestnuts are a better indication of why the magazine, which specialized in the kind of impudent (but not completely lighthearted, as Asimov notes) contemporary fantasy written by Thorne Smith or H. G. Wells, whose dictum that only one miracle per story should be allowed was followed pretty closely, the kind of fiction that has in the last decade or two has often been tagged "urban fantasy"...and the magazine was founded in part to house the kind of near-science-fictional paranoid speculation of such work as Eric Frank Russell's Sinister Barrier.

But Unknown ranged pretty far afield, from Fritz Leiber's best early work (including the novel Conjure Wife, the definitive "urban fantasy" "Smoke Ghost," and the first published stories of Fafhrd and the Gray Mouser, the sword and sorcery anti-heroes who were easily the next step beyond Conan and even beyond C. L. Moore's contributions to the form...and which John Campbell bought, reportedly each time with the puzzled query as to why Farnsworth Wright at Weird Tales wasn't buying them instead (a very good question, and probably more to do with Wright's many blind spots than anything else, even if most of the best F&GM stories would come in later years--"The Bleak Shore" collected here is a good example of the early stories). "Yesterday was Monday" is a typically well-worked out paranoid "behind the scenes of reality" story from the young Theodore Sturgeon, who, even more than Leiber, was able to do his best early work in the pages of this magazine; Henry Kuttner's "The Misguided Halo" is similarly an example of Kuttner's deftness with the single humorous fantastic element introduced into an otherwise mundane situation. L. Sprague de Camp's "The Gnarly Man" is a fine example of the almost-sf content of the magazine, depending just a bit on magic-science in positing the legal trouble faced by a nearly immortal Neanderthal in the turn of the 1940s US; H. L. Gold's "Trouble with Water" is simply the best story I've read by Gold (and many others suggest the same), a busy writer before World War II who channeled his war-damaged psyche and considerable talent and energy into editing the revolutionary and often brilliant Galaxy Science Fiction and Unknown-like Beyond Fantasy Fiction in the 1950s. Manly Wade Wellman, Fredric Brown, Robert Arthur (ISFDb says, in this case, in collaboration with Fredric Brown, uncredited), Anthony Boucher and the others are represented with fine examples of their contribution to the magazine (and Arthur and Boucher would, in their subsequent editorial efforts as well, seek to publish similar material to that which Unknown and, increasingly, Weird Tales under new editor Dorothy McIlwraith would publish)...which, after being folded by Street and Smith in the face of WW2 paper restrictions on all publishers, lived on as a stronger thread of science-fantasy in Campbell's theoretically all-"hard" sf magazine, which would also explore, increasingly, fringe science in both fiction and supposed (at times) nonfiction contents (crackpottery would be mixed in with utterly responsible nonfictional pop-science coverage in Astounding and Analog throughout Campbell's career and at times beyond; long-term fanzine and fiction-magazine editor George Scithers would note as early as the turn of the 1960s how badly-researched even some of the attempts at sober science articles were, in interesting distinction from Analog's less-"hard" sf rivals, Galaxy and The Magazine of Fantasy and Science Fiction, which at the time had regular and scrupulously researching/self-correcting columnists in Willy Ley and Isaac Asimov, briefly supplemented by Ted Thomas, respectively).

For more of today's books, please see Patti Abbott's blog. My review of the sequel anthology, The Unknown 5, which Bensen edited and saw published in 1964. 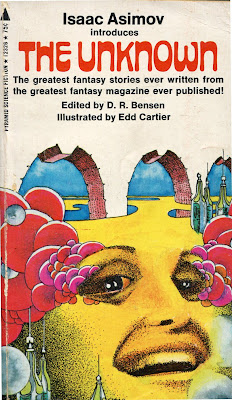 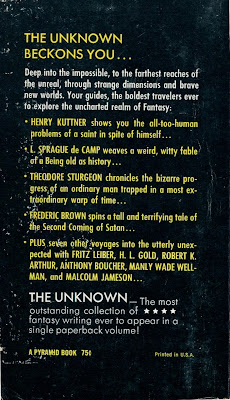 One of my first introductions to the field. The Leiber and the Gold stories knocked me out. The book sent me searching of more works by all the authors there.

How'd you come across it, Jerry? What made it stand out for you on the drugstore rack, or where you found it? Did you ever read the story notes Gold wrote about his, in that collection I haven't yet obtained, but Damon Knight quoted wistfully, wishing Gold might invest more of his work with the sense of life demonstrated there?

Like Jerry, THE UNKNOWN was one of the first books I read that introduced me to fantasy. I loved the cover on that paperback. It jumped out at me from the book spinner (remember them?). I agree with you on Gold. An underrated writer.

I used to have a few of the revamped and final UNKNOWN pulp magazines from the 40s before I was forced to sell them out of finanicial need. I'm glad to know some of the best stories are in this anthology which I will go hunting for very soon.

BTW - I found the Jove paperback cover, Todd. Ludicrous! If you want to lift it and add the image, go here.

Meanwhile, while Bensen in his two anthologies does a good job in avoiding the previously reprinted (and THE UNKNOWN 5 includes an Asimov story that had been in inventory when UNKNOWN WORLDS folded, and hadn't been published till that book was issued in 1964), other anthologies from UNKNOWN have not been afraid of including the widely-reprinted, to their benefit...though if no anthology has managed to quite represent WEIRD TALES, none has managed to definitively capture UNKNOWN, either...Aside from a good selection of UNKNOWN fiction in THE RIVALS OF WEIRD TALES, Stanley Schmidt's two anthologies, the short Baen paperback UNKNOWN and the instant remainder hardcover, edited with Martin Harry Greenberg, UNKNOWN WORLDS: TALES FROM BEYOND, have more of the actually best stories from the magazine...as well as overlapping heavily with each other and the Bensens, and with the Street & Smith magazine-format newsstand antho they issued after WW2 (1948), FROM UNKNOWN WORLDS, edited by JWC, who clearly hoped to relaunch the title. (The Brit edition of that, from Atlas, was issued in hardcover as well as paperback, apparently, four years later). TOCs in next comment (or 2), as they make this comment too long for Blogspot parameters!

George: sadly, too much of Gold's fiction was simply too artificial, though his best aside from "Trouble" is further evidence of a man who, as Algis Budrys once noted, knew too many tricks of the trade. "The Man with English" and a few others were nearly as good as "Trouble," but too often he'd publish slick, relatively empty stories...of his own, I mean, as opposed to the more minor work his later issues of GALAXY might feature.

From ISFDb (it took 3 comments):

I have this one, or had it, bought new at the small book store that had tons of SF paperbacks not too far from where I lived. Or maybe I got it at that used book store near another town I lived in... I can't recall. Anyway it's been read, and enjoyed most but not all. Can't say which was which at this distance, though.

The Bond, as I remember, not having re-read it, is a pretty low point in the book...but not insufferable nor painful to read. The Brown (the one attributed to Brown!) has always struck me as overblown, if clever enough.

"though if no anthology has managed to quite represent WEIRD TALES..." Really?

I think two of the August Derleth edited collections (SLEEP NO MORE and WHO KNOCKS?) do a fine job of capturing Weird Tales. They even include artwork by WT regular Lee Brown Coye. Granted they also include non-WT writers and stories, but the bulk of them debuted in the pulp.

Thanks for making the UNKNOWN anthology bibliographies easily accessible on one interweb page.

...give a sense of the magazine, but all of them fail to get across all the magazine could be at its best, and the essential flavor of the original run as it shifted and changed (much less the revivals, which add several new wrinkles). The NOT AT NIGHT series of UK anthos and Dashiell Hammett's CREEPS BY NIGHT also reprint heavily but not exclusively from WT, but they don't quite get it down, either.

And I did miss one notable UNKNOWN anthology:

...and I missed the misspelling of Fredric Brown's name in the contents listing there. Wow. Well, they got Frederik Pohl right, anyway.

Indeed, a whole lot of the best work in those two Derleth athologies is, oddly, the non-WT stories...they probably had to glow brighter for him to want to include them...

UNKNOWN is a big favorite of mine and I have all these collections. I've owned several sets of the magazine over the years and at present I have a loose set of the 39 issues in nice condition and also a bound set that was owned by George Scithers. It's signed by Campbell in the first volume.

When I first received a set of the magazine in 1960 from Gerry de la Ree, I paid $50 for it. I then read all 39 issues, every story. I don't believe that I can say that about any other magazine.

I can beat that for a bargain, but I lucked into it...the two copies of the two issues of UNKNOWN WORLDS I own, both in g/vg condition, were purchased at a magazine store for $5 each, in 1998. Insane. But not upsetting.

I think F&SF during certain periods averages even better than UNKNOWN, and BEYOND and CRANK! and WHISPERS might as well, but relatively few magazines have left such a legacy in such a short run (39 issues).

For those unfamiliar with the magazine (and for those who are), twenty-eight issues, plus the FROM UNKNOWN WORLDS anthology, are available online at unz.org.

Thanks for the reminder, Jerry! I should put that in the body.