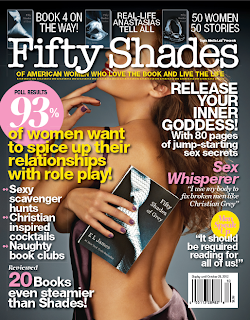 Topix, a company that specializes in one-shot magazines that mine the same audiences as Women's Day or Cosmopolitan or Women's Health and People (audiences that don't completely overlap, of course, though they aren't dissimilar), has put out a one-shot (money shot?) issue meant to reach E.L. James's audience...Topix isn't alone in producing this kind of magazine, but they are currently (and probably not for long) alone in having released one that is so simultaneously Just Like every other "service"-oriented one-shot in content (this one has aerobics tips and those for exercises with a kettle-bell weight...for rump-tightening, doncha know, and thus spanking preparedness, as well as "Eat Like a Goddess!"--heavy on the veggies, but also chocolate and oysters--and mixed-drink recipes and party-conducting and online flirting suggestions) and those not quite fitting the topic at hand, but seen as probably appealing to the same audience (a brief and teasing account of the activities of a sex surrogate working with a psychologist who specializes in men's sexual dysfunction--the surrogate being the "Sex Whisperer," no less), along with items that actually have something to do with the romantic erotica novels themselves...a survey of brief reactions to the books by apparent women readers of varying ages and life-partner engagements, sex toy suggestions, a reasonably intelligently-conducted interview with a woman medical doctor who's a sensible, grounded sexual submissive (but who might have some problems going forward, as she notes, as she leans toward lifestyle submission, and it can be tough to be someone necessarily in charge to an important degree in one aspect of life and then, however desirable it might feel, subject to the utter domination of a partner in private life--of course, lifestyle doms and subs have even more negotiation ahead of them than do more strictly sexual D/s folks, unless they make a point of avoiding negotiation altogether). Another featured interview seems less helpful for newbie explorers...a woman who dabbled in submission and dominance seems to suggest, for example, that one can't have bondage play without inflicting pain...a bit like saying you can't have peanut butter without beer. But one hopes the readers can figure that out.

And they had the wit to go get literary recommendations from Rachel Kramer Bussel, which include Tropic of Cancer and Fanny Hill along with Fear of Flying and Emmanuel (and Venus in Furs and an Alison Tyler novel), but omit Story of O, which seems a bit odd...perhaps in hopes of not scaring anyone off (the "Pauline Reage" novel verging, as it does, on horror).

So, it's a rather goofy but not so much sleazy as chirpy a production, with its sparse ads split rather evenly between other Topix magazines (Celebrity Astrology, Reality Stars: Where Are They Now?, TV's Greatest Judges) and sexual-aid dealers (Adam and Eve, Xandria, Masque dissolving flavor strips--sold as an aid for women who don't like the flavor of men's funk or semen, but I suspect that they might have wider application, for those unfortunates who really hate the flavors and/or scents of their partners...presumably even after bathing). Though there is at least one other ad in the text, a rather sad further attempt by Bret Easton Ellis to campaign to write the script for a film adaptation...his tweet is quoted: "'Why are you reading that mommy porn again?' a follower asks. 'You're better than that.' [Ellis:] Thanks, but, no, I'm not." I haven't read any of the Gray fiction, but having read some Ellis, I'd hazard that Ellis is being a bit generous to himself here.