The episode of SONS OF ANARCHY no one wanted to see: 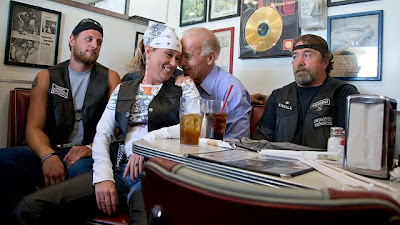 SEAMAN, Ohio - Vice President Joe Biden cozied up with a female biker during a stop today at Cruisers Diner.

The Associated Press snapped this photo of the vice president sitting behind a female biker while he talked with her and two other male bikers looked on.

According to the campaign, the bikers were part of a group called the "Shadowmen," but there were no other details on who the female biker was or what sparked the conversation between her and the vice president, because the pool had been escorted out of the diner before the encounter.

When Biden entered the diner, he approached three diners seated at a counter and asked if he they'd lend him one of their motorcycles, according to the pool report.

"Can I borrow one of your bikes? They don't let me ride anymore," Biden said.

"Probably not," Jeff Cook, one of the diners, said.