FFB: THE AVON BOOK OF MODERN WRITING (1953) and No. 2 (1954) ed. William Phillips & Philip Rahv, among other "paperback magazines"/periodical books 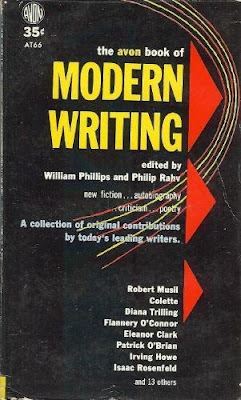 In 1953, Avon Books decided to join in on the "literary magazine of original content in paperback format" fun already in progress at least at New American Library's Mentor line, with their New World Writing, and at Pocket Books, with their slightly younger series of anthologies, Discovery, edited or co-edited for six volumes/issues by Vance Bourjaily. Avon more than most publishers played both the digest-sized magazine and paperback book sides of the fence simultaneously in the 1940s and into the 1950s...along with Murder Mystery Monthly and Donald Wollheim's Avon Fantasy Reader and Avon Science Fiction Reader (later merged as Avon Science Fiction and Fantasy Reader in a fit of creative energy), Avon both assembled, and reprinted others', anthologies and collections of contemporary mimetic fiction, and published them both in and out of the Modern Short Story Monthly sequence of arguably books, arguably magazine issues, including publications collecting short stories of authors such as Louis Bromfield and Somerset Maugham, and anthologies such as the one edited anonymously for (UK) Faber hardcover publication in 1929 as My Best Story and reissued by Avon in 1942 as The Avon Book of Modern Short Stories. 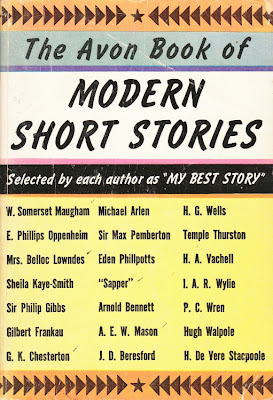 But, by 1953, with "mass market"-format paperbacks clearly making greater inroads in the market (this was the format favored by such industry leaders as Bantam and Pocket, after all), and the Mentor and Pocket "prestige" anthology series noted above already launched, Avon recruited Partisan Review editors Phillips and Rahv to select a mix of fiction, essays and criticism, and poetry for Avon's own entry into this sweepstakes; the first volume was highlighted by first publication of Flannery O'Connor's "A Good Man is Hard to Find", along with critical material by Diana Trilling and Irving Howe, other fiction by Robert Musil and Robie Macauley and others, an excerpt from Colette's memoirs, and Lysander Kemp and Barbara Howes as two of "Six Poets" featured. The packaging fell somewhere between the ugly but functional early New World Writing covers, which would list their volume's entire contents, and the somewhat Mondrian-influenced covers favored by the Pocket Books series (please see below). Mentor's self-congratulatory tags--"Good reading for the millions"--were not as much in evidence on the Avon volumes, perhaps in part because Avon was never as invested as NAL in snob appeal, even with this project, seeming as it did like a beefier and much better-distributed version of the editors' typical issues of Partisan Review. 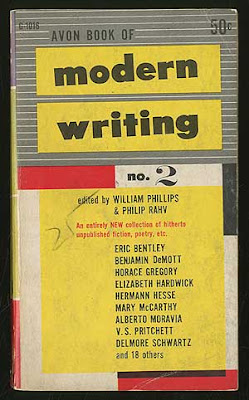 The second volume/issue of the Avon, despite apparently selling a decent but unspectacular (by early '50s paperback standards) half-million copies between them, would be the last for Avon, and featured an even more impressive lineup of fiction, including first English translation (by Anthony Kerrigan) of Jorge Luis Borges's fantasy "Funes the Memorious", an excerpt from Mary McCarthy's The Group, and work by Herbert Gold, Delmore Schwartz, Alberto Moravia and Elizabeth Hardwick (and a memoir by Herman Hesse, and critical writing by rightwing icon Hilton Kramer) among many others. (As noted, Pocket had pulled the plug on Discovery after the sixth issue/volume, in 1955, after two years; New World Writing would continue to appear from Mentor till 1960, with an improving set of covers eventually, then from 1960 through 1964, beginning with the 16th issue/volume and ending with the 22nd, NWW would be published in a paperback line J.B. Lippincott might have created for that purpose.) Aside from such smaller publishers' periodical books such as New Directions, from the imprint of the same name, or such no-bones-about-it magazines as Evergreen Review, the paperback publishers would limit themselves to one-shot original anthologies in contemporary-mimetic fiction (such as Lion Books had done in the early '50s) till the latter '60s, and NAL, this time through the Signet imprint, getting back into the market with New American Review (and competitors of sorts such as the Book of the Month Club's Works in Progress--and it's notable that NAL would let New American Review go, as well, to be published first by Simon and Schuster [though not as a Pocket Book, amusingly, Pocket having been an offshoot of S&S and reunited as its primary paperback line in 1966, but as an S&S Touchstone imprint offer], and then, after several years, by Bantam as American Review).

Not yet seen by me (but now on order) was the third volume, which in the frequent tradition of such things skipped houses on over to Berkley, to become The Berkley Book of Modern Writing, for its last issue/volume. 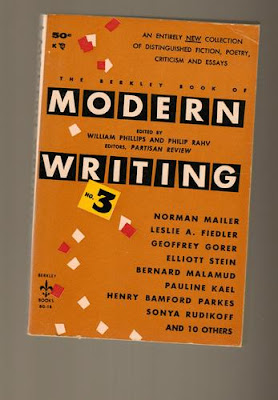 So, it's probably a pity that no more Avon (or Berkley)/Moderns were issued, but anything slated for a fourth volume presumably appeared in Partisan Review instead...and at least these, and their Pocket and NAL counterparts, were reaching for a period in the early '50s an audience at least fifty times greater than those of such little magazines as Partisan or Hudson Review or The Paris Review (founded at about the same time)...while Ballantine Books did something similar with Frederik Pohl's Star Science Fiction series, and a very few others flourished (I'm not aware of any similar western series, for example, and such British annuals as Winter's Tales and Winter's Crimes, beginning in the latter 1950s, had rather haphazard penetration of the US market....) 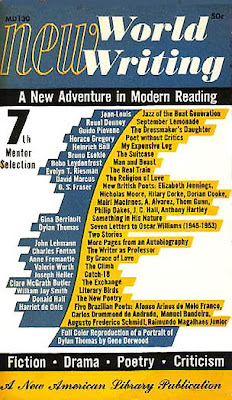 #7 was the most legendary of issues/volumes of NWW, featuring working-title excerpts of Catch-22 and, as by "Jean-Louis", of On the Road. 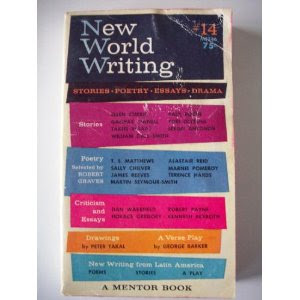 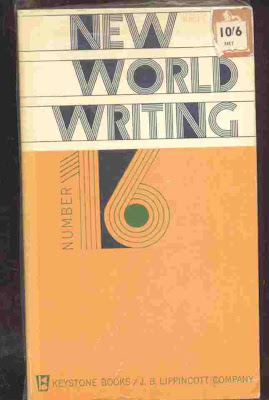 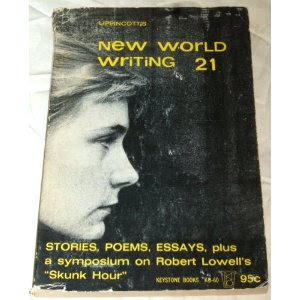 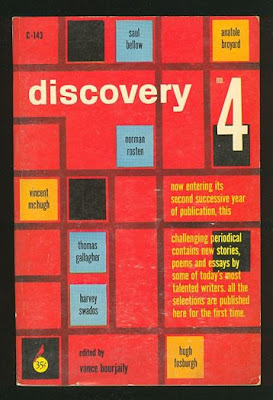 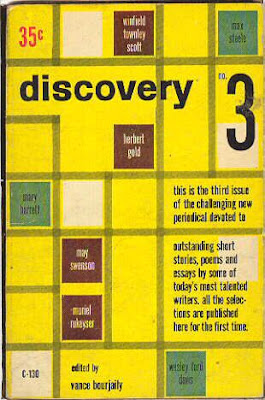 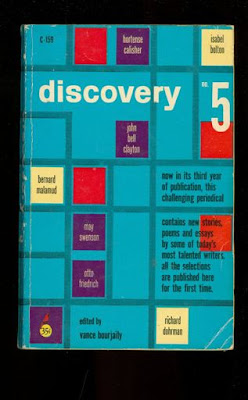 ***It's also notable, to me at least, how much scrambled information there is online and in print about these series, with at least one source insisting that New American Library/Mentor published New World Writing through 1964, another that NWW folded in 1959 (Mentor's last volume, and Lippincott's first, appeared in 1960); information on Discovery and the Avon/Berkley Book of Modern Writing trio might be less inaccurate, but that's mostly because there's even less of it... 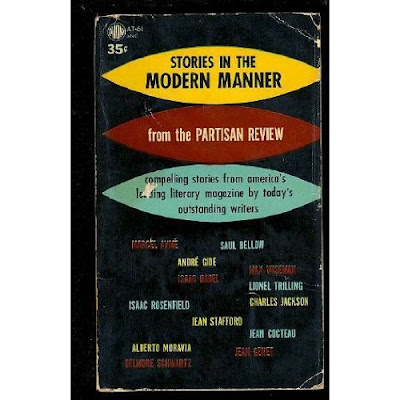 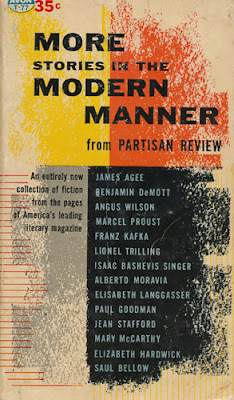 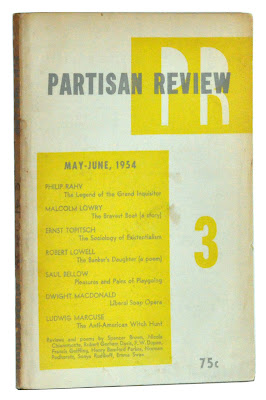 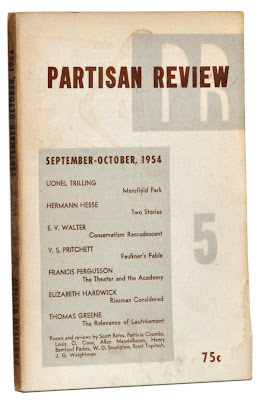 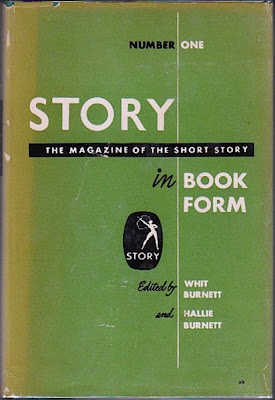 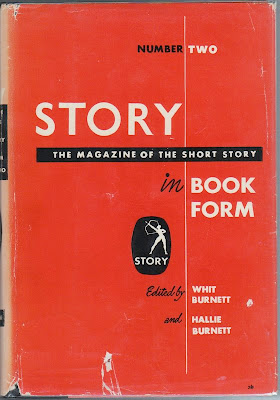 At bottom, Partisan Review and Avon books from PR from 1953-54; then, two of the four volumes of Story magazine's early 1950s parallel adventure in book publishing, apparently, much as with Whispers magazine and anthology series in the '70s and '80s, the Story volumes might've mixed new fiction with selections from the magazine issues...and they were published by Ace Books owner A. A. Wyn, possibly in tandem with David McKay for the first volume...
Posted by Todd Mason at 9/14/2012 08:44:00 AM

We will never see books like this published by the Majors. Maybe some small press might try it, but that's about it in this ebook happy market.

Well, they jumped in in the early '50s, and again in the late '60s, and these days there's an efflorescence of Best of the Year annuals (about half from large commercial houses, half from smaller presses)--albeit Houghton Mifflin by itself is responsible, with its BEST AMERICAN series, for about 3/4 of the big commercial house annuals.

But, yes, not much in the way of "bookazines" these days from the larger houses...just some (often well-designed) newsstand littles supplementing the veteran fiction magazines, and increasing numbers of webzines and now tabletzines...