I have been reacquainting myself with a number of the important nonfiction books of my youth (important to me, anyway...the best kind of important book) and will probably comment soon on the Peter Nicholls anthology of transcribed speeches, Science Fiction at Large, perhaps along with the earlier not dissimilar The Science Fiction Novel: Imagination and Social Criticism by Bloch, Kornbluth, Heinlein and Bester (with an introduction by Basil Davenport, who is sometimes listed incorrectly as editor) and also with Kingsley Amis's also similar New Maps of Hell thrown in...and maybe on the Lupoff & Thompson anthology All in Color for a Dime... 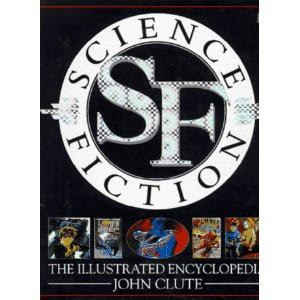 All of these references, most of which don't have enough room to cover the breadth of their subjects sufficiently (the Tuck, which intentionally cut off coverage at 1968, and the two Nicholls books being the closest to having the necessary amplitude), are of course cursed with the other two primary problems of reference works about the arts: what to leave in and what to leave out, and the attempts to incorporate the facts with some critical sensibility, to help determine the importance and quality of the work in question (in references about the sciences, and other matters closer to objectivity, these two problems are more like one problem).

So, this book, produced for the Dorling Kindersley line of massively illustrated, usually coffee-table books (preferring photographs, as much as possible), was an interesting problem all around...how to produce a handsome, easy-reading, eye-catching gloss on the unillustrated 1993 Encyclopedia, that might supplement that work in a sense, as well as get across the flavor of the work in question...and follow in the better tradition of David Kyle's The Pictorial History of Science Fiction (one of my choices last week) and not the worse of Franz Rottensteiner's The Science Fiction Book or Ed Naha's The Science Fictionary...there's the rub. And while this volume picked up the 1996 Hugo Award for best nonfiction volume, it's not a complete success, though perhaps about as good as could be hope for given the restrictions on it.

It had to be colorful and, as noted, to feature as much photography as possible...this unfortunately lead to the selection of sometimes rather random film and other A/V still images, even to illustrate the short entries on the fiction writers whose work was adapted by the films the stills come from...the rather unfortunate makeup job on the character with a prosthetic face from the film adaptation of Algis Budrys's Who? thus dominates the entry on Budrys, a less goofy but still not altogether impressive image from the 1984 film of Dune dominates the entry on Frank Herbert, and so on. The proofreading, perhaps particularly on the captions, was not quite what it could've been...a citation for Asimov's SF Adventure Magazine, the shortlived space opera sibling of Asimov's Science Fiction, is given as having lasted one issue, when it actually ran for four quarterly issues...and in a volume which completely ignores Fantastic and any number of other magazines, making a point of mentioning ASFAM seems oddly random (even if it was to make the point that not all Asimov ventures had been moneymakers). 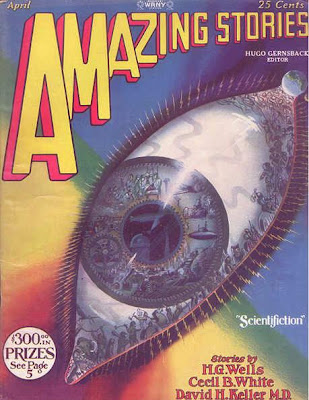 But it does present a lot of good visual art, and reasonable entries on the writers, themes and other matters covered (and while the timelines that run throughout the book are actually a step down from the quality of the timeline section in the Ash book, they are still helpful in providing some context, if a bit redundant at times when joined with the entries, such as the citations of R. A. Lafferty in both contexts). It is not and never should be considered a replacement for the 1993 (or 1979) Encyclopedia, which is getting a new edition, but it is an enjoyable book to page through, and like the Kyle it does pair some striking imagery with sensible text. 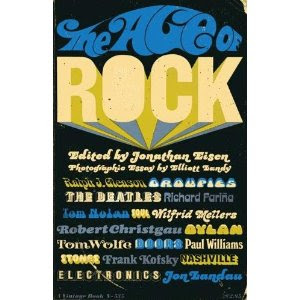 My copy of The Age of Rock just arrived yesterday, so I've barely had time to reacquaint myself with this, one of the first if not the first anthology of critical pieces to be published by a non-specialist publisher (perhaps by any), but the range of the writing assembled here, from the likes of Harry Shearer, Murray Kempton, Lenny Kaye, Sally Kempton, Paul Williams, Nat Hentoff, Ralph Gleason, and Richard Fariña on through Tom Wolfe and Joan Didion to Richard Meltzer, gives a sense of the attempt to be thorough within its compass (this 1969 book is subtitled "Sounds of the American Cultural Revolution" and it does favor the leftist press...though I suspect the rightwing press wasn't publishing too many critical appraisals of rock music, so much as condemnatory rants, in the '60s). Dave Marsh never liked it much, and it's missing any contribution from Lester Bangs (who really got going at the end of the decade), but it inspired some thoughts in me when I read it some thirty-plus years ago...Donald Wollheim's Very Slow Time Machine, our lives, hits home...
Posted by Todd Mason at 4/08/2011 10:30:00 AM

In my opinion, Clute is THE MAN whenit comes to SF reference. My copy of his The Encyclopedia of Science Fiction (with Peter Nicholls) and The Encyclopedia of Fantasy (with John Grant), are must have volumes for any SF-F reader and fan. This one is more fun to look through because of the illustrations (okay, the pictures) but the other volumes have the detailed goods.

Which is, of course, as you say. It's my understanding that the Encyclopedia new edition will be digital only. Too damn bad, but I understand the economics of it, especially after John explained it to me.

Rick: Yes, the 1979 ENCYCLOPEDIA particularly was a bolt from the blue, particularly as I was able to pick it up as a remainder in 1980 for something like $3. Clute is both committed and a good critic, though the participation of the other folks I cite as co-editors and contributors (among many other contributors) shouldn't be slighted.

George: You mustn't forget such progenitors as Damon Knight and James Blish (as Rick might be the first to suggest today), and Knight always credited Frederik Pohl for inspiring him. Algis Budrys, Joanna Russ, Avram Davidson, Fritz Leiber, Ursula K. Le Guin, and others have carried on the tradition.

It's no accident that all of the above, with the exception of Pohl but including your citations, have published literary-critical work in THE MAGAZINE OF FANTASY AND SCIENCE FICTION, as did such columnists as Tony Boucher (with and w/o Mick McComas), Alfred Bester, Judith Merril, and a number of others (even Alexei and Cory Panshin contributed a clumsy column or so in the '70s, and Richard Delap was more enthusiastic than good, but not bad). (Charles Beaumont was the first film columnist for the magazine; William Morrison contributed an infrequent stage drama column in those years.)

And, of course, Fritz Leiber also conducted a litcrit column in FANTASTIC in the 1970s, as well, along with his extraliterary jottings in FANTASY REVIEW.

But who is the leading critic of SF today? You could be, Todd.

If I wrote better (and more) and had time to read more, I might take a shot at it...and land somewhere in the pack. You haven't done too badly yourself over the years.

Elizabeth Hand, who presumably can reach across the bed to Clute fairly frequently, is one of our best at the moment; I wonder if they challenge each other even if not at all actively, particularly she to write more crit, he more fiction (he didn't publish a novel till APPLESEED, iirc [a big if, I should check], well after their affiance began). Jonathan Lethem is trying to be too cute, but when not doing so, shares some well-informed insight. Richard Lupoff and Gahan Wilson are tailing off in such activities. Damien Broderick is both playful and incisive. Norman Spinrad still does some good work these years for ASIMOV'S. Farah Mendlesohn is certainly one of the better academic critics.

Who might you put forward? If Barry is your final answer, I couldn't and wouldn't argue too strenuously.

Well, there I go...I'd have to keep up a lot better, too. APPLESEED was actually a decade back, before Hand and Clute became a public item, and, paraphrase, his first novel in more than twenty years.

Wow, the decades are rushing by, no?

Yes, I would go with Barry Malzberg. Sadly, there really isn't a forum for SF criticism. I slip some in (like you do) on my blog. But I can't imagine a publisher putting out a book of SF reviews in this era. Not even a university press.

It would be interesting to know what, if anything, The Age of Rock book says in regards to electronics, stereo equipment and recording technology.

George: Well, both Joanna Russ (Liverpool, uni) and John Clute (Beccon, small press) have had collections out in the last five years, and Barry was even able to place his BREAKFAST IN THE RUINS with Tor, which means that his went out of print very quickly...and F&SF still offers a forum, as does ASIMOV'S, even if F&SF's variety of titans in the field in the 1970s is unlikely to be surpassed soon...and there remain critical journals of varying degrees of consistency and quality. And such associational works as Kate Wilhelm's STORYTELLER continue to appear...though not enough.

Rick: It's mostly about the esthetics and the social import of rock music, and has no index, so I can't quite tell where the passing references to techology and recording techniques are, aside from the references to Stockhausen and Varese in the survey articles and particularly those on Zappa and to some extent the Beatles...

Rick--Last night I reread Ned Rorem's contribution, which is amusing both for the provocative suggestions about the state of music generally and for his misapperceptions about how the Beatles wrote their music (he assumes that McCartney wrote all the music and Lennon all the lyrics in their collaborations, for example).