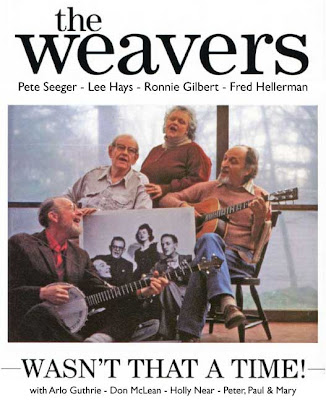 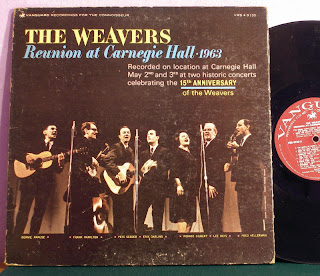 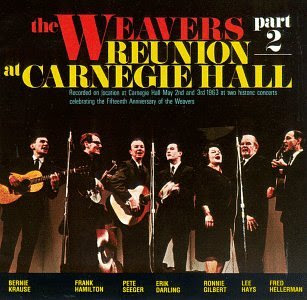 In 1963, to mark their 15th anniversary as a performing unit, nearly all the Weavers (and all seven who'd recorded together...one Jackie Gibson had apparently tapped out almost immediately after formation in 1948) came onstage at Carnegie Hall for a second series of concerts, the first after a 1955 reunion concert to spit in the face of a McCarthyite blacklist of the diversely leftist band...after being the biggest hitmakers in the history of pop-folk music from 1948 to 1952, the unabashed Communist affiliation of Pete Seeger and Fred Hellerman was a very useful means of chasing them out of their Decca Records contract, off the charts and off the scene. But reform they did, and began recording for Vanguard Records, to their mutual benefit, both live and studio albums, and then Pete Seeger decided he wanted to leave the band, strike out on his own again...leading to his first replacement, the relatively slick but also rather dull Erik Darling, who would soon leave to be a solo act, then form The Rooftop Singers (their one hit being the bowdlerized "Walk Right In"), then the rather more congenial Frank Hamilton, and then for the final year of band's run, young Bernie Krause came in. The 1963 concert is thus almost the end of the band as a regular working unit as well as We're All Together Again for the First Time, and a fine set of songs it is, except for Darling's fairly dull solo "Train Time" (the man had chops on his instrument, but not a whole lot of charisma nor apparently much sense of the importance of the band he joined...to be fair, to be the New Seeger in the band was probably a bit more daunting than being, say, the New Pete Best). Despite such impressive predecessors as the Almanac Singers (which had included Seeger and Hays at times, along with Woody Guthrie and others), the Weavers basically created the commercial space for folk music in the marketplace, and the folk "revival" and efflorescence of the 1950s and later owes at least some debt at every level to what the Weavers did...

The Weavers in the first flush of their commercial success: the "Around the World" suite:


Also, no film or video footage exists of the 1963 concerts (as far as I know), but one of their best gospel numbers throughout their career is this:


Meanwhile, Pete Seeger, seeing that his old songwriting partner (and occasional Ellery Queen's Mystery Magazine contributor) Lee Hays was going into a final spiral, gathered the original four together again for another reunion concert, an album and film, Wasn't That a Time, which will also be popping up again on PBS stations in early March in the US as a pledge-drive incentive:

Meanwhile, you can do worse than to gather these albums, and the documentary footage...few people, certainly few bands, have had such an epochal influence on those who followed.

The Rooftop singers also has a minor hit with "Ring-Tailed Tom", which sounded the same as "Walk Right In".

Folk music today would be much different if it weren't for The Weavers. A great group. And Ronnie Gilbert's voice still gives me chills.

One of my favorite groups.

Mine, too, Bill...and it's amusing to hear the range of contexts the Decca recordings are in, ranging from Gordon Jenkins Orchestra big-band charts (for the likes of "Wimoweh") to the very spare, just their own instrumentation of "Follow the Drinking Gourd"...

Thanks, Jerry...I've heard the title, dunno if I've heard their version of that. They really did create the commercial category of folk music, as almost all of it had been treated as country music or something similar before their advent...and they inspired skiffle artists in Britain and others around the world, as even a cursory glance at the videos associated with their recordings on Google and elsewhere demonstrates...there simply wouldn't've been so many folk and pop/folk bands without them, or at very least far fewer would've been recorded nor widely offered for sale...the Newport Folk Festival and its imitators seems unlikely to have happened...

Thanks, Scott. I do think the 1963 albums are probably their best concert recording, even with the Darling longeur.

THE WEAVERS sound was unique. Today, it would have to be supplemented by a drum-machine and some techno-glitz for my students to be interested in their music.

You might be surprised...though I'm not sure who's the "hottest flavor" in acoustic music at the moment...and, certainly, radio in 1949 and '50 wanted Gordon Jenkins behind them...

I don't think I've heard them before. Good stuff,though.

Paul, I don't know how widely-distributed their music was in Britain...but it's clear the skiffle bands were certainly highly influenced by their eclecticism and even tended to pick up on their song choices...certainly, the Springfields' discography, for example, shows a band that was listening closely to the Weavers.

I just saw the documentary about The Weavers' reunion at Carnegie Hall a few weeks ago in class. Terrific documentary and great group of musicians. That was the first time I had heard of them.

Yep, that's the one that will be distended by pledge breaks on a PBS as embattled by GOP fringers (and undefended by Democratic milquetoasts) as the Weavers were in the McCarthy era...the band that put Leadbelly and Woody Guthrie on the charts, the Lee Hays and Pete Seeger who wrote "If I Had a Hammer"...

I grew up with The Weavers and I sing along to this album when I was a eyoung kid. I'm now 20 and even though the weavers are way before my time They are my favorite folk group ever. Who can resist Ronnie's chilling voice and their Harmonies. The Carnigie hall album from 1960 with Erik darling is also good too. its to bad the other people of my generation don't know who the weavers are ..... SIMPLY GREAT

There simply hasn't been another cohesive folk group that has been their equal, though there have been others that have carried on the traditions, in various ways, or usually in narrower focus (ranging from Mike Seeger's New Lost City Ramblers to Sweet Honey in the Rock to any number of pop-folk people, so many of whom became folk-rockers in the wake of the Byrds and Dylan's embrace of rock).