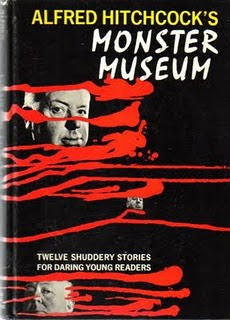 As I'm slowly gathering up decent reading copies of all the "Hitchcock" anthologies, I just received my new copy of this, the first of the hardcover YA anthologies I've purchased (I had only read library copies and infrequently read one or two of the rather pointlessly abridged paperback copies previously), and so revisit this one after two years for FFB purposes. First off, what a fine book this is, with the generally handsome (and appropriately sinister) Earl Mayan illustrations and design running throughout, and a judicious selection of magazine fiction...if I hadn't been primed to love fiction magazines by early experience of them directly, anthologies such as this one might've done the trick by themselves.

Excellent choices by geniuses such as Benet and Wellman (one of the most resonant of his John the Balladeer stories), Bradbury and his mentor Sturgeon, and St. Clair...Miriam Allen deFord and Benet both represented by stories wherein there's some confusion as between human and dog and human and cat, but in such various means...and you simply, neither now nor in 1965, see too many reprints of Paul Ernst's work, a man who wrote solid, memorable stories such as this (about small humanoid creatures so dense they walk through the matter of the Earth as we might walk through water), even as questionable as the physics involved might be (it was in a 1936 issue of Thrilling Wonder Stories rather than the somewhat more rigorous pages of a 1943 Astounding or even Sam Merwin's TWS of 1949)...Ernst wrote a lot of shudder pulp after and probably along with this story, and probably is remembered now, when at all, mostly for that (late bulletin: a little engine-searching turns up the datum that he might well be best-remembered for writing the lead novels for the hero pulp The Avenger). (One of the stories, along with the Endore, bumped from the paperback reprint...did the paperback editor see it as dated--it refers as a 1936 story to "the Great War," when it is set? Too grisly? "I've never heard of Ernst"?).

Altogether a delightful volume, as good to pick up now as when I was nine. Among the several more adult "Hitchcock" volumes I've picked up along with this one over the last week, my first hardcover copy of AH Presents: My Favorites in Suspense (1959), which reminds me that Patricia O'Connell ghost-edited at least this volume in the series, and which volume concludes with the Elisabeth Sanxay Holding novel The Blank Wall...I hope to be able to further Ed Gorman's cause on behalf of a Holding revival some more in the near future. 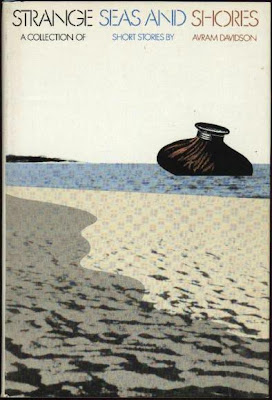 And, as I'm gathering also all the Avram Davidson volumes I didn't already own, so as to have the stray story or variant and prefatory matter, I've finally looked at the 1971 Doubleday edition of his collection Strange Seas and Shores...which has an introduction by Ray Bradbury. Which fact is not mentioned anywhere on the clumsily illustrated cover, even in the dustjacket flap copy, nor is the Bradbury authorship mentioned on the title page nor Even in the table of contents nor credited in the copyright acknowledgments page...the marketing genius juggernaut that was Doubleday in the '70s retains its luster. Because what you want to do, if you go out of your way to have a Bradbury introduction to a 1971 story collection, is hide it as much as possible.

For more of today's "forgotten" books, please see Patti Abbott's blog for the links roll and more. Your servant, from the land of upper respiratory distress...
Posted by Todd Mason at 2/25/2011 08:47:00 AM

I well remember these Alfred Hitchcock volumes from my elementary school days. I had a morbid taste in literature even at the age of 11. Can't believe there were kids' books back in the 1970s with stories like "Yours Truly, Jack the Ripper." But now look what the YA market is like.

I also recently acquired an Avram Davidson book (the Dr. Esterhazy stories) so I can sample his lightly erudite style you mentioned last week.

Hope your URI isn't too serious and you feel better soon.

Thanks, John. The Eszterhazy stories are perhaps his magnum opus, particularly the first set as collected in the ineptly-packaged Warner Books volume. But there is so much that is so impressive about Davidson's work.

Kids like shocking and lurid...certainly, the film magazines doted on by my peers in the '70s were as ugly as they thought they could get by with...and I certainly wasn't the only kid who liked NATIONAL LAMPOON better than any adult I knew in that decade...

I read the Hitchcock short story collections when I was a kid. Maybe that's why I'm a little off-center as an adult.

I prefer Robert Arthur's Hitchcock anthologies to Hal Masur's, although both provide plenty of great reading.

Brennan, Seabright, Bixby, Sturgeon, Wellman, Bradbury...just imagine a kid picking up this book and encountering those authors for the first time.

And Davidson was one of the greatest writers in any field, any time.

I will add the Hitchcocks to the box for you. I am grateful for the intro to Davidson even though I haven't read much yet, I've loved what I have read. Cheers!

George, I'm sure other matters can be blamed just as easily. The Hitchcock books certainly helped me!

Jerry, I'm surprised at how almost seamlessly the transition between the Arthur and Masur books went (and the O'Connell book, from my memory of the Dell paperbacks all those years ago, suggests it might be utterly comparable), though it's true the mix does change a bit between editors (Masur loves John Kefauver's black humor, for example).

The absolute least I could do, Kate! You're giving me Hitchcock anthos? That's a thorough cleaning! (Even in my greed I hesitate to ask, you sure?)

Davidson does remain my default choice for my favorite writer, albeit first among many near-equals.

Hi Todd, I've been semi-conscious with the flu and just now saw your comments on my AHP article; I appreciate the input. Putting together a bibliography is frustrating on too many levels. I'll get back to reviewing the individual books but my attention tends to bounce around.

I own of the few Random House YA anthos, the originals & some of the terrible paperback reprints. I read Monster Museum as a kid & loved that creepy, scratched up cover.

I can sympathize...I'm not quite clear of the last two weeks' worth of flu myself. I hope to pick up all the AH/"AH" anthos eventually, as well, but it is a bit like untangling bait-arthropods...what with the confusions Dell and the other have introduced into the process.

Best of luck...I'll keep watching your progress with this. Certainly, Peter Enfantino of http://barebonesez.blogspot.com/ has an uncompleted ms. devoted to all the iterations of the AH literary empire...perhaps we can jolly him into publishing what he has finished peacemeal, much as he's anatomizing MANHUNT and the Health Knowledge horror magazines (first, of course, having run through the MAGAZINE OF HORROR) piecemeal now.