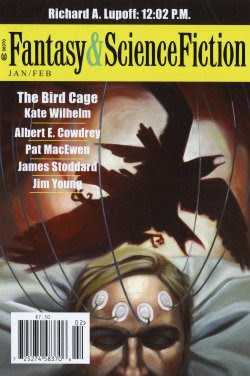 Richard Lupoff probably needs no introduction for most of the readers of this blog, but as a fiction writer, editor, publisher, historian, and critic he has moved from strength to strength for over half a century...with wife Pat Lupoff, Dick was the co-editor and -publisher of the highly influential fanzine Xero, among much else one of the birthplaces of organized comics fandom, and one of the relative few 'zines, particularly of its era (1960-62), to have a recent Best-Of published from its contents.... (Contributors to this volume range from Avram Davidson to Donald Westlake [bitterly "quitting" sf] through James Blish to Harlan Ellison [reviewing the film Psycho] to a young Ed Gorman and the rather bad doggerel of a similarly young Roger Ebert, who provides a new introduction). Lupoff was the editor of a series of Edgar Rice Burroughs reissues for the small Canaveral Press in the 1960s; published the pioneering All In Color for a Dime (with fellow comics 'zine pioneer Don Thompson), and began publishing his own fiction in the 1960s, including parodies, more broadly satirical work, sophisticated adventure fiction, and crime fiction and detailed alternate-historical fiction. His most recent books are the novel The Emerald Cat Killer and the crime-fiction collection Killer's Dozen (with an introduction by Gorman). He has reviewed books for Pacifica Radio, among others, over the decades, though (sadly) only infrequently drops by his old show, Bookwaves on KPFA, these years. Happily, he's using at least some of that saved time for more fiction. I told him about FFB, and while protesting that he had too many commitments to do anything too formal, did send along this brief review of a work he'd just read: 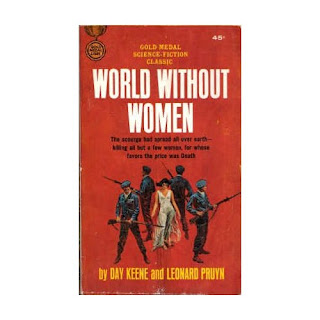 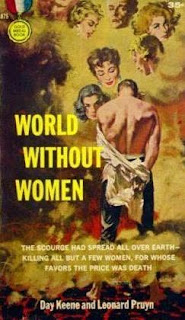 The main plot gimmick is much too obvious, much too soon. Odd pacing problems, too. At one point one of the surviving women decides to bake a cake. We're treated to two pages about how to do this. First gather ingredients, then stir batter, add flour, bake for so-many minutes at 350 degrees. Is this padding? What does the bear do in the woods?

Actually, it's more funny than annoying, except you find yourself laughing where the authors were not trying to be funny. That's very bad news.

Still, a fascinating and very readable book. Day Keene of course was an immensely prolific pulper and paperbacker, did a couple of hardboiled novels, wrote for radio and movies. Largely forgotten for several decades, he seems to be enjoying quite a renaissance thanks to Stark House, Ramble House and John Pelan's Dancing Tuatara Press.

Leonard Pruyn on the other hand seems to be something of a mystery character. What few details are known can be had from the great Bill Crider! [Not here, mind you, though Bill is discussing Keene in an archived page at Steve Lewis's Mystery*File. TM]

World Without Women was a Fawcett Gold Medal original. I've also seen an English-language reprint by a company in Israel. There may have been other editions, but I've seen only the two. --Richard Lupoff OK, for me to attempt to label this book "forgotten" is more than a bit of a cheat...not only was it published last year, even if by the relatively small but industrious (and never inexpensive) McFarland, but (unlike Malzberg's two brilliant collections of historical and critical essays, one an expansion of the previous one, and both unusually published by a major commercial publisher rather than a small or university press), it's still in print...and the only book I'm aware of that Amazon has offered to buy back from me (for a pittance, to be sure), presumably so that they could meet sudden demand. These are somewhat achronic essays on the state of the sf marketplace, somewhat divorced from time as presented here undated despite all coming from publication in the last decade in the Science Fiction (and Fantasy) Writers of America Bulletin, where the two columnists, who have taken on essentially every possible task in sf and closely-related writing, editing and publishing between them, conduct a regular dialog mostly about a given germane topic in every issue: foreign sales, myths and fallacies, the slow appearance of royalties when at all; the death of fiction magazines (and how well webzines pay in comparison, which has since become very dated, sadly, as Resnick's own editorial gig at Jim Baen's Universe has vanished along with that publication, the last so far of the very lucrative [for contributors], non-peripheral sf/fantasy webzine markets). It is both a how-to book on conducting one's literary career (and not solely in sf) and a casual history of the publishing industry (also not restricted to sf publishing). Barry is by nature more than a little pessimistic, Resnick certainly more the optimistic booster, though neither is terribly starry-eyed about the current state of publishing, as would befit two professionals who both began publishing in fantastic fiction, among much other work, in the mid 1960s; Malzberg suggests repeatedly in the columns collected here that he speaks with the Authority of Failure, and Resnick, one of the most consistently in-print and popular of the non-bestselling sf/f writers, with the Authority of Success...something that Resnick often tries to shrug off while moving onto another bit of practical advice, and (infrequently) misunderstanding Barry's usually quite sensible warnings as something rather darker. It's an excellent and useful book to read, and one could wish it was a more comprehensive selection of the well over forty columns the duo has published so far. I foresee this book falling out of print, though perhaps I misjudge McFarland, and being informative and entertaining long after its more immediate sorts of career advice are outdated. --Todd Mason

Please see George Kelley's blog for the round-up of links to others' "forgotten" books this week; roundelay originator Patti Abbott is scheduled to host the links again next Friday, after her return from a working vacation.
Posted by Todd Mason at 2/11/2011 06:01:00 AM

I'm a fan of Dick Lupoff's work. I have the early edition of WORLD WITHOUT WOMEN (although I really like the cover of the second edition). I'm not sure anybody has a fix on the business of SF or any publishing activity at this point. Apple estimates 34 million tablet PCs (iPads and iPad-clones) will be sold in the next three years. Add that to all the dedicted ereaders like the Kindle and the Nook and publishing will be transformed.

And not solely publishing.

What? There's only a handful of women in a world full of men and she's going to bake a fecking cake?! I think I'd be taking better advantage of the situation.

I think Dick agrees, Kate. Particularly with (probably) no risk of pregnancy...

Lots of work here, Todd and I do, of course, need the introductions.

Well, I'm happy to make them!