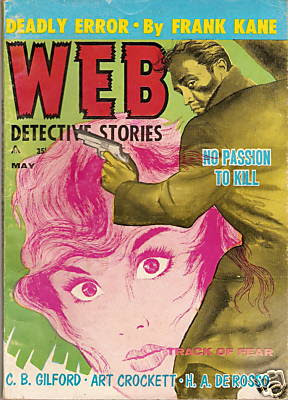 One of the less-inept covers for this magazine, which began life as a mildly interesting sf magazine and ended its run as a mid-'60s revival of "shudder pulp" (sadistic "Scooby-Doo"-style pseudo-horror fiction)...but in these years was the bottom-of-the-market for crime fiction. Note C. B. Gilford and H. A. De Rosso as two of its actually good contributors, slumming.

Here are the entries (that I've seen--please let me know if I've missed yours or someone else's) in this week's Friday's Forgotten Books...hosted this week here, and next week by George Kelley's blog, then Patti Abbott's triumphal return to ice-riddled Detroit and to hosting the links on her blog.

I'm the new one. You skipped over me. Prettysinister.blogspot.com

Rectified! Thanks, and welcome...

You're doing a great job, Todd. You're a natural host. I hope I can reach your high standard next week when I substitute host for Patti.

Thanks, George...I suspect if you spell everyone's name correctly, you'll do at least as well as I have today! Also, relatively few misdirected links to recipe sites or sex-dungeon webcams also helps.

I know that the Web Detective Stories began life under the name "Saturn," but what was the significance of the "Web" part? It certainly is one of those full-circle kind of phrases, seeing as how the phrase "stories on the Web" now has an entirely different meaning! Some other great names attached--Lawrence Block and Ed Hoch (http://is.gd/ZI5m0l).

Well, in the abrupt transition (probably to keep the same mailing permit, much as comic books particularly would make similar radical swaps in the '50s and onward), the magazine lost editor Donald Wollheim and added "Web" to make it sound a bit more noirish, I'm sure...they didn't want to just jump straight from SATURN SF to WEB DETECTIVE, I guess, for fear that would be challenged by the vigilant postal authorities...and given some of the content of WEB DETECTIVE and a whole lot of the content of WEB TERROR (the "weird menace" inpulpation it became in '62), these guys were almost certainly a little nervous about drawing too much post office attention. Though I suspect WEB TERROR particularly sold mostly on newsstands. (What do WEB TERROR and EVERGREEN REVIEW have in common? Some pretty tough descriptions...and some not too dissimilar illos, at least on the WT covers...)

Thanks, Todd. A great job.

Lawson: I suspect the use of "web" here is in the sense of a spider web, as just phrases as "web of crime", "web of desire", "web of lies" was common enough at the time.

I wish I'd had time to read and review something for this week's FFB, but alas I did not. I will have a pretty big New Arrivals post on Monday, however. (a bit of shameless self-promotion). What I did, and am doing as I type this, is listen to Grant Green. Right now it's his "Idle Moments" CD. Most is cool, but on some he really swings.

You're quite welcome, Patti, and thanks...who would I be to not at least ease the path of the obviously ineluctable utter domination of the web by the Abbotts? Do remember to bundle up on the way home!

Yes, indeed, Rick...web of deceit, etc. I might've misunderstood BV's query, since I've known of this magazine for years, and it seems fairly natural...far moreso, certainly, than SATURN WEB. Yes, in being professionally acceptable if unispired, this is one of the better WEB covers...WEB TERROR had one decentish cover, but that wasn't really what they were after by then...
http://www.philsp.com/mags/saturn.html
for the complete run of the covers for the title under all its forms.

And, you can be sure, this was not my FFB, but simply a reasonably catchy illo to highlight Peter's reprint of his old BARE*BONES magazine run through WEB DETECTIVE a decade back...

Grant Green was more consistent than Wes Montgomery (didn't have as much opportunity to Sell Out, or perhaps didn't need to as much to support a family), and certainly at least as much a guitar hero as Jim Hall or Joe Pass...or even hipster fave James "Blood" Ulmer...

Nice job with the link-wrangling, Todd.

That was one of the BEST Web covers? A scary thought.

Evan, well...the worst covers are an interesting mix of scary and just sad...and thanks.