For some reason, even though the links post was actually produced later, it's not appearing as the most recent post on most other blogrolls...please see the other links to Overlooked Films/A/V here. 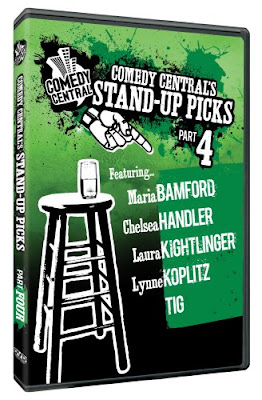 So, you're probably aware of Comedy Central, the cable channel that has flourished since the merger of the struggling Comedy Channel (which had Allen Havey's Night after Night and Mystery Science Theater 3000 and a lot of rather free-form clip shows) and Ha! (which had mostly sitcom repeats and a few original productions such as the gameshow Clash...the post-merger entity did much better with Win Ben Stein's Money, to say nothing of The Daily Show and its offshoots, and such surprises to the brass as Chapelle's Show); among the more durable showcases for comedians on CC has been Comedy Central Presents:, wherein a single comedian does a set for somewhere between 45 minutes and an hour and the Rick Mill Productions folks trim that down to about 22 minutes, so as to fit in the commercials and wraparound credits. The various corporate entities make these episodes available, via on-demand from cable companies and far more readily from online dealers such as Amazon; and they offer DVD-Rs of multiple episodes, such as this one first offered in 2008, the only one so far devoted to women comedians, which included two of my favorites before purchase (Maria Bamford and Laura Kightlinger), one I was barely familiar with (Tig Notaro, dubbing herself solely "Tig" for this segment, and a cast member of The Sarah Silverman Program), and two I liked well enough (Handler and Koplitz). It's an interesting set of choices, made perhaps because all five had some television exposure/steady gigs at the time (Bamford's were often in voiceover work on cartoons, such as PBS's charming-enough Wordgirl, though she had also been on The Comedians of Comedy series CC ran and abruptly cancelled, as well as in the two accompanying longform features/DVDs released from that tour), or just because they were seen as potentially the most commercially "hot" women comics in inventory (that all are conventionally attractive surely had no bearing on the selection, pardon me while I try to get my coughing fit under control). Bamford's set is charming, and a decent representation of what she does on stage or in her albums and one-woman shows (such as the fine Plan B or her web series The Maria Bamford Show, both available on DVD); Handler's presentation is bit more hostile than actually funny, though not too far from her sets I've heard of similar vintage (she seems more assured, and is probably a lot more secure, after having become the biggest draw on the E! cable channel). Kightlinger's set is challenging and definitely goes into the ultraviolet, or X-ray spectrum (quite literally when she prominently displays an image of her skull for a series of jokes), and she lets us know what she thinks of the posing she's asked to do for the bumpers by wearing a bondage mask. Koplitz's set is fairly typical of her approach as an apparent ditz who nonetheless isn't easily fooled; Notaro is her usual sly, very low-key self as she digs in and provides a nice mixture of one-liners and developed variations on several themes. CC and Rick Mill have done nothing here to provide the raw footage the episodes were cut from, and the language "blanking" (rather unnecessary for basic cable, but CC enjoys running these half-hours at all times of day) can be annoying, as are some of the edits. Nonetheless, I thoroughly enjoyed this disc...if not as much as the unmeliorated products from particularly Bamford, Kightlinger, and Notaro.

I've also sought out the Jackie Kashian CC Presents from on-demand, and thoroughly enjoyed that, as well (though it definitely suffers from the editing imposed on the set)...and her website has a nice bit of original animation prominently displayed, accompanying a bit Kashian has called simply "Funny Animal Joke"...you also will not suffer if you check out her podcast, recommended here previously and also prominently linked, The Dork Forest.

Meanwhile, another source of regular audio entertainment for me is WAMU-FM, the American University in DC's station's The Big Broadcast, an umbrella for vintage radio drama and comedy/variety that has been running weekly since 1964, and rules (in ratings) its four-hour timeslot on Sunday nights. Hosted for the last twenty-some years by DC radio institution Ed Walker, it regularly leads off with Yours Truly, Johnny Dollar, the radio version of Dragnet, and the radio Gunsmoke, then gets a little less predictable as to which series or specials will be represented. They stream the program live and archive the package for the following week in several formats...currently they are in pledge, but one of the advantages of the archives is that you can easily skip over anything you're not interested in (and the quality of the recordings used here is rather better than many one might hear at Archive.org or even in some of the commercial recordings issued on cd and in other formats). And if you're of a mind to, letting your national Congressional representatives know that you like public radio (and broadcasting) if you do, might help the various entities out in the current climate...
Posted by Todd Mason at 2/15/2011 08:14:00 AM

A big dvd of funny women sounds like a terrific mood elevator.

They are, even with the format-driven flaws enumerated, worth the $10 I laid down for the disc. Though I will in the near future be seeking out, for example, Bamford's other CCP episode...and the podcasts, by no means least of all Kashian's gracious hosting of THE DORK FOREST, are often at least as happifying.

I am in awe of your movie/AV knowledge, Todd!

Like most of my knowledge, a mile wide, sporadically deep...and don't wear your good shoes! Looking forward to your contributions, George.

Next Tuesday for sure!

The Big Broadcast sounds pretty cool, and more interesting than the old Bing Crosby movie, which is what I expected.

Indeed...I'd wondered whether the famous book on radio's dominant era had taken its name from the WAMU show, or vice verse...till I remembered the several BIG BROADCAST OF [year] films of the same era...

The editing down has always bothered me with these CC presents, but I might give it a try. Thanks Todd!

The talent carries the day.