Tuesday's Overlooked Films (and/or Other A/V): SEEING THINGS, Your 2 Favorite Films, WHOLPHIN among the short-film showcases...

Seeing Things was a 1981-1987 CBC dramatic series about a mildly hapless, somewhat neurotic newspaper reporter in Toronto, hung up on his ex-wife, coping as best he can with his courts beat, and cursed/blessed with an odd sort of extra-sensory perception. Louis del Grande co-created, co-produced and starred as Louis Ciccone (del Grande's career has mostly been in Canadian productions, though he did have a role in the film Atlantic City), with his wife Martha Gibson in the role of ex-wife Marge Ciccone; Janet Laine-Green played his best friend in the courts, Crown's Attorney Heather Redfern. The series was widely exported, and rather surprisingly played in the DC area on commercial television for a season or so in the mid 1980s, only to vanish and reappear on public stations a year or so later (with the last episodes now available...there were only 43 in all over the six-year run in Canada). However, as far as I know, the rather charming series, relaxedly playing with crime-drama, fantasy and relationship-hassle tropes, has never been released on home video, and might well've flown under the radar of most viewers in the U.S. Somehow, it struck me as the Canadian Magnum, P.I., only it was able to keep its initial high standard intact much better than the Yank series (and didn't drag itself out far too long...even if, obviously, the muddling-through middle class folks in Toronto wouldn't seem to have much in common with the mostly-toned hangers-on around the Kahala estate of a wealthy writer). Here's the first segment of a fairly typical episode (and, I should warn you, Seeing Things had one of the worst, if rather explicatory, theme songs in the history of all things televisionary):
Unfair question time: Which two films, however incongruous, would make up your two-favorite-film double-feature? The answers so far:
Alice Chang: Bound and Persona (the latter after a brief flirtation with Eternal Sunshine...).
Camilla Mason (nee Rocchi) (pondering briefly): Easter Parade and Gone with the Wind.
Jeri-Claire Mason: Heathers and Eternal Sunshine of the Spotless Mind.
Paula Mason (nee Skoe): Dune (the cinematic film) and Stardust.
Robert Mason: 2001: A Space Odyssey and Picnic.
"Ellen Canby": everyday film-viewing: Die Hard and Die Hard with a Vengeance (and when she's in certain moods, Queen Margot and Enchanted April)
Rick Robinson: The Wild Bunch and Apolcalypse Now
Kate Laity: (winnowing down from her suggestions and our conversations over the years): Suspiria and Bedazzled (though I suspect His Girl Friday might easily bump the first)

Selma Blair, facing "The Big Empty" Dave Eggers is a consistently bad writer, who nevertheless has not only achieved popularity with his bad writing but put at least some of the profits from that to often interesting, frequently beneficial ends. His projects to further literacy and provide interesting activities for bright kids in the SF Bay area and elsewhere are highly laudable; his magazine McSweeney's is not consistently good (a bad writer is not likely to be a reliable editor) though at times very good indeed (certainly the guest-edited Michael Chabon issues have been impressive); his Houghton Mifflin annual (apparently assembled with kids from his project), The Best American Nonrequired Reading, is consistently engaging enough, even if it can't quite make up for the quick disappearance of the Beacon Best annual (not that it was trying to, but it did appear shortly after that other fine project published its second and last volume). A launch off to the side of McSweeney's has been the video magazine Wholphin, the initial issue of which was offered wrapped up with the then-current issues of the literary magazine. That first issue was also an interestingly mixed bag, though the charmingly loopy "The Big Empty" with Selma Blair, an adaptation of Alison Smith's "The Specialist," a short story published in McSweeney's #11, and Miranda July's "Are You the Favorite Person of Anybody?" were for me the most memorable segments, with many of the others, particularly Patton Oswalt's brief bit of comic performance art with David Byrne, being at least pleasant and interesting enough. 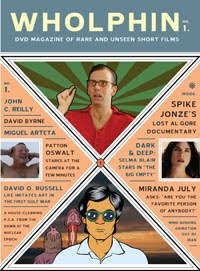 They have gone on to produce a number of issues since, as one of the more in-hand sources of short-film aggregation one can find of late...as opposed to, say, My Damn Channel or Funny or Die...or the various short-film showcases on PBS and independent public stations, and IFC and Sundance, too many of which seem to be slipping away...does anyone else remember the PBS weekly series, The International Festival of Animation, nimbly hosted by Jean Marsh?
Posted by Todd Mason at 2/22/2011 03:18:00 AM

I can't imagine why I don't remember that series at all.

Between the Windsor CBC station and whoever in Detroit might also have run it (if anyone), I imagine it was pushed a bit, but I suspect you might've had other priorities in the '80s. Have a pair of favorite films for the poll?

2 film favorites for a double feature. Hmm. I'll go with what hopped into the frontal lobes first:

APOCALYPSE NOW and THE WILD BUNCH

Well, there's a cheery pair! Thanks.

I really dislike Eggers in so many ways, and am doubly irritated that he was asked to intro the new Vonnegut collection, but he does put some of his huge cash piles to good use.

My perfect double feature would entirely depend upon mood. Could be Now, Voyager and Old Acquaintance, could be Holiday and Philadelphia Story, could be Opera and Suspiria, could be Bedazzled and Young Frankenstein or any of a billion more. Okay, I exaggerate slightly. Only slightly.

Even his introductions are frequently difficult to read, even if still better than nearly anything William Vollmann has drooled into print. Rather like John Irving only more publicly so, Eggers is bad (and frequently expressing at least some reprehensible attitude), but well-meaning.