For description of the Abbott vignette challenge, please see my previous post, and even better, see Patti Abbott's blog for the links to and posting of other participants' vignettes (which everyone else keeps referring to by that unnecessary and not terribly descriptive term "flash fiction"...it's fiction so flash, it should have its wig snatched--one anthology at least used the less undescriptive term "sudden fiction" to describe what has been called "vignettes" in literary terms for at least a century or three; there's a foolish notion about that a vignette "can't tell a story," but, as Algis Budrys used to note, "the manuscript is not the story"). 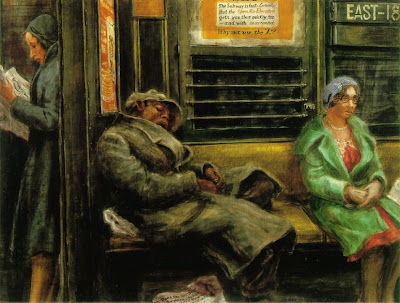 So I'm riding the eastbound train, because it's the day between Ash Wednesday and Good Friday, and apparently my bank is an observant Catholic, or maybe more likely Anglican or willing to insist as much, and it'll be closed tomorrow. So if I want to take Julia out Friday night, I have to go put the touch on Davy, my cousin, who owes me twenty bucks. If he hasn't blown his entire paycheck already (he gets paid every week...he doesn't get much more than twenty, but Julia and I aren't exactly going to drop in at Cafe Society or the Stork Club...but something a little better than the second-run film joint and a diner would be nice). I figure my chances of catching Davy at home are a lot better on Thursday night than on Friday, and I'm sure you'd agree if you knew Davy. Estelle really didn't know what she was getting when she married him, though she always sighs and says she went into this with her eyes open. Except at the track or around a poker table, Davy's a lucky guy.

Worst comes to worst, perhaps Estelle can stake me a fiver...and worst stays worst, I pay her the fiver back rather than make her take it out of her man's hide. She makes more as a legal secretary than Davy makes as a pipefitter, as he's still a journeyman, and she's at one of the whiteshoe firms. Estelle really should've just landed herself a lawyer. But I'll admit, Davy's a charmer...I don't think I'd let any of my other cousins get into me for twenty, unless they were sick or about to be evicted. Ten of it, no surprise, was to help him keep his arm in one piece, if arms are one piece. I'm not a total fool...I handed it over to the six for fiver myself. (Davy coughed up the rest of it, at least, all on his own. Miracles do happen.)

We go underground. There's this college-girl type standing in the doorway, reading the World-Telegram, she looks a bit like she could be Julia's sharper-featured sister...same coloring, just all acute angles on the nose and chin...I prefer Julia's smaller, rounder nose, and cheekbones that don't quit. Behind college girl, in the seat, a Negro man is snoring quietly, and next to him a woman who looks like she might be a secretary in a office that does some business; she's not wearing anything flashy-looking, despite a bright green coat. Aside from me, and a guy down the other end of the car by himself, that's all the people in the caboose...if subway trains have cabooses. That guy down at the end seems a little twitchy, and has a small bag he keeps putting to his face. I assume he has a flask or a small bottle of something potent in there.

About ten stops shy of Davy and Estelle's, this forlorn-looking young woman gets on, as the college girl gets off, and walks back to the middle of the car. I can't help but wonder if she's a streetwalker, though there's nothing flashy about her, either...she just looks tired in a certain way that I associate with poorly-paid hookers. Though maybe not...maybe she's just having a rough go. The twitchy guy definitely notices her, too, and after the next stop walks over and sits behind her. Offers her the bag. Apparently, it isn't booze...he's inhaling out of the bag. A cheap date. She doesn't take him up on his offer, which seems to annoy him, and he sees me watching, so he staggers up toward me.

"You finding you like the floor show, Mister?" he says, only slightly slurring his words. "You think you found your evening's entertainment? Well, this here's a magic act...for my next trick," he says as plops into the seat behind mine, "will be to knock your block off."

I don't say anything, just give him the eye. I'll let him talk himself out...he doesn't seem too intimidating. He takes a big blast out of the Sterno or whatever he has in the bag, and lets his head fall back for a few seconds, then brings his gaze back, more or less, to me. "You wanna hit?" He means the bag.

"No, thanks." He seems to take my rejection better than he had the tired woman's. More for him, I guess. He looks around the front of the car, as if he'd failed to notice the others before now. "Ha, the old man don't need none of this, him sawing the logs." The secretary stares straight ahead, not about to break out of her reverie. The pro, still back toward the middle of the car, is leaning her head against her hand, her elbow in the windowsill. Her turn to enjoy the floor show.

"'Why not use the 'L'?" he reads off, so he can't be so far into that bag yet he can't see, unless he's memorized the sign. "You know why I don't use the L, buddy? You remember that movie? With the big ape running around the city knocking over the L? That's why. You never know when some big ape is gonna come along..." He doesn't finish the thought, or perhaps he did. He takes a big slug of the fumes out of the bag...I could faintly smell it now, and I'd definitely guess Sterno. He then falls on the floor. "Why not use the L?" he says loudly, then again, shouting, "Why not use the L?!?"

The Negro man says, "Because I can't get a decent nap on the L. Too much light. Why don't you settle down, down there, and see what I mean?" The guy on the floor doesnn't reply. The secretary looks from the Negro man, to the twitch, then to me, smiles just a bit, and then begins staring off in the distance again, losing interest. A few minutes later, both the men are snoring. Back at the middle of the car, the pro has laid her head back, and has a slightly less grim expression on her face. We're just a handful of beautiful dreamers...what with me expecting to see some money back from Davy. That was how I leave them when I get off at the next stop.

I think this is your era, Todd. You seem to have the detail down. Two great stories, hard to pick my favorite so I won't. Thanks so much for your contribution to the cause.

I liked this painting a lot and almost chose it to work from. But I'm glad I didn't. I just know I couldn't have done as good a job as you did with this. Wow.

Thanks, folks! Patti, I'll probably take up your invitation and drop a sawbuck or two of my own on that (oh my) community service (or is that Organizing? Sinister Chord!) organization. I have got to get back into the fiction-writing habit, and these exercises certainly help. Even when I forget for the last third of the vignette to keep it in the present tense (now corrected). Hell, I might also offer a How did I flub at least a few telling anachronistic details squib for your series, if you like.

Yvette, I suspect your story based on this painting would be a joy to behold, and I'd encourage you to write it, if the painting particularly resonates with you.

Well, our antagonist is certainly lit up. As I mentioned after reading Patti's own contribution, with hers she went for a Damon Runyonesque piece, and I here go all Saroyan. But, as usual, I'd suggest that this one is no more literary than the other...and that as a vignette, it tells enough of the story (if anything sweeping Budrys wrote has stuck with me, "The manuscript is not the story"--the story is what whatever one has written exists in but can't entirely encompass--is it). I just bristle when presented with meretricious labels which are then insisted upon...see also, "slipstream". Thanks for taking the look.

I liked it. I has a great feel of time and place. Nice work Todd!!

Thanks, Jackie! Given your aversion to horror fiction, if you didn't read the other one, you might be ahead of the game...