A quick trip around some nostalgic bases for the season: 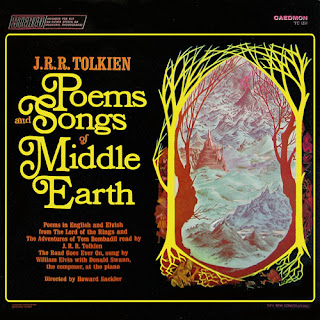 Was a fine if slightly unusual recording for Caedmon, the spoken-word label, to take on, given that half of it is Tolkien reading his poetry, some taken from the trilogy as published, some from the collection The Adventures of Tom Bombadil (most widely seen in the States at least as part of The Tolkien Reader)...and the other half is art-song settings of "The Road Goes Ever On and On" composed by Donald Swann, who is at the piano, with the improbably aptly-named William Elvin singing.
"In The Willow-Meads Of Tasarinan," Swann's best composition (along with "In Western Lands"), though "Errantry" below, which wraps the suite, is perhaps the most pleasantly reminiscent of Gilbert's partner Sullivan's work:

I had just begun to listen to art-song suites when I came across the Tolkien album, having fallen in love with the work of Mussourgsky...from his Songs and Dances and Death, a gender-switched performance of "Serenade" by Galina Vishnevskaya:


And, in keeping with the melancholic fantastic, here're some from Fairport Convention, first two from their most popular album (still perhaps insufficiently audited now), Richard Thompson's "Farewell, Farewell" and the folksong "Tam Lin":

And (an unfortunately "jumpy" video image for Art's Sake in the first) from the band's earlier recordings: "She Moves Through the Fair" and "It's All Right, Ma, It's Only Witchcraft"

"Better start worrying/Witchcraft's here to stay..." Werewolves, however, are more transitory:
...as can be young love, no matter how obsessive and tragic...

I was a big Fairport Convention fan back in the day. Their music still sounds good to me today.

My only regret is in not having a full recording of "Mediocre Fred," Pat Paulsen's song as recorded by the Smothers Bros., to poach here.

So, George, did you give the Vishnevskaya a tumble?