among the best stories I first encountered in K-12 textbooks: 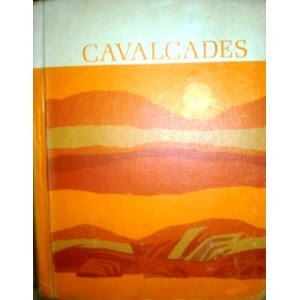 It saddens me to report that not a one of these below was actually assigned or read, as far as I know, by anyone in the classes but me, even when the text was in use in a classroom...though, for example, Ray Bradbury's "All Summer in a Day" was so employed, from the 7th grade text referred to below. More guidelines for our teacher to use the Bradbury, I suspect. And, of course, she recognized that name.

The Door in the Wall, a novella by Marguerite de Angeli, which won the 1950 Newbery Award, found in a paperback text anthology on sale at a W.T. Grant's for 33.3c ca. 1974

"The Summer of the Beautiful White Horse" by William Saroyan (the first chapter of My Name is Aram), which I first read in a slightly battered copy of a junior-high-school reading text when I was about ten or so.

A basketball novel by William Campbell Gault (probably not Showboat in the Back Court, but an earlier one), which was the final work in a eighth-grade text for slow readers (part of the Scott, Foresman Open Highways series, if I remember correctly) that I read when I was in fifth grade (having read a few of Gault's sports-pulp short stories in various auto-racing and other sports-fiction anthologies)

"The Joker's Greatest Triumph" by Donald Barthelme, in an American literature text from 11th grade...almost certainly also a Scott, Foresman...(we did read, in class, Arthur Miller's All My Sons from that text...)

"Los dos reyes y los dos laberintos" by Jorge Luis Borges, in Imaginacion y fantasia edited by Donald Yates and John Dalbor, a literature text for Anglophone Spanish language students I picked up as a remainder somewhere ca. 1979 (certainly not the first Borges I read, but the first Borges in the original...was even able to read it to my AP Spanish class with apparently reasonably good comprehension on my fellow-students' part) 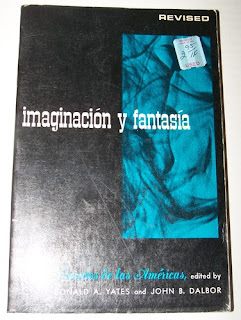 and, cheating a bit by citing classroom-use magazines rather than texts:
"Test" by Ted Thomas, reprinted in an issue of Read, the Xerox Educational Services magazine, ca. 1976

"The Battle of Chickamauga" by Ambrose Bierce, reprinted in either Scholastic Scope or Literary Cavalcade, the Scholastic Magazines publications, ca. 1976

Read through its ages... 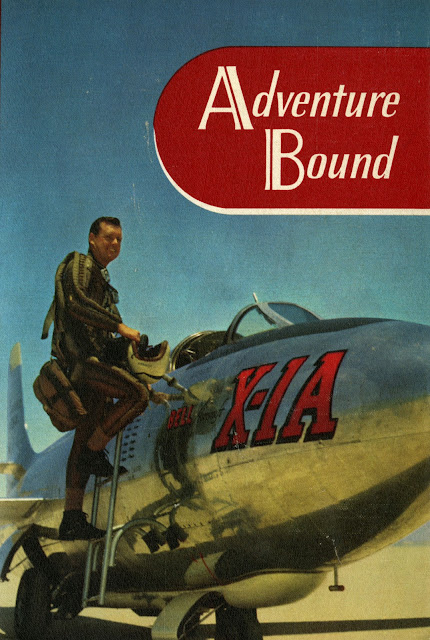 The 1950s textbooks I would occasionally collect, such as Adventure Bound (below left)  often seemed rather exotic. Certainly exuberant and expensively-produced. Earlier similar items often seemed very drab in comparison.
Posted by Todd Mason at 10/31/2011 01:36:00 AM

You read sf in school! In my time we didn't even know what sf was (I'm sure)!! My own English textbooks in school introduced me to the delightful, albeit shortened, works of Shaw (Pygmalion), Doyle (The Hound of the Baskervilles), Chekov (A Nincompoop), Dickens (The Pickwick Papers), Twain (Tom Sawyer and Huckleberry Finn) and, of course, Shakespeare as well as Whitman, Wordsworth, Donne, Yeats, Byron and Milton. I guess we have to thank the Brits whose influence lingered long after they left us.

By the way, Todd, thanks for the link to 3Cs on your blog — appreciate it.

The least I could do, Prashant, and thanks to you in turn. The Indian gradeschool/college system definitely is on the UK model, as well, clearly...ours is, as you've gathered, not too dissimilar (well, a lot of classroom time...how much education varies widely!). And certainly we read many of the folks you did in my various classes (I had to discover Doyle on my own, though that's rarely difficult in the Anglophone world...but I read his horror fiction before I read Holmes) and Dickens likewise ("The Signal-Man" being the first I read of him, as opposed to seeing adapted drama from his work), and I certainly tore through nearly all of Twain before he arose in any class.

My copies of the RAMAYANA and the MAHABHARATA await my perusal, among so much else...we did read NECTAR IN A SIEVE by Kamala Markandaya in high school...is she well-regarded at home? As you also might gather, the awareness of Indian literature in the States is, to put it kindly, limited, and often focused on Markandaya's more recent peers, many in the Indian diaspora, with some exceptions (Roy, for example).

There are several versions of the epics RAMAYANA and MAHABHARATA but the stories are more or less the same. I have never read Markandaya's novel and I'm glad you brought her up.

I agree Indian writers are now more visible in the States than at any time in the last century, with the exception of the late R.K. Narayan (I recommend his MALGUDI DAYS). I guess the credit ought to go to the top four Indian writers - Rushdie, Roy (as you pointed out), Amitav Ghosh and Vikram Seth (his GOLDEN GATE novel in verse form is outstanding).

Then the diaspora led by Anita Desai and her daughter Kiran Desai (who won the Booker for THE LOSS OF INHERITANCE), Rohinton Mistry (SUCH A LONG JOURNEY) and Jhumpa Lahiri (INTERPRETER OF MALADIES & NAMESAKE). I have deliberately left Naipaul out because he fits in neither category.

Yes, our education system is modelled on the Brit system - all theory, little practical; the standard of education is extremely high but it's doing us no good. The American system is better: it actually allows the student to put it to vocational use. Our schools instruct students to mug all the way to 10th standard. Happily, all that is changing now with the advent of several international schools.

Tagore is still read here, too, if not so much as he might be.

Alas, too much US education is practically about how to sit at a desk and be quiet.