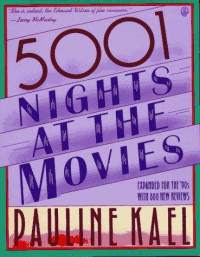 As the primary film reviewer for most of William Shawn's ever more self-indulgent reign as editor of The New Yorker, Pauline Kael's column in that magazine was always a bit of a mixed bag, and that's reflected in the 1984 edition (the expanded first paperback edition of the 1982 Holt hardcover)(the image here is of a later edition of the paperback) of her capsule review collection (as taken from the "front of the book" "Goings On About Town" section of the magazine's issues). She was better-educated in the other arts than, say, Siskel and Ebert, and grossly moreso than the likes of Gene Shalit and Rex Reed, to judge by their output, among the most famous film reviewers of their day (and she was one of the few with a level of comparable name-recognition), and had a trenchant wit at times; she also displays a snobbery toward whole fields of film that seems less marked by ignorance (given, for example, how often she returned to horror film as a subject of both these capsules and her longer reviews) than by a desire to comport with the snobbery of the perceived audience, which I'd say is even more pathetic. Driven as the contents of this book were, in part, by what the revival and more eclectic houses would offer in NYC, this volume has in some ways a wider and more engaging remit than the similar Ebert or even the Scheuer or Maltin tv-oriented volumes, ranging back through time but also outward to more foreign films and documentaries...even as some of her worst writing is snide dismissal of films such as Cat People (1942)--while praising aspects of this film, particularly, backhandedly. Some of her other worst is still-just celebration of the likes of High School (1968), bad in large part because it was cramped by her format, while her quick analysis of the strengths (at least for some of its audience) and weaknesses (all-around) of Billy Jack and similar films is rather good...better than the others are likely to come up with, even with similar short takes, if they were even to take on the likes of the cinema verite documentary or some of the more obscure foreign films represented here. Laboring under fixed ideas, some rather eccentric to be kind (her review of How the West Was Won is largely a forum for her resentment of this, of all films', insult to US history and notions of manifest destiny), she was never a critic for the ages, but by the too-often weak standards of film reviewing, she was certainly in the upper middle rank, even if overcredited as a paragon; she was neither Dorothy Parker nor James Agee, of course, but wasn't actually comparable, either, even if also by no means dismissable (both points her colleague John Simon was quick to make in reviewing her collected criticism).

I have a Bosley Crowther book I've been meaning to talk about, speaking of famous critics.
Next week, I think.

But I don't remember ever paying much attention to Pauline Kael. I always thought her a bit of a deliberate snob.

Still, it would be intersting to read her reviews in one fell swoop.

I'll be interested in your take on Crowther, whose work I liked much less than I liked Kael's (but am curious to have his virtues pointed out)...I recently read a compilation of a number of larger-newspaper reviewers' work from his term at the TIMES, and he actually struck me as having some of the same tics as she did.

And thanks...not only are you the first to comment, you are apparently the first and only to read this entry!

It's been a long time since I had a subscription to the New Yorker, probably the mid 1980s, and I'd only read it regularly for maybe 15 years if that. I don't remember the names on the film reviews, and usually skipped them at any rate, not being a big movie-goer. I did, however, greatly enjoy your review here, not so much for the subject matter as the way you dealt with it. Fine job.

Well, thanks, Richard! I guess I did come across as comment-grubbing, but very kind of you. I meant to also do one of Kael's longer-review collections (STATE OF THE ART), but didn't get a chance to read enough of it to do fair job. Amusing to me that last week's got a Huge response...the combination of Maio's title and the Ellison (and Shepard?) citations, I guess.

I need to revisit Kael. When I was in high school, she was one of the critics who made me want to write my own reviews. I didn't always agree with her, but even when I didn't, I remember he being one of the more fun critics to argue with. Her view points could be maddening, she was a movie snob, but at least she provoked a reaction in the reader. I never remember being bored by her remarks. A lot of critics you read and yawn, either agreeing or disagreeing, but never really caring. I still find myself going back to this, or one of her other collections (like I Lost It At The Movies), just to compare my thoughts with hers. I might very well end up slamming (gently, so as not to hurt the book) the book shut, but it always got me thinking.

Oh, I find myself disagreeing with critics I respect more, including John Simon, Patricia Aufderheide, Maio, Ellison, et al. They explicate their arguments (and usually not bland ones) better, with fewer bits of special pleading (she loved the likes of LAST TANGO IN PARIS and the latter-day SCARFACE, and not for particularly good nor well-explicated reasons) or crotchets (such as the hostility to HOW THE WEST WAS WON on the grounds that it's unpatriotic).

I like and respect Kael much more than you, I guess. I thought that a lot of her first book, I Lost It at the Movies, was unnecessarily negative about certain kinds of films and about most other film critics. (Andrew Sarris was probably not actually the devil incarnate). But I think that once she got to the New Yorker, she became a much more thoughtful critic.

I don't agree about the snobbery. Yes, she felt that anyone who disagreed with her opinions must be an idiot, but don't most film critics act that way? She certainly was not snobbish about what films she liked; it was her taste for what she called "American kitsch" for which she seemed to be most pilloried. She and, say, Dwight MacDonald were far apart on what made a movie a good movie; I think it is more appropriate to speak of MacDonald’s snobbery. (Although I think he was a pretty good critic in his own right.)

She did go overboard about some films, certainly. I thought Last Tango had some wonderful parts but it did not revolutionize cinema as she thought it would. None the less, as with Agee, I enjoy how enthusiastic she can be about films she loves. Also, as Cullen says, she was fun to read. She was almost always readable and amusing. There are things she wrote that I think are poor - I don't think much of , for example. But on the whole, I seldom found her less than entertaining.

Also, although it has nothing to do with her worth as a critic, she was reportedly amazingly generous with her time and advice to young people who wanted to be film critics. So many writers were influenced by her that they became known pejoratively as “the Paulettes". That in itself would be no mean legacy.

I seem to have lost half a sentence somehow. In my third paragraph, it should say:

I don't think much of The Citizen Kane Book, for example.

Yes, it was the emotional overinvestment that made her less of a critic than she should've been, more than anything else, that and the tendency, as I noted in the body above, to logroll the dismissal of certain kinds of films (I'm afraid I've managed to forget which horror film, for example, she credited with, close paraphrase "having a point, rather unlike most such films"...when there is no film that doesn't have a point to make, usually several, and she would do the typically foolish maneuver of deciding that anything that was a fully-fledged horror film wasn't really Just a Scare Film. Anyone who could burble over the majority of Bertolucci's work has no standing to making such exclusions. I appreciate that she was apparently very generous with her time in person, to younger reviewers and others, but again I'll continue to prefer the folks I cite as better critics, without, again, ever dismissing her out of hand (you certainly won't see a review here by me of a Rex Reed book). Notable that you found her book on the most beloved films her weakest...likewise John Simon's (perhaps undermined, as perhaps was Kael's) labor of love on Bergman is usually seen as his weakest work on film, as well. It might well be that, as with Damon Knight and Anthony Burgess, among the literary critics I loved best as a youth, their metier is in the short review column.

I read Kael in the 1970s and feel that she actually taught me a lot about how to watch films. She saw them in ways I hadn't thought of.

As for snobbery, I think she got me to see that film is most often not a great art form, but there are moments in them with aesthetic pleasures that aren't available any other way. And so she could like some things about a Hollywood film that I would dismiss altogether because the rest was crap.

She also got me to appreciate the relationship between the camera and individual performers - how the camera loves some more than others. I always looked forward to reading her reviews and missed her when she was on vacation (turning the column over to Penelope Gilliatt for six months and then finally retiring).

Fair enough, Ron...though any good critic might've done the same. That's what the job is all about.